Chairman Pakistan Peoples Party Bilawal Bhutto Zardari has strongly condemned the brutal murder of a lady singer Samina Sindhu, who was shot dead previous day while performing at a program near Larkana.
In his statement, PPP Chairman expressed sympathy with the bereaved family of Samina Sindhu and termed the incident an attack on centuries-old liberal and Sufi traditions of Sindh.

“The murder of an artist and a woman is a heinous crime which would not be tolerated by the society and influenced by the teachings of Sufi saints like Shah Bhittai and Sachal Sarmast”, he added.
Bilawal Bhutto Zardari appreciated the police for prompt arrest of the accused and stressed that the murderers of the innocent singer should be punished according to the law.

Pakistan Peoples’ Party Chairman Bilawal Bhutto said on Wednesday that his party will give an exemplary to Pakistan Tehreek-e-Insaf Chairman Imran Khan from Karachi. 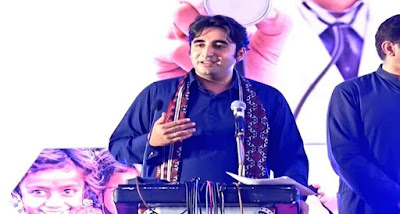 The PPP chairman arrived in Thar earlier today to inaugurate the newly-constructed Mai Bakhtawar Airport.
Bilawal, while challenging Imran to contest elections from Karachi, said that his party will defeat the PTI chief in the PPP stronghold.
He said that the PPP will win from the centre and Sindh in 2018 elections.
Bilawal said that the local body system is under the control of a specific party and that party is falling into infighting — in an apparent reference to Muttahida Qaumi Movement-Pakistan.
The PPP chairman said that the said party is neither doing this work itself nor handing it over to someone else.
Bilawal said that he wants people to vote for the PPP, saying that his party would change the face of Karachi.
The PPP chairman said that the issue of loadshedding in Sindh is a longstanding one, claiming the PPP government has produced the highest amount of megawatts compared to any other provincial government.
In March, Imran Khan had said that he will contest the general elections 2018 from Karachi.
http://www.thesindhtimes.com/sindh/04/imran-face-exemplary-defeat-ppp-karachi-bilawal/
No comments: Links to this post