The focus of the Chief Justice of Pakistan (CJP), Mian Saqib Nisar has shifted to the governance of other provinces as well. Khyber Pakhtunkhwa (KP) came under strict scrutiny after cases were filed in the Supreme Court (SC) against the claims of good governance. The province has been dealing with the problem of quacks in the guise of doctors, taking advantage of the innocence of the citizens. It was about time someone pointed that out to the Health Commission Chairman of KP Azar Sadar that drawing such a hefty amount in salary also has its responsibilities and if those responsibilities are not met, they will be held accountable as per law.
Health facilities are a huge concern in the province and the last five years have not witnessed a change in the sewage system and providing cleaner drinking water to the people of the province. Many are chanting in support of the CJP, and in light of the recent events, many also look up to him for solving the problems of the country. However the rightful concern in this matter is that the CJP is performing duties that the state officials are appointed to perform. If the CJP alone is going to fix matters, the resources being utilised by other organs of the government either need to be reconsidered or the organs need to step up and own the problems in order to address them.
The answer does not lie in one individual solving the problems for the state, rather they lie in strengthening the system to the extent that such sun moto notices do not need to be taken. At this point, since the problems are many and only one individual seems to be addressing them, the masses are under the impression that the judiciary is overstepping its legal bounds.
The solution is plain and simple, empower the current structure so that the appointed officials know that they will be held accountable if they do not perform. At this point in time, the entire scrutiny is too much work for the CJP alone. This is the kind of work that an entire government in place offers and should not be the job of one person only.

Watchdog alleges that burglars broke into house of editor of critical report on state of human rights in Pakistan.
Activists have raised concern over the security of rights workers in Pakistan following a "burglary-style raid" on the house of the editor of an annual report on the country's state of human rights.
The Human Rights Commission of Pakistan (HRCP) said in a statement that two armed men broke into the house of Maryam Hasan in Lahore on Thursday, just days after the release of the critical report she had edited.
The men "took away her laptop, two hard drives and two mobile phones, as well as some jewellery and cash", HRCP said in a statement on Friday.
The non-profit rights group added that the burglars told Hasan that they had also come the previous day, but left since she was not home at the time.
According to HRCP, the alleged perpetrators questioned Hasan about her profession and "intimidated" her in a "roundabout manner".
"HRCP suspects that the two suave raiders were no ordinary thieves and calls on the government of Punjab to apprehend the culprits and establish their identity, " the statement read.
I. A. Rahman, HRCP spokesman, said it is "clearly evident that the thieves wanted to intimidate Hasan".
"Their purpose was not just to commit burglary," Rahman told Al Jazeera in a phone interview from Lahore.
"Even from the things that they took, it shows that they had some other motive.
"Ordinary thieves are not interested in laptops and hard drives," he added. "The reports were all in there."
Rahman said he could not confirm if a police report had been filed on the matter as yet.

In its report, which was published on Monday, HRCP highlighted the "grim markers" of the state of human rights in the country in 2017.
In its yearly review, HRCP questioned Pakistan's commitment to protecting human rights in the country, despite being elected to the United Nations Human Rights Council for the 2018-2020 term.
The watchdog reported an increase in enforced disappearances, blasphemy-related violence and attacks on religious minorities in the past year.

It shows the vulnerability of each and every human rights worker and organisation and the rapid pace at which the space for such work is shrinking in the country.
REEMA OMER, LAWYER

Mehdi Hasan, HRCP chairperson, blamed Pakistan's "weak government" for not having an "effective hold on the society".
He said that "most" human rights violations that occur in Pakistan "are committed by the government institutions".
"So, you can't solve the problem, because the government itself is responsible for those violations," he told Al Jazeera in a phone interview from Lahore.
HRCP was established in 1987, with the aim of monitoring human rights violations and addressing them through lobbying, court interventions and public campaigns.

Human rights lawyers and legal experts expressed "shock" and "alarm" at the alleged raid.
Haider Imtiaz, a lawyer based in the capital, Islamabad, said the incident signalled a "change of status" in the country.
"It's deeply shocking because this now represents a bleak time," he told Al Jazeera in a phone interview, describing it as "an attempt to silence" those who "are critical of the state".
Reema Omer, international legal adviser at Pakistan International Commission of Jurists, said that in recent months there seemed to be an increased clampdown on activists in the country.
"On a number of occasions, state agents have subjected human rights defenders exercising their right to freedom of expression and peaceful assembly to excessive force and even prosecution under Pakistan's anti-terrorism laws," she told Al Jazeera.
"Others have been threatened, assaulted, forcibly disappeared, or even killed."
"If HRCP and its staff are no longer secure, it shows the vulnerability of each and every human rights worker and organisation and the rapid pace at which the space for such work is shrinking in the country," Omer added.
In its statement, HRCP said that it "will hold the provincial authorities responsible for any attempt by state or non-state actors to harass any persons associated" with its organisation.
"We have called upon our government to investigate this and find out who the perpetrators are," Rahman told Al Jazeera.
Both Imtiaz and Omer urged a "fair, credible and independent" investigation to show the real motives and perpetrators behind the alleged attack.
"The problem is we don't have proper investigations taking place, especially where organisations or individuals are being intimidated or harassed," said Imtiaz.
"They [organisations] are pointing towards unknown sources, which obviously point to certain institutions in the country and therefore, there is always a lot of speculation about it."

My party is representative of a democratic-socially just and modern Pakistan: Bilawal Bhutto 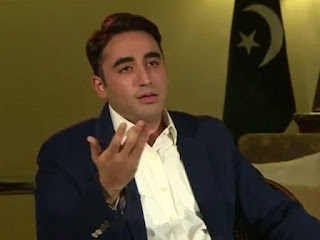 Pakistan Peoples Party (PPP) chairman Bilawal Bhutto-Zardari has said that the PPP did not choose to be dynastic rather it was brought upon the party. “My grandfather was killed, which forced my mother to enter politics, and she was assassinated, which forced me in,” said the young leader in an interview with the BBC’s Hardtalk.“I will not go into the merits or the demerits of dynastic politics,” said Mr Bhutto-Zardari when asked if the PPP was a party only of the Bhutto family. He said while it was true that dynastic politics had no place in modern democracies, it was a reality in Pakistan.He said the party that he co-heads with his father Asif Ali Zardari was representative of a democratic, socially just and modern Pakistan.When asked about who really runs the party — his father or Bilawal himself — he said the party made all decisions with consensus and no one person was in charge.To a question whether the PPP had forgotten its ideology, and what it stood for, he said the PPP had always been committed to democracy and that it maintained its roots. He said the party would look to his grandfather’s slogan of roti, kapra, and makaan to campaign for the elections.He claimed that the PPP’s opposition to the Tehreek-i-Taliban Pakistan (TTP) was the reason why the party did not do well in the 2013 elections. He pointed out that the TTP had specifically called out the PPP as its enemy, while openly supporting the Pakistan Muslim League-Nawaz (PML-N), the Pakistan Tehreek-i-Insaf (PTI) and the Jamaat-i-Islami (JI).He said the Taliban supported these three parties, calling them “allies” and gave them a “free hand” in the run-up to the polls. “My candidates were kidnapped; the prime minister’s son was kidnapped and the former governor’s son was also kidnapped.”He said it was not only the TTP that was out against his party, but also anti-democratic elements within the country: “We were not allowed to campaign, the political chief justice of the time — who has now gone on to form his own party — stopped my father from campaigning.”About the obstacles the PPP faced, Mr Bhutto-Zardari pointed out that no political actor anywhere in the world could have overcome the problems.“You have to have lemon and honey in your tea. I told my mother in our last conversation before she was killed. She had been campaigning across the country… she was a charismatic speaker and spoke from the heart – after a long campaign her voice had gone away,” said Mr Bhutto-Zardari remembering his last moments with his mother.Asked what the PPP thought of allegations of corruption and Asif Zardari’s image tarnished by corruption cases, the chairman answered that his father had spent over 11 years in prison “without a conviction”. He said the PPP had always fought for democracy against dictators. “Each and every single case brought against my parents — it took us thirty years, we fought it out. Each and every single case, they have been acquitted”.