In a tense showdown above the East River, the police arrested more than 700 demonstrators from the Occupy Wall Street protests who took to the roadway as they tried to cross the Brooklyn Bridge on Saturday afternoon. 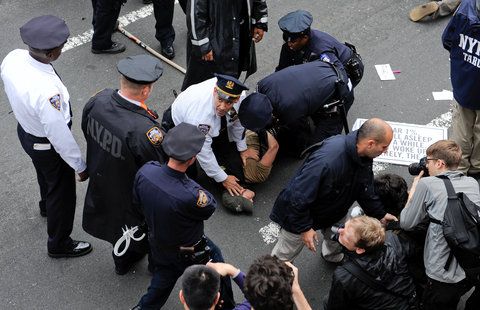 The police did not immediately release precise arrest figures, but said it was the choice of those marchers that led to the swift enforcement.

“Protesters who used the Brooklyn Bridge walkway were not arrested,” said the head police spokesman, Paul J. Browne. “Those who took over the Brooklyn-bound roadway, and impeded vehicle traffic, were arrested.” 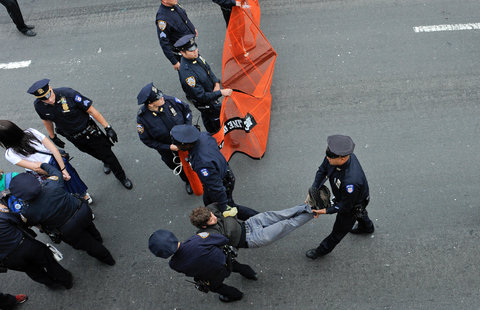 But many protesters said that they thought the police had tricked and trapped them, allowing them onto the bridge and even escorting them across, only to surround them in orange netting after hundreds of them had entered.

“The cops watched and did nothing, indeed, seemed to guide us onto the roadway,” said Jesse A. Myerson, a media coordinator for Occupy Wall Street who was in the march but was not arrested.Things came to a head shortly after 4 p.m., as the 1,500 or so marchers reached the foot of the Brooklyn-bound car lanes of the bridge, just east of City Hall.

In their march north from Zuccotti Park in lower Manhattan — headquarters for the last two weeks of a protest movement against what demonstrators call inequities in the economic system — they had stayed on the sidewalks, forming a long column of humanity penned in by officers on scooters. 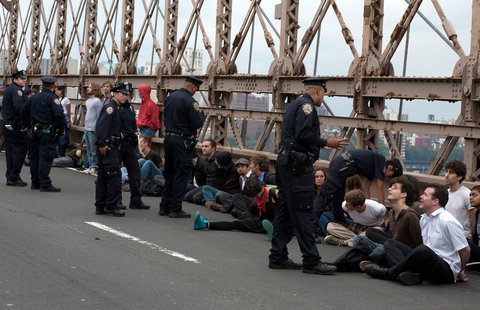 Where the entrance to the bridge narrowed their path, some marchers, including organizers, stuck to the generally agreed-upon route and headed up onto the wooden walkway that runs between and about 15 feet above the bridge’s traffic lanes.

But about 20 others headed for the Brooklyn-bound roadway, said Christopher T. Dunn of the New York Civil Liberties Union, who accompanied the march. Some of them chanted “take the bridge.” They were met by a handful of high-level police supervisors, who blocked the way and announced repeatedly through bullhorns that the marchers were blocking the roadway and that if they continued to do so, they would be subject to arrest.

There were no physical barriers, though, and at one point, the marchers began walking up the roadway with the police commanders in front of them – seeming, from a distance, as if they were leading the way. The Chief of Department Joseph J. Esposito, and a horde of other white-shirted commanders, were among them.After allowing the protesters to walk about a third of the way to Brooklyn, the police then cut the marchers off and surrounded them with orange nets on both sides, trapping hundreds of people, said Mr. Dunn. As protesters at times chanted “white shirts, white shirts,” officers began making arrests, at one point plunging briefly into the crowd to grab a man. 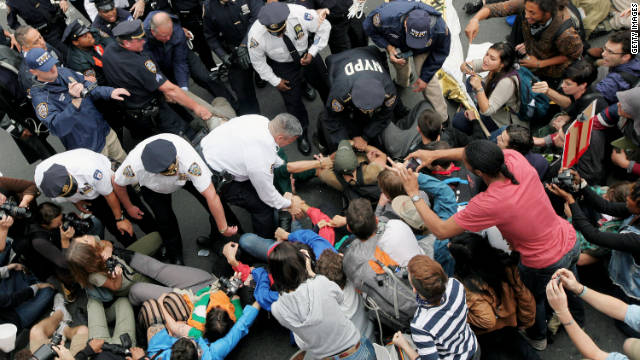 The police said that those arrested were taken to several police stations and were being charged with disorderly conduct, at a minimum.

A freelance reporter for The New York Times, Natasha Lennard, was among those arrested. She was later released.

Earlier in the afternoon, as many as 10 Department of Correction buses, big enough to hold 20 prisoners apiece, had been dispatched from Rikers Island in what one law enforcement official said was “a planned move on the protesters.”

Etan Ben-Ami, 56, a psychotherapist from Brooklyn who was up on the walkway, said that the police seemed to make a conscious decision to allow the protesters to claim the road. “They weren’t pushed back,” he said. “It seemed that they moved at the same time.”

Mr. Ben-Ami said he left the walkway and joined the crowd on the road. “It seemed completely permitted,” he said. “There wasn’t a single policeman saying ‘don’t do this’.”He added: “We thought they were escorting us because they wanted us to be safe.” He left the bridge when he saw officers unrolling the nets as they prepared to make arrests. Many others who had been on the roadway were allowed to walk back down to Manhattan.

Mr. Browne said that the police did not trick the protesters into going onto the bridge.

“This was not a trap,” he said. “They were warned not to proceed.”

In related protests elsewhere in the country, 25 people were arrested in Boston for trespassing while protesting Bank of America’s foreclosure practices, according to Eddy Chrispin, a spokesman for the Boston Police Department. The protesters were on the grounds and blocking the entrance to the building, Mr. Chrispin said.
No comments: Links to this post