#Pakistan - OP-ED: - The limits of populism

Khan said he would kill himself before begging for foreign assistance. Now his government is doing just the same.


It has been more than fifty days since the creation of Naya Pakistan. The hype, the promise and euphoria among the voters of Pakistan Tehreek e Insaf (PTI) is now taking a more somber turn as the hard realities of governing become clearer every day. While it is true that the PTI government has inherited formidable, if not intractable challenges, PTI is haunted by its populism, and it’s performance has been undermined by lack of preparation and a looming impression of incompetence.
Populist politics work well while a leader or a party is in the opposition. There is no responsibility but ample room to attack opponents (in power) and promise the moon. However, in Pakistan’s polarized political landscape, the myth of ‘popular mandate’ is also manufactured largely due to the mainstream media that was tasked with the project of presenting Imran Khan and the PTI as saviour[s]. This was good until the responsibilities of wielding power set in and now the media is getting increasingly divided on where the government is headed.
Take the case of tackling the balance of payments crisis. It was evident from day one that Pakistan would need to seek assistance from International Monetary Fund (IMF). But the government dilly-dallied for weeks largely under its own populist baggage. Imran Khan as the opposition leader had relentlessly attacked previous governments for ‘begging’ from foreign powers. To the extent that Khan said he would kill himself before doing that. Now his government is doing the same; and the finance minister has distanced himself from this stance.

The federal cabinet comprises a good number of Musharraf era team. The Punjab has PML-Q (the old Pakistan’s vanguard) as a major partner; and the old bureaucrats have new postings. Yet, the informed and the educated in Pakistan and overseas are somehow convinced that with jazba (passion) there are miracles in store.

In the process of eliminating ‘non-IMF’ options for financial stabilization, the government faltered and way too quickly. First came the visit to Saudi Arabia with the proverbial begging bowl followed by inaccurate claims of Saudis joining the China-Pakistan Economic Corridor (CPEC). Sympathetic media commentators and analysts went on a celebration spree until the Chinese and Saudis had to clarify that no CPEC festival was on the anvil. Not to mention the reckless statement by a minister on reviewing CPEC deals. China is perhaps the most reliable partner and friend of Pakistan and irking them for no reason was nothing short of a blunder. But this rhetoric continues.
The idea of writing a letter to the Indians without taking into account the political climate next door was also a miscalculation at best. There is little appetite in India during an election year to hold any kind of dialogue let alone mend fences. But the question is who advised the Prime Minister and why? The facts will emerge sooner than later but Pakistan did not earn any brownie points regionally or globally whatever the shrill rhetoric about an ‘obstinate’ India, not willing to talk, on the television screens.
Perhaps the populist positions of the past hurt the most when it came to cosmetics of the Imran Khan choosing not to live in the PM House. Travelling via helicopter was made into a big deal by the media simply because PTI and its hordes of self-righteous followers had made this into an issue for many years. And now their leader doing the same was a tad embarrassing. Auctioning cars for austerity resulted in 10% of the estimated amount and selling buffalos at PM House for a paltry sum were nothing more than gimmickry which cannot cover up the obvious: unpreparedness.
Worse, the affairs of the Punjab administration have exposed the mythology of Naya Pakistan. The police officials transferred for not obeying the political diktat and arresting the leader of the opposition in the parliament just before the by-polls are tricks that Pakistani state has been using through different regimes. The competence of Punjab Chief Minister is still under media scrutiny (TV journalists have been shouting that the CM doesn’t read files); and the thana-kuthcery politics of patronage is still the order of the day. Punjab is and will remain the biggest political challenge for PTI, and there is certainly more of the same impression thus far. If anything Shehbaz Sharif had set certain standards of efficiency which will be hard to meet by a minority government in the province.
The federal cabinet comprises a good number of Musharraf era team. The Punjab has PML-Q (the old Pakistan’s vanguard) as a major partner; and the old bureaucrats have new postings. Yet, the informed and the educated in Pakistan and overseas are somehow convinced that with jazba (passion) there are miracles in store.
The greatest manifestation of this flawed approach to a complex world is the building multi-billion dollar dams through public donations. The judiciary, the army and now the prime minister are all convinced that they can build dams in such a manner. Experts continue to remind that this is simply not possible but populism reigns supreme. Very soon this bubble will also burst like raising funds from overseas Pakistanis, China and the Saudis to service debts accumulated over the year.
It is still not too late. There are competent and experienced people in Imran Khan’s team such as Shafqat Mahmood, Dr Ishrat Hussain and many others who can tell their boss that the time for populism may be over. Jailing political foes, keeping mum on media controls, crackdown on activists and making unrealistic promises – such as building millions of homes each year – will only backfire when the ruling party goes back to electorate in a few years.
https://dailytimes.com.pk/310067/the-limits-of-populism/
No comments: Links to this post


In Pakistan’s history of curbs imposed on media, the spirit of defiance and revolution did occasionally seem to spring its head.

In 2013, Income Support Levy was imposed on net moveable assets which exceeded Rs. 10 million at the rate of just 0.5 percent but 99.9 percent of the parliamentarians, including the incumbent Prime Minister and his predecessor, did not pay it. The rulers do not pay due taxes and then beg for IMF's bailouts-obviously the conditions of IMF hit the poor and not them

Pakistani authorities detained and then released on bail a prominent human rights activist as she re-entered the country, although they withheld her passport, the activist said. Gulalai Ismail said she was returning from London Friday when immigration authorities at an Islamabad airport told her she was on a no-fly list. 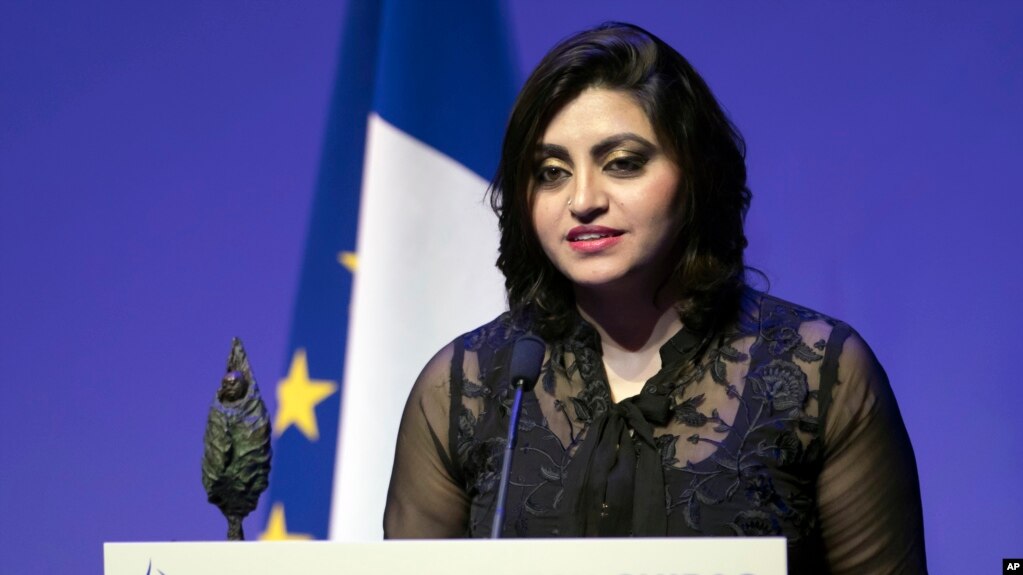 Talking to VOA's Deewa Service, Ismail said authorities could not explain to her which government department had put her name on the list, or why. In August, police charged Ismail and 18 other people with making anti-state comments and using inflammatory language at a protest rally in Swabi, in Khyber Paktunkhwa province.The rally was organized by the Pashtun Tahaffuz Movement, a party considered anti-military for its stance that Pakistan's military has used the fight against terrorism to carry out human rights abuses against Pashtuns in restive tribal areas and other parts of the country.The military has been carrying out operations in those areas, often under international pressure, to clear them of militant groups. PTM gained nationwide attention after the extra-judicial killing of a young Pashtun male model in Pakistan's largest city, Karachi. The suspect in the killing, police officer Rao Anwar, is out on bail. The case is still pending. Ismail denied charges against her."This is not an attack on Gulalai Ismail or PTM. This is an attack on civic freedoms, this is an attack on our liberty to speak out, this is an attack on our freedom of speech," Ismail claimed in an audio statement she sent to a WhatsApp group. Human rights activists who went to the offices of the Federal Investigation Agency, the government agency detaining Ismail, said they were allowed to communicate with Ismail."They were very cordial with us. I was pleasantly surprised," said one activist who did not want to be named. PTM says it has challenged the police report in court and a hearing is scheduled for later this month. Ismail is a women's rights activist and runs a non-governmental organization called Aware Girls.

The Tehreek-Labbaik Pakistan (TLP) is back on the streets. And this time it is threatening nationwide agitation. Indeed, in a confidence-builing move of sorts — to demonstrate that it means business — the party held simultaneous rallies in Lahore and Karachi. The one-point agenda was to call for Asia Bibi to be sent to the gallows. Khadim Rizvi, the TLP chief, has from the offset centred his so-called political credentials on the blasphemy question. Indeed, he hero worships the bodyguard who gunned down a sitting provincial governor over the latter’s support for Asia Bibi as well as daring to lobby for blasphemy law reform. Back in November, Rizvi and his cohorts held the federal capital hostage for three weeks over a clerical error in the Khatam-e-Nabuwwat. His critics are right to dismiss him as an opportunist. But this does not deflect from the fact that he knows how to work the crowds for political gain. The Faizabad sit-in certainly helped the TLP go all the way to the Sindh Assembly. This time around, Rizvi has his eyes firmly on today’s by-elections. This is to say nothing of attempts to undermine the Supreme Court’s (SC) probe into whether or not the party fulfils the necessary criterion to be registered as a political entity. Be all this as it may, the ruling PTI cannot afford to dismiss any of this as mere politicking. Not when Rizvi is threatening to prevent the government from functioning if he does not get his way regarding a poor Christian woman who has spent close to a decade in solitary confinement. By means of framing her possible acquittal as “an attack on Islam, the Constitution, and blasphemy law”. For to be clear, if he is allowed to succeed — at the front of the firing line will be the entire Christian community. Prime Minister Imran Khan must address this matter at the earliest; including the fact that the Lahore rally went ahead in violation of Section 144. But more than this, he needs to put an end to this dangerously cruel practice whereby calling for the execution of minorities is viewed as legitimate election campaigning. And this means booking Rizvi and the rest of the TLP leadership for hate speech. While providing Christians and Ahmadis with security wherever possible. This is the very least the Centre must do. Its previous missteps over the inclusion in and then subsequent firing of Dr Atif Mian from the Economic Advisory Council (EAC) naturally exacerbated prevailing trust-deficits. Thus inaction on the blood-baying TLP will likely prompt charges of state-sponsored terrorism by another name. And if that happens, we at this newspaper, will not beg to differ. https://dailytimes.com.pk/310106/tackling-extremism-2/
No comments: Links to this post