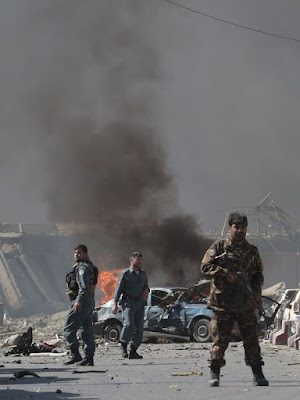 A massive car bombing in Kabul that killed at least 90 people Wednesday highlights the stark choices facing President Trump as he tries to alter the course of a war in Afghanistan that has dragged on for more than 15 years and is characterized by commanders as a stalemate.
The Taliban has grown stronger in parts of the countryside, and followers of the Islamic State are emerging as a growing threat. U.S.-backed Afghan security forces have been taking heavy casualties as they struggle to contain the insurgency.
The Taliban denied any connection to Wednesday's bombing. The devastation caused by a truck bomb triggered in a supposedly secure part of the city near embassies and government offices. The bombing is the latest example of how insurgents can infiltrate the country’s capital to wreak havoc. The attack appeared to be sophisticated and well-planned since the truck carrying the bomb got through multiple layers of security inside the city. "There could have been cooperation with Afghan security forces or, at a minimum, very detailed planning and coordination," said Jack Keane, a retired Army general.
The violence comes as the White House is weighing a request from military commanders to add more American troops to train and support Afghanistan’s security forces. NATO has about 13,500 troops in Afghanistan, including about 9,000 U.S. forces.
The top commander in Afghanistan, Army Gen. John Nicholson, has said several thousand more troops are needed to turn the tide of war there. He has described the war with the Taliban as a stalemate.
Trump traveled to Brussels last week and discussed the issue with his NATO counterparts, who are also being asked to boost troop levels. The White House has not yet decided on requests for more troops. “The major issue we’re facing is that with the status quo the war is not winnable," Keane said. "President Trump is facing an indefinite protracted war if nothing is done, and if we pull away Afghanistan turns back into a terrorist safe haven. Alternatively, we can do something that is decisive. The Taliban should have been defeated and a political settlement should have been reached years ago.”
Marine Gen. Joseph Dunford, chairman of the Joint Chiefs of Staff, said recently that NATO should be prepared to act quickly if more troops are approved, since Afghanistan is entering another “fighting season,” when mountains become passable and insurgents step up attacks.
“If the political decision is to do more, let’s do more as fast as we can,” Dunford said after meeting with NATO’s military leaders this month.
The bombing highlights the risk of withdrawing coalition forces from the country, said Seth Jones, an analyst at RAND Corp. "This attack does reinforce the precariousness of the security situation," he said. But the bombing is not necessarily a sign that the Taliban or Islamic State is gaining an upper hand over government forces, analysts say. Insurgents have launched bombings in the capital in the past, and Wednesday's attack does not suggest that militants are in a position to control major cities, which would be a more alarming development, Jones said.
"The fact you can get a bomb into Kabul doesn't mean the situation is worsening," he said.

Ninety people have been killed and 400 injured in a powerful car bomb blast that ripped through a diplomatic district in Afghanistan’s capital, Kabul, the government's media center has reported, according to AP.
The Afghan Interior Ministry previously said that 64 people had been killed, according to AFP.
The blast is believed to have come from a car bomb. Reuters reported that the powerful bomb was hidden inside a sewage tank on a truck. The precise target was not immediately clear, but many embassies and government buildings are located in the area.
Afghanistan’s President Ashraf Ghani condemned the devastating attack, which happened just days into the Muslim holy month of Ramadan. In a statement quoted by Reuters, Ghani said “the terrorists, even in the holy month of Ramadan, the month of goodness, blessing and prayer, are not stopping the killing of our innocent people.”
The blast struck at around 8:30am local time Wednesday.
Several hours after the attack, AFP reported that ambulances were still taking the wounded to hospital and rescuers were retrieving bodies from the rubble while firefighters struggle to extinguish flames in adjacent buildings.
The powerful blast destroyed more than 50 vehicles in the area, Pajhwok News reports.
Photos posted on Twitter showed a thick pillar of smoke rising from the site of the explosion.
Most victims are thought to be civilians, including employees of a local mobile phone company, Roshan, according to TOLO News.
Eyewitnesses on social media said the blast was so strong it shattered all windows in nearby buildings.
“At around 8.30am the room was shaken and then we heard a very huge explosion. It was scary, for a moment I thought we were attacked and the explosion was in our office,” Ramzir Bakhtiar, a Kabul resident, told RT. He said the diplomatic quarter where the blast actually took place is situated around 500 meters (1,600ft) away from his office, but the shockwave was so powerful that it still caused damage to the building.

© Mustafa Najafizada / RT
The BBC has confirmed in a statement that Mohammed Nazir, a driver who worked at the corporation’s Afghan office for four years, died in the explosion. Four BBC journalists were injured and taken to hospital.
Despite the high death toll among local residents, the foreign embassies have not reported any fatalities among their staff.
The German Foreign Ministry issued a statement saying that a local security officer guarding the embassy premises has been killed in the blast. Though several embassy workers were injured, all employees are now safe.
The car bomb went off in the close proximity to the diplomatic mission, the ministry said, adding that it targeted people who “worked for the better future of their country.”
German authorities said they would temporarily suspend deportations of failed Afghan asylum seekers or migrants following the blast in Kabul.
"The employees [at the embassy in Kabul] have more important things to do than to prepare the organizational measures needed. Therefore there will be no collective deportations to Afghanistan in the next few days," a German government official told Reuters.
"But it is and remains the case that deportations must be carried out according to our laws. This principle applies to Afghanistan, especially for criminals, and we will continue to go down this path," the official added.
The Indian embassy has said its staff is safe, though the building was damaged in the blast. Two employees of the Japanese embassy were mildly injured, suffering cuts, according to AFP.
In the meantime, France’s foreign minister, Marielle de Sarnez, said the French embassy in Kabul has been damaged, but there are “no signs” at this stage indicating that there were victims among the employees.
Hugo Llorens, charges d'affaires of the US embassy in Kabul, slammed the "horrific and shameful attack," saying Washington is committed to helping the Afghan government defeat "small but despicable and barbaric cults" that undermine security in the country.
Several journalists tweeted that their offices were damaged in the blast, including Jessica Donati, who writes for the Wall Street Journal, and the BBC’s Kabul bureau manager, Karim Haidari, who said the BBC staff were affected in the blast.
READ MORE: More than 50 feared dead in Taliban attack on Afghan forces base – US military
Taliban spokesman Zabihullah Mujahid said the insurgent movement had no involvement in the attack, according to Reuters. Mujahid claimed that the Taliban condemns indiscriminate attacks that cause civilian casualties.

© Mustafa Najafizada / RT
Last month, the Taliban announced the beginning of a “spring offensive,” promising to attack US-trained Afghan forces and foreign troops.
The other possible culprit, Islamic State (IS, formerly ISIS/ISIL), is yet to claim responsibility. In the past, the terrorist group launched several high-profile attacks targeting Afghan and foreign forces in various parts of the country.
The US has 8,000 troops in Afghanistan to train Afghan forces and render support during counter-insurgency operations.
No comments: