Video - Bilawal Bhutto announced jalsa on next week in Hazara

PPP was defeated in the 2013 elections through a plan: Bilawal Bhutto

Pakistan People's Party Chairman Bilawal Bhutto Zardari said on Saturday that the PPP was defeated in the 2013 elections through a 'plan'. 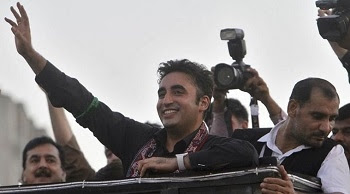 Every PPP government, Bilawal said, had served the common people. Addressing a public gathering in Chiniot, he said that the enthusiasm of the jiyalas shows that the party is all set to launch its election campaign with full fervour.Bilwal urged the PPP workers to get ready to defeat the PML-N. "PML-N is anti-labour, anti-poor and anti-farmer and the sole purpose of its leaders is to fill their own treasuries," he said taking a jibe at the PML-N.Hitting out at Nawaz and snubbing his recent statements, he said that the Supreme Court had disqualified him [Nawaz]."He [Nawaz] should explain who he is protesting against," Bilawal said in response to Nawaz Shairf's statements criticising 'conspirators' for his ouster. Separately, Bilawal said the party plans to introduce youth-friendly policies to help Pakistani youth to meet their aspirations and ambitions by throwing away all the hurdles and hitches in their way to progress and maximum utilisation of their potential.
No comments: Links to this post 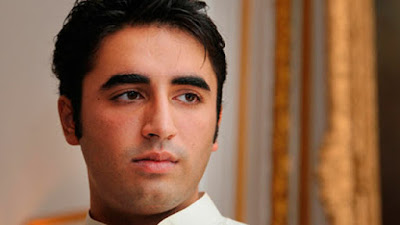 Chairman Pakistan Peoples Party Bilawal Bhutto Zardari has extended greetings to entire nation on 70thIndependence Day and urged that every Pakistani has to play his or her role create a great egalitarian role-model Muslim country as per the vision of our founding fathers.
In his message on the eve of Independence Day, the PPP Chairman said that 70 years age was enough for achieving maturity as a nation but dictatorships and their political prodigies have marred the level of our progress and achievements. “Democracies have been only small intervals in our history while most of the time the country had been under dictatorial or unconstitutional rules where masses were subjected to ruthless physical and economic atrocities keeping them under perpetual subjugation,” he pointed out.
Bilawal Bhutto Zardari said that people of Pakistan had been deprived of testing the fruits of freedom and independence. Enemies of the ideology of Pakistan let lose terror, heroine and Kalashnikov culture against the people to crush their dreams, he added.
Being the true torchbearer of the ideology of Quaid-e-Azam Mohammad Ali Jinnah, the PPP, he said, has suffered heavy price in the form of sacrifices of its leadership, workers and the supporters. But the struggle for the democratic and basic rights of Pakistanis won’t subdue, he vowed.
Bilawal Bhutto Zardari paid homage to the generation and its leaders which fought for independence and eventually achieved freedom through innumerable sacrifices of lives, properties and dignity. Today, we remember the heroes of independence movement and salute them for carving out a separate country for their next generations to thrive as a vibrant, progressive and strong nation, he added.
PPP Chairman said that we cannot forget more than 50,000 martyrs who laid down their lives in nation’s fight against terrorism, which was targeting common people, law enforcing agencies, students, women, and youth. “Right from schools to hospitals, garrisons to mosques, government to private installations, NGOs to political parties; the terrorists are targeting everything, which strengthen Pakistan,” he added.
Bilawal Bhutto Zardari called upon all the citizens of Pakistan to stand up against extremism, terrorism and their facilitators to safeguard the freedom and independence. “Pakistan has a great potential to lead the third world and Muslim Ummah into peace and prosperity. We all need to explore that potential,” he added.
He again felicitated the people of Pakistan on 70th Independence Day and promised them that PPP would do all it can to revive the Pakistan of Quaid-e-Azam.