Reham Khan speaks out in support of Bilawal Bhutto Zardari

Reham Khan, former wife of Prime Minister Imran Khan has spoken out in support of Pakistan People’s Party (PPP) chairman Bilawal Bhutto Zardari.
Reham took to Twitter saying, “There should be joint opposition support for Bilawal Bhutto stance and for the outrageous threats he is facing.”


She added, “Sensible voices must crush the mad rabid mouthpieces.”
Earlier, Bilawal had tweeted, “The government has responded to my demand to sack ministers associated with banned outfits by declaring me anti-state, issuing death threats and NAB notices. None of this deters us from our principle stand; form joint NSC parliamentary committee and act against banned outfits.”

‘Third generation of my family being put on trial’: Bakhtawar

Slamming National Accountability Bureau (NAB) cases against PPP leaders, Bakhtawar Bhutto-Zardari, daughter of former president and PPP co-chairman Asif Ali Zardari, lamented on Wednesday the third generation of her family is being put on trial with what she said fake cases.

Taking to Twitter hours before the scheduled appearance of the former president and PPP chairperson Bilawal Bhutto Zardari before NAB, she said: “This is the third generation of my family being put on trial with fake cases whilst skeletons of dictators are still untouchable. 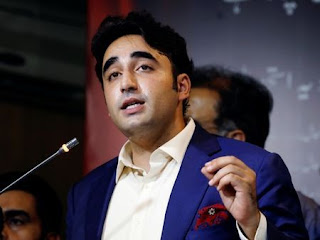 The leader of one of Pakistan’s main opposition parties, Bilawal Bhutto Zardari, accused the government on Wednesday of deliberately targeting political opponents after an anti-graft agency summoned him and his father for questioning.Hundreds of angry supporters of Bhutto’s liberal, secular Pakistan People’s Party (PPP) thronged the office of the anti-graft agency. Some of them clashed with police, chanting “Down with Imran Khan!” Khan is Pakistan’s prime minister.
“This isn’t a system of accountability. This is a system of political engineering. This is a system of the politics of revenge,” Bhutto told a news conference after being questioned at the headquarters of the National Accountability Bureau (NAB).
The NAB said in a statement an investigative team had quizzed Bhutto and his father Asif Ali Zardari for around two hours about three cases. It gave no details on the cases, but said both men had been given questionnaires to be handed back within 10 days.
Officials have previously told Pakistan’s Supreme Court that the cases were related to corruption and money laundering.
The family denies all accusations of corruption and says the cases have been fabricated for political reasons.
Bhutto, son of assassinated two-time prime minister Benazir Bhutto, said one of the cases he had been questioned about dated back to when he was a newly born baby.The transfer of the cases to the city of Rawalpindi from Karachi, where his party governs, showed bad intentions, he added.
FAMILY WOES
Bhutto’s party rules Pakistan’s southern Sindh province and came third in last July’s general election, which Khan’s Pakistan Movement for Justice (Pakistan Tehreek-i-Insaf) won.Bhutto’s mother Benazir was assassinated in a gun and suicide attack in December 2007. His father Zardari spent 11 years in jail before his release in 2004 on corruption and murder charges, which were never proved.
“These things aren’t new to me. I have seen this all as a little boy along with my mother visiting these accountability offices and these jails,” Bhutto said.
Bhutto says the latest corruption campaign against him and his fellow party leaders is intended to reverse provincial autonomy and divert regional funds to the federal government.
Opposition parties say Khan won power with the backing of Pakistan’s powerful military, which he and the army deny.
https://in.reuters.com/article/pakistan-politics-bhutto/pakistani-opposition-leader-bilawal-bhutto-accuses-government-of-waging-politics-of-revenge-idINKCN1R11S3
No comments: Links to this post

Chairman Pakistan People’s Party Bilawal Bhutto Zardari also wished a happy Holi to the Hindu community.
In his tweet Bilawal stated “Happy Holi to all my Hindu brothers & sisters,” “On the happy occasion of Holi, let us spread the wonderful message of peace and happiness,” he added.
View image on Twitter

BilawalBhuttoZardari ✔@BBhuttoZardari
Happy Holi to all my Hindu brothers & sisters. On the happy occasion of Holi, let us spread the wonderful massage of peace and happiness.
4,296
11:53 PM - Mar 19, 2019


Holi is a spring festival celebrated from 20-21 March by the Hindu community across the world. It is a celebration to welcome spring. Holi is also known as the “festivals of colours”.