Video Report - The latest results from the #Iowa #caucuses

Pakistan People’s Party on Sunday celebrated the birthday of the party leader and daughter of Asif Ali Zardari, Aseefa Bhutto Zardari in Karachi. 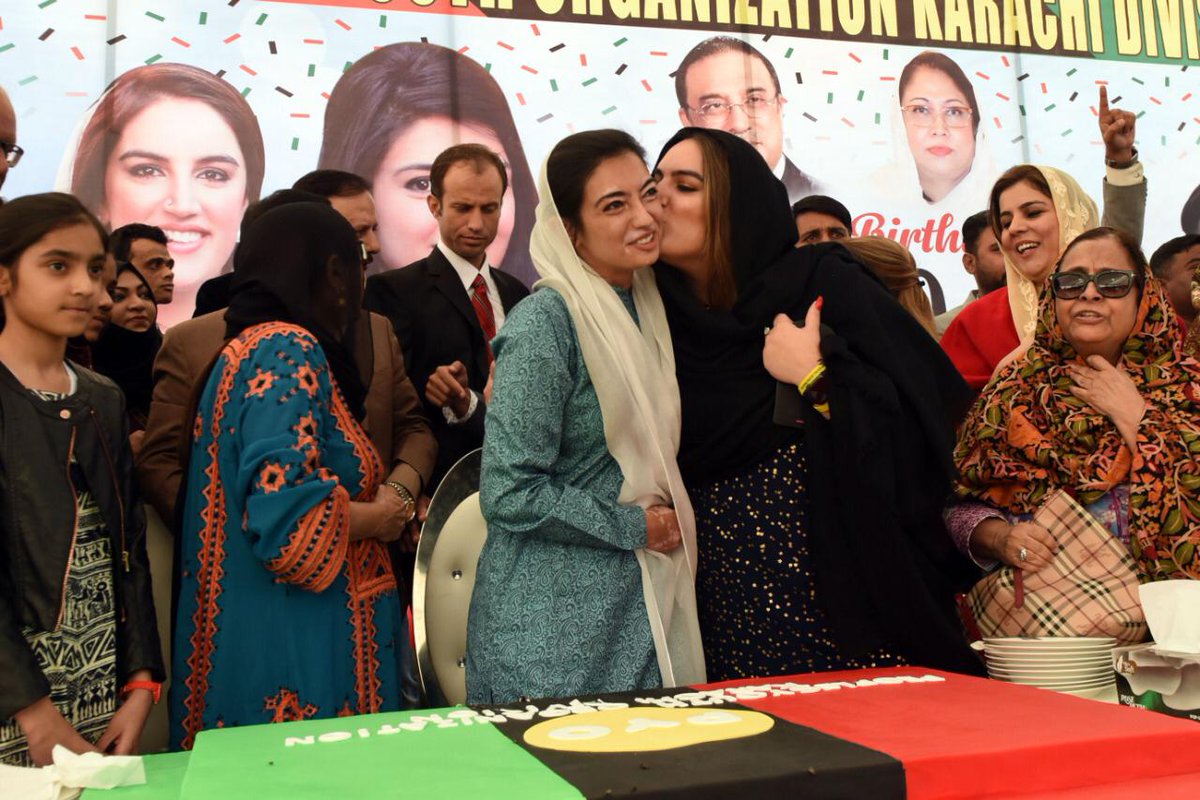 The event that was organized at the helipad of the Bilawal House Karachi was attended by Bakhtawar Bhutto Zardari, PPPP Women Wing President Faryal Talpur, Minister Health Azra Fazl Pechuhu and other party leaders.
The People’s Youth Organisation (PYO) office bearers including its Karachi chapter president Rashid Khaskheli and Information Secretary Fareed Memon that organized the event welcomed the guests at the venue. The PYO Sindh President Javed Nayab Leghari while addressing the event said that Aseefa Bhutto has not only played an important role in political arena but also in eradicating polio disease.
“It was due to her vision and efforts that the country is nearing to eliminate polio completely,” he said.
Later the guests along with Aseefa Bhutto Zardari cut the birthday cake. Aseefa applauded the PYO office bearers for organizing the event.
https://nation.com.pk/04-Feb-2019/aseefa-bhutto-s-birthday-celebrated
No comments: Links to this post

Sino-Pakistan Relations Amid the #Coronavirus Epidemic

The coronavirus outbreak revealed the weakest link in China-Pakistan relations: people-to-people ties.
The creation of the China-Pakistan Economic Corridor (CPEC), under which China plans to invest around $62 billion dollars in Pakistan, represents a “qualitative shift” in Sino-Pakistan relations, already touted officially as being “higher than the Himalayas…and sweeter than honey.” Alongside Chinese investments, the two countries have also seen an increase in the movement of people between them. These include Chinese workers linked to CPEC projects moving to Pakistan as well as students and entrepreneurs from Pakistan moving to China. It is this side of Sino-Pakistan relations, which involves citizens from both countries, that has come under great stress in recent days.
The global crisis created by the emergence of the novel Coronavirus 2019-nCoV in Wuhan city, capital of the central province of Hubei, China, has affected citizens from both countries along with the rest of the world. According to the latest data, in China so far 17,491 cases have been confirmed and 361 deaths reported (these figures are constantly changing).
Adding to worries over the outbreak, Wuhan, which has an approximate population of 11 million, hosts international students from various countries, including Pakistan. In Hubei province, where the virus originated, 21,371 international students have been registered.
China’s Ministry of Education (MOE) in 2018 reported a total of 492,185 international students in China from 196 countries who were pursuing studies in 1,004 higher education institutions. Out of these, 28,023 students were from Pakistan, the third-highest total of any country.
As the number of confirmed cases and death toll grew, the central government in China decided to take drastic steps to control the disease’s spread and put Wuhan under quarantine. What started out as restrictions on the movements of 11 million people soon progressed to the quarantine of at least 50 million to prevent the spread of the virus.
In light of the emerging situation, the United States arranged for its citizens to be flown out of Wuhan despite China’s efforts to contain the spread of the disease through quarantine. The United States was soon followed by other countries such as Japan, the United Kingdom, India, Bangladesh, and others.
In the midst of these developments, the Foreign Office (FO) of Pakistan announced that 500 students from Pakistan were stuck in Wuhan. Subsequently, four of those students became infected with the coronavirus. In light of the situation, the Pakistani government formed a “Technical Committee” to monitor developments and on January 30 decided not to follow other countries in evacuating their citizens from Wuhan. Their decision was claimed to be in solidarity with China for the greater good of people in Pakistan and the world at large, so as to control the spread of the disease. Pakistan’s government hence demonstrated their full trust in measures taken by China in handling the coronavirus and “stands firmly with Chinese brothers,” entrusting Beijing with the welfare of Pakistani citizens inside China.
The FO estimates of 500 Pakistani students in Wuhan has already been disputed by some of those living inside China, who believe 2,000 is a better estimate. Already in a state of great concern, these students and their families viewed the Pakistan FO account in a state of panic. If their government didn’t even know how many Pakistani citizens were actually studying in the area, then what hope was there they would be provided any help in the future?
Some Pakistani students used their accounts on social media, such as Twitter, to raise awareness about themselves and their situation. As a result, private media channels in Pakistan were alerted and began to share news items related to the students on their digital platforms. Soon news of the plight of these students spread inside Pakistan, with opposition parties raising calls for their repatriation in Parliament.
This series of events related to the coronavirus, which unfolded over the course of just a few days, has exposed the soft underbelly of Sino-Pakistan relations: its people-to-people connections. There are no clear figures as to how many Chinese citizens are currently in Pakistan. A recent report pointed to a figure of 4,000, with some gone back to China for the Lunar New Year. Some of the Chinese citizens still in Pakistan have reportedly visited hospitals with suspected cases and been given the all clear.
The position of the Pakistani government, as of this writing, was still that they were not going to remove any of their citizens from China, entrusting their care instead to the Chinese government. How long they will be able to hold this position is difficult to guess. What is certain is that this is a delicate time in Sino-Pakistan relations in that it involves the welfare of each other’s citizens. If not handled with care, it could potentially rupture the already fragile relations among people in both countries.
https://thediplomat.com/2020/02/sino-pakistan-relations-amid-the-coronavirus-epidemic/
No comments: Links to this post

At 24 years old, Samia Yousaf was forced into marriage. She was promised an escape from poverty in Pakistan, but her new Chinese husband abused her, denied her food, and eventually separated her from her own baby.

Horrific human trafficking stories such as these are common among young Christian women from Pakistan. And because religious minorities, especially Christians such as Samia, are disproportionately affected by such traffickers, their plight is also a religious freedom issue.
National Human Slavery and Trafficking Prevention Month has come and gone, but we must not cease to call attention to the plight of the 24.9 million people around the world who are affected by this scourge. Human trafficking is an affront to human dignity, and countries that suffer from it are obligated to do everything in their power to prevent it and end policies that directly contribute to the commercial sex industry. Forced marriage is one form of human trafficking, a broad umbrella term for any exploitation of individuals using force, fraud, or coercion.
The forced marriage pipeline from Pakistan to China was recently highlighted by a newly uncovered list of 629 Pakistani women and girls sold as brides to Chinese men and taken to China. Pakistani investigators painstakingly gathered this information, which points to an alarming trend in the lucrative crime of human trafficking — the targeting of Christians in Pakistan. For Pakistan, ending this barbaric trade means protecting religious freedom and ceasing the marginalization of Christian communities, which makes them easy targets for foreign traffickers.
Christian communities are among the poorest in Pakistan and have high illiteracy rates. They are often relegated to menial jobs as laborers and farmhands. In Lahore, the country's second-largest city, Christians take most of the jobs as sanitation workers and street sweepers, which further stigmatizes them. Christian communities are often geographically segregated from their Muslim neighbors into rural villages or urban ghettos.
Chinese traffickers are targeting these marginalized religious minorities. Traffickers approach impoverished families and offer to pay parents to marry their daughters off to Chinese husbands who will take them to a new life in China. The burden of poverty and social marginalization felt by some Christians drives them to accept this offer out of desperation. Brokers who arrange these marriages have even paid pastors to encourage their congregants to marry their daughters off to Chinese men.
What happens to these brides in China is tragic. Some are abused and isolated. Others are forced into prostitution. In one case, a Pakistani woman escaped back to Pakistan after only two months of marriage in China. She returned malnourished, weak, and unrecognizable. A few weeks later, she was dead.
China’s disastrous social policies have exacerbated the situation. Its one-child policy, combined with its cultural preference for sons over daughters, led to the killing of many female babies and created a severe shortage of women to marry. Now, Chinese traffickers are preying upon foreign populations to secure brides.
The Chinese government is an expert at concealing internal problems, and the scourge of human trafficking on its border is no exception. Pakistani investigations into hundreds of cases came to a halt in November due to fears of damaging Pakistan’s beneficial economic relationship with China. The Chinese government should stop denying that the problem exists and instead work together with Pakistan to end the flow of human trafficking across their shared border.
The U.S. State Department’s 2018 Report on International Religious Freedom cited claims that the Pakistani government is “inconsistent in safeguarding against societal discrimination and neglect, and official discrimination against Christians.” The government of Pakistan has shown an unwillingness to protect and assist its religious minorities — especially vulnerable women such as Samia. It’s time for that to change.
Pakistan’s failure to protect religious freedom has allowed its Christian minority to become vulnerable to foreign traffickers. That is cause for alarm. The government should be making a better effort to combat the stigmatized status of Christians and ensure they are treated equally in Pakistani society. The scourge of human trafficking is complex to address, but part of Pakistan’s solution should be to improve social and cultural respect for the religious freedom of its minority groups.
By working together, advocates fighting human trafficking and religious persecution can better achieve solutions to both issues.
https://www.washingtonexaminer.com/opinion/op-eds/pakistan-religious-discrimination-is-enabling-human-trafficking
No comments: Links to this post