Press Freedom Under Siege in Pakistan: Where to Next? 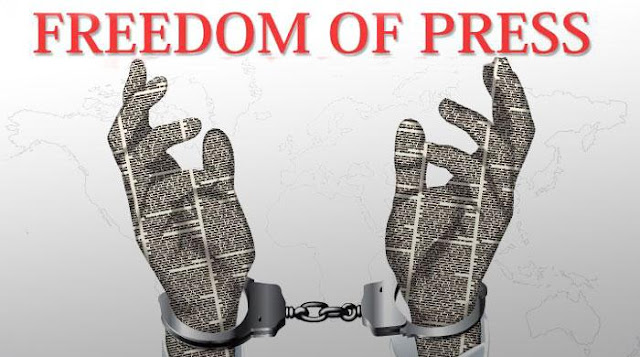 Pashtun Tahafuz Movement (PTM) leader Manzoor Pashteen was denied entry to Balochistan Monday, The Express Tribune reports.
Pashteen is facing a 90-day ban on his entry into the province. The curb comes two days after the Sindh government carried out a similar ban on him. The Sindh government was forced to withdraw their ban after protests on social media.
According to media reports, the Pakistan government called him a threat to security, saying his entry was restricted due to his hate speech and incendiary statements against the state and its security institutions.
PTM, which has been agitating for several months over “forced disappearances” and other severe human rights violations, especially in the Khyber-Pakhtunkhwa and Balochistan provinces, has largely been ignored by the Pakistani media because of the crackdown by the pro-army Imran Khan government.
PPP spokesperson Farhatullah Babar tweeted, “CM Sindh has ordered withdrawal of expulsion order of Manzoor Pashteen. Thank you Chairman BBZ, CM Murad. It is not victory of one and defeat of other. It is triumph of sanity over insanity. All have shown maturity. Am confident that PTM also looks at it like this.”
No comments: Links to this post

US Adds Pakistan to Blacklist for Religious Freedom Violations

The United States said Tuesday it has added Pakistan to its blacklist of countries that violate religious freedom, ramping up pressure over its treatment of minorities.
Secretary of State Mike Pompeo said he had designated Pakistan among "countries of particular concern" in a congressionally mandated annual report, meaning the U.S. government is obliged to exert pressure to end freedom violations.
Pompeo a year earlier had placed Pakistan on a special watch list - a step short of the designation - in what had been seen as a U.S. tactic to press Islamabad into reforms.
Human rights advocates have long voiced worry about the treatment of minorities in Pakistan, including Shiites, Ahmadis and Christians.
But the timing of the full designation may be jarring as it comes after Pakistan moved to resolve its most high-profile case, with the Supreme Court in October releasing Asia Bibi - a Christian woman on death row for eight years for blasphemy.
The government recently charged a hardline cleric, Khadim Hussain Rizvi, with terrorism and sedition after he led violent protests against Bibi's acquittal.
"In far too many places across the globe, individuals continue to face harassment, arrests or even death for simply living their lives in accordance with their beliefs," Pompeo said in a statement.
"The United States will not stand by as spectators in the face of such oppression," he said.
Nine countries remained for another year on the list of Countries of Particular Concern - China, Eritrea, Iran, Myanmar, North Korea, Saudi Arabia, Sudan, Tajikistan and Turkmenistan.
The United States removed one country from the list - Uzbekistan-- but kept it on the watch list.
Pompeo also put on the watch list Russia, adding another item of contention to the relationship between the two powers.
Russia has increasingly drawn concern in the United States over its treatment of Jehovah's Witnesses, the heterodox Christian group known for proselytization.
Also on the watch list was the Comoros, the Indian Ocean archipelago that is almost exclusively Sunni Muslim.
https://www.voanews.com/a/us-adds-pakistan-to-blacklist-for-religious-freedom-violations/4696017.html
No comments: Links to this post