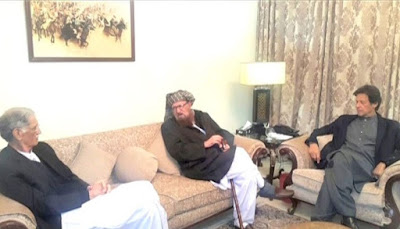 The PTI and its leader are perhaps politically insignificant, but conceding space to such Ziaist propaganda has the potential to radicalise the nation, especially our youth. Fortunately, Mr Khan is not perceived as an American stooge — he is seen as a Taliban apologist

“The lowest form of popular culture — lack of information, misinformation, disinformation, and a contempt for the truth or the reality of most people’s lives — has overrun real journalism. Today, ordinary Americans are being stuffed with garbage” — Carl Bernstein, US journalist.

Perhaps ordinary Pakistanis are not much better off either. But it is not just the journalists embedded with the jihadists who are peddling nonsense. Among the politicians, Mr Imran Khan keeps outdoing himself in the craft of black propaganda. He has been stuffing people with this Goebbels-speak for years and, unfortunately, the western print media is one such avenue he uses to push his outlandish assertions.

While the Tehrik-e-Taliban Pakistan (TTP) spokesman, Muslim Khan, had the dubious courage to clearly own up to the savagery of his outfit, Mr Imran Khan, who is the head and de facto chief spokesman of his Pakistan Tehreek-e-Insaf (PTI) party, stoops to the lowest levels of skulduggery in defending Taliban atrocities. Sheer disinformation, misinformation, contempt for truth, and an utter disregard for the realities of people’s lives, particularly of the Pashtuns, are what Mr Khan’s spoken and written words are all about.

He seems to have perfected the art of repeating half-truths and quite often just plain lies over and over again. In his article ‘Don’t blame Pakistan for the failure of the war’ (The Times, UK, July 27, 2010), he has some real gems to share. He writes: “Before the West invaded Afghanistan, my country had no suicide bombers, no jihad and no Talibanisation.”

Perhaps Mr Khan had been too busy playing cricket to take note of al Qaeda’s activities in the early 1990s at Abdullah Azzam’s Maktab-al-Khidmat — a base camp in Peshawar for Arab jihadists. Ayman al-Zawahiri and Osama bin Laden met each other in Peshawar courtesy Professor Azzam. Suicide bombings were not a norm then, but Azzam himself was killed in a car bombing in November 1989, allegedly orchestrated by his more extremist friends. He disagreed with their concept of takfir, i.e. declaring people who did not meet their definition of Muslim as infidels, who they believed deserved to be murdered. Benazir Bhutto, Dr Najibullah, several Arab rulers and Muslim minorities were placed in this category.

The early 1990s were the formative years of world jihadism and these men in Peshawar were not confined to just Afghanistan. The Afghan-Arabs, as they became known, worked hand in glove with all varieties of Pakistani jihadists and after 1992, Afghan territory was used for their cause. For example, training and sanctuary were provided at the Al-Badr camp in Khost to terrorists who unleashed havoc in Pakistan and around the world.

Mr Khan has completely glossed over the terrorist acts of the jihadists trained in the Pak-Afghan border regions. Riaz Basra of Lashkar-e-Jhangvi was one such figure who was involved in over 300 acts of terror on Pakistani soil, including an attempt on Mian Nawaz Sharif’s life, way before the US forces had set foot in Afghanistan. Along with Akram Lahori and Malik Ishaq, Basra had used the training facilities in Sarobi (near Jalalabad). This was the beginning of Talibanisation in Pakistan.

While the terrorist cadres were trained in Afghanistan, their leadership was groomed at various madrassas in Pakistan. However, Mr Imran Khan is either ignorant of this fact or is protecting such nefarious characters when he writes, “Until that point [army action in FATA in 2004], we had no militant Taliban in Pakistan. We had militant groups, but our own military establishment was able to control them. We had madrassas, but none of them produced militants intent on jihad until we became a frontline state in the war on terror.”

Only two entities from what is literally the Ivy League of the jihadist network need a mention to refute Mr Khan’s claim. Karachi’s Jamia Islamia aka Binori Mosque has produced hundreds of jihadist leaders that include Maulana Azam Tariq of Sipah-e-Sahaba, Qari Saifullah Akhtar and Maulana Fazlur Rahman Khalil, the leaders of Harkatul Jihad Al-Islami, and the founder of Jaish-e-Mohammed, Maulana Masood Azhar. The association of this madrassa’s patron (Mufti Nizamuddin Shamzai) with the Afghan Taliban, especially Mullah Omar, is well known.

It might not have dawned on Mr Imran Khan but Jalaluddin Haqqani carries the title Haqqani for a reason — he had spent six years at Darul-Uloom Haqqaniah in Akora Khattak. Among the top 32 officials in Mullah Omar’s government, 11 — including six top ministers — were educated in madrassas in Pakistan. Out of these 11, seven were students at the Haqqaniah seminary. The US was nowhere in the picture when the alumni of these madrassas were on a killing spree in Pakistan and Afghanistan.

Mr Khan betters himself still when he claims, “After the WikiLeaks revelations yesterday, reports are being floated that the Inter-Services Intelligence (ISI) is aiding the Afghan militancy. The fact is that the ISI is not that powerful, but certainly in an environment of chaos and uncertainty Pakistan will need to protect its interests through all means necessary.” Even the ISI may take serious offence to this, as it is positioning itself as the power that can deliver the Taliban, especially the Haqqani network, provided the new set-up in Kabul is to its liking.

These assertions by Mr Khan might even be amusing if he was not capable of even worse assertions. Blaming the US for all ills is one thing, but he has as easily blamed the victims of terrorism. Writing about the Karsaz bombing in ‘Benazir Bhutto has only herself to blame’ (The Telegraph, UK, October 21, 2007), he noted, “I am sorry to say this, but the bombing of Benazir Bhutto’s cavalcade as she paraded through Karachi on Thursday night was a tragedy almost waiting to happen. You could argue it was inevitable...it is different for me campaigning in public, even in the frontier region, because I am not perceived as an American stooge, or a supporter of the war on terror.” Benazir and not the takfiris were to be blamed as per Mr Khan’s views!

The PTI and its leader are perhaps politically insignificant, but conceding space to such Ziaist propaganda has the potential to radicalise the nation, especially our youth. Fortunately, Mr Khan is not perceived as an American stooge — he is seen as a Taliban apologist.
No comments: Links to this post 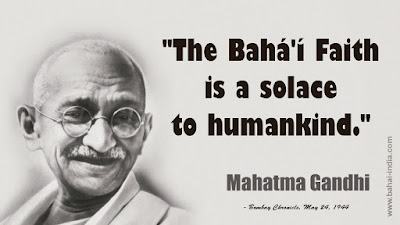 Pakistan is the latest country to be burnt by the scourge of Iran’s anti-Baha’i hatred in the ayatollahs’ global effort to eliminate the Baha’i Faith.
Last week, Pakistani Shia Cleric Allama Iqbal Bahishti told members of the press that Baha’is and Ahmadis were a danger to Pakistan. Journalist Ehsan Rehan said that Bahishti “urged the government to be watchful of the ‘heretic’ Baha’is and Ahmadis.” Bahishti is the provincial secretary-general of Majlis Wahdat-e-Muslimeen, Pakistan’s largest Shia organization. Rehan said that MWM “follows the Ayatollah, the supreme leader of Shias based in Iran.” As a post-Islamic religion, the Baha’i Faith is viewed as heretical by much of Iran’s Shia clergy. Baha’is have been persecuted and killed since the faith’s founding in 1844.
In order to galvanise anti-Baha’i hatred, Iran’s Shia clergy members have spread false accusations of Baha’is being agents of Western powers including the US, Israel, and the UK. These accusations have, and continue to lead to murders and mob attacks against Baha’is. As the United Nations has increased pressure on Iran to give Baha’is basic human rights, Iran’s government has sought to spread anti-Baha’i policies and propaganda to other countries.
Pakistan is the latest in a series of countries in which Iran’s influence has spread anti-Baha’i hatred.

Yemen’s Iran-backed Houthi party Ansar Allah has arrested Baha’is since it rose to power in 2014. One Yemeni Baha’i has even been sentenced to death.
In October, Houthi forces opened fire on a small group of Baha’is celebrating a religious holy day. A June report issued by the Baha’i International Community said that Rojeh Zayed, a member of Yemen’s Prosecution Office, as well as high-ranking members of the Political Security Office and National Security Office, were “repeatedly reported” have received instructions from Iran to persecute Baha’is.
Tajikistan
In 1999, a Tajiki Baha’i was shot in his home. According to a report by the US Department of State, militant Islamists aligned with Iran are considered “likely perpetrators.”

Pakistan - Hostage to the ‘faith mafia’

Leader of the Opposition in National Assembly Khursheed Shah said on Monday that prolonged Faizabad sit-in indicates that the government has lost its writ in the country.
Speaking to journalists, Shah said that it is regrettable to see that few people have sealed Islamabad causing distress to millions of people living in and commuting to the capital.
"As many as two million people live in Islamabad, people all over the world visit it,” he said, adding that, “If the government doesn’t want to take action against the protesters it should quit. The sit-in shows the government is weak and indicates the end of its writ.”
Responding to a question, he said that former prime minister Nawaz Sharif should follow the constitutional way which is to respect the decisions of the court.
He said that it was the Nawaz-led government, not the judiciary, which allowed former president General (retd) Pervez Musharraf to leave the country.
“Nawaz should ask about Musharraf from his then interior minister,” he said.
Shah said that in the country’s 70-year history, only the Pakistan Peoples Party (PPP) completed its five-year tenure.
“We want Pakistan Muslim League-Nawaz-government to complete its tenure,” he added.
The PPP leader said that Pakistan Tehreek-e-Insaf’s demand for early elections is ‘unnecessary’.
No comments: Links to this post 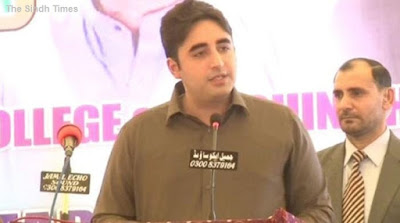 Pakistan Peoples’ Party (PPP), its members and supporters are observing the second death anniversary of senior politician and former president of the PPP Makhdoom Amin Fahim.
To commemorate the veteran politician’s services and life, special prayers have been arranged for the deceased in his native town Hala in Matiari, Sindh.
PPP Patron-in-Chief Bilawal Bhutto Zardari addressed the main ceremony being held in Hala.
Bilawal said that youth of Pakistan gets employment in every tenure of PPP.
He added that it is appreciatable to see Sindh government focusing on the health care of people.
“A trauma center will be built in the civil hospital(Karachi),” he added.
Bilawal said that PPP can never forget Makhdoom Amin Faheem.
Chief Minister Sindh Syed Murad Ali Shah and Faryal Talpur also addressed the ceremony before him.
Bilawal Bhutto Zardari also laid the foundation for the Makhdoom Muhammed Zaman Talab-ul-Maula Medical College and teaching hospital.
A documentary chronicling the life and services of the Makhdoom Amin Fahim was also screened at the event.
Makhdoom Amin Fahim was born in 1939 on the 4th of August in Hala, district Matiari, Amin Fahim contested elections 8 times between 1977 and 2013. During the first tenure of Late Benazir Bhutto Amin Fahim served as Federal Information Minister between 1988 and 1990.
http://www.thesindhtimes.com/sindh/bilawal-bhutto-zardari-pays-tribute-ppp-leader-makhdoom-amin-fahim/
1 comment: Links to this post