In light of the recent terrorist attack that killed 45 people in Pakistan, some find it hard to believe that energy scarcity might be the country's greatest security threat. Yet electricity shortages have directly fed the extremist cause while undermining the legitimacy of Prime Minister Nawaz Sharif's government, potentially more than any other factor.
Pakistan's national power grid has an "installed" capacity of over 20,000 megawatts (MW) but because of poor infrastructure and the government's inability to pay energy providers, shortages can run as high as 7,000MW during peak demand in the summer. Pakistan's high population growth rate, to make matters worse, is expected to push demand to 100,000MW by 2030.
According to Pakistan's Ministry of Water and Power, load-shedding, or rolling blackouts, have led to power outages that can reach 12 to 16 hours per day. During these periods up to 70 percent of the population lives on less than 300 units of electricity, enough to power a fan, two light bulbs and an electronic charger. Constant blackouts have sparked riots, a commonplace occurrence in Pakistan since 2008, that comprise of road blocks, strikes, attacks on utility offices and even the homes of politicians.
The root causes of the energy crisis can be found in Pakistan's fuel mix, which is skewed towards expensive, imported fuels and the government's policy to charge consumers less for electricity than it costs to produce.
Power companies rarely collect in full outstanding balances from customers, including the government, which means they can't pay their own bills, thereby creating a "circular debt" crisis. Cash-strapped power generators lack funds to procure the fuel needed to run plants at full capacity, leading to perpetual outages.
Environmental stressors like water scarcity have exacerbated Pakistan's energy shortfall. Pakistani officials predict that within 7 years the country will be water-starved, a foreboding prospect for a country that derives 30 percent of its energy from hydropower. The situation has grown so desperate that, at times, the government relies on monsoonal rains to increase inflow volumes and ease power shortages.
The severe black outs that ignite near term rioting only tell part of the story, however, because energy shortages have hurt economic productivity and cost Pakistan millions of jobs. In fact, the energy crisis shaves off up to 4 percent, or $9.2 billion, from Pakistan's GDP on an annual basis.
Electricity shortages have led to factory shutdowns, rising unemployment and increases in poverty levels. Dislocated workers in Pakistan have grown alienated over the past decade because of the government's failure to literally keep the lights on and businesses running.
Pakistan's energy crisis, one former economic advisor argued, has provided a "fertile breeding ground for extremism and insurgency against the state." Government failure to provide basic services like electricity and employment have allowed extremists to fill the void.
Disaffected young men are not only susceptible to ideology, they join insurgent movements because the militants can actually provide them with jobs. According to one survey, 75 percent of households in Pakistan said family members signed up with militant groups for the sake of employment.
Sharif, who came to power in 2013 on promises to resolve the energy crisis, has failed to implement fundamental policy shifts to effectively alleviate the problem. Predicted shortages this summer could provoke societal unrest that may pose an existential threat to Sharif's government, which is already in jeopardy of being overthrown by the military, according to Wilson Center scholar Michael Kugelman.
Sharif has turned to Beijing to save the day, although some claim his recent moves are more about political show and geopolitical designs than they are about filling the electricity gap.
China will reportedly invest $45 billion in Pakistan, a large bulk of which is dedicated to doubling the country's electricity output. This includes a 900MW solar power plant, two nuclear power plants that could add another 2,200MW to the national grid, in addition to a 720MW hydropower project targeted to go online by 2020.
But skeptics are fair to question the efficacy of these supposed solutions, considering that by 2022 Pakistan is expected to run out of water, a considerable amount of which is needed to operate hydropower as well as nuclear power plants.
To be sure, factors like U.S. drone strikes and Islamabad's history of grooming terrorist groups to achieve regional security objectives have played a major role in the spread of extremism within Pakistan. However, there is little doubt that unemployed youth, dislocated as the result of electricity shortages, provide insurgents with a deep vulnerable pool from which to recruit.
If Pakistan fails to address the energy sector's circular debt dilemma, irrational electricity tariffs, water scarcity and reliance on expensive fuel inputs, China alone will be unable to solve Pakistan's energy crisis or save Sharif from a restless population weary of being left in the dark.
No comments: Links to this post


PTI has failed to resolve KP's issues: Asif Ali... by dawn-news
No comments: Links to this post

A meeting of Pakistan Peoples Party’s (PPP’s) leaders was held in Peshawar to discuss the ongoing condition of the province today (Tuesday), Dunya News reported. 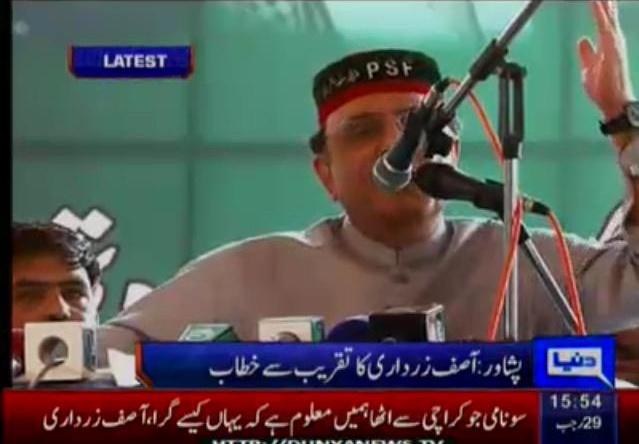 According to details, co-chairman of PPP Asif Ali Zardari also participated in the ceremony and stated that Pakistan Tehreek-e-Insaf (PTI) has failed to resolve the issues of Khyber Pakhtunkhwa (KP).
He said that PPP is ardently strengthening the ties with KP people.
Former president stated that we have not only served Federally Administered Tribal Areas (FATA) but have also aware the people of JP to stand for their rights.
No comments: Links to this post