Video - Throwback Thursday: That Time I Was On The Arsenio Hall Show | Gabriel Iglesias

Video Report - Still confused about how we got to impeachment?

The Kuala Lumpur summit, which is taking place in Malaysia, signposted a deepening divide in the Muslim world. The summit has highlighted curbs on some states’ ability to navigate freely among different blocs and alliances.
Pakistan’s limits in this regard are on full display this week. Pakistan’s prime minister, Imran Khan, has canceled his scheduled attendance at the Kuala Lumpur summit following his recent visit to Saudi Arabia. Reportedly, Riyadh is not happy with Malaysia’s attempt to build a platform that could potentially challenge the Organization of Islamic Cooperation (OIC), which is led by Saudi Arabia.
The summit has become controversial after Malaysia’s refusal to extend invites to Saudi Arabia and its close allies in the Gulf region. Reportedly, Iran, Turkey, Qatar, and Pakistan were the primary invitees to the summit, which includes more than 400 Muslim scholars from across the world.
Malaysia’s prime minister in consultation with other Muslim-majority states, particularly Pakistan and Turkey, decided to hold the summit to deliberate issues that the Muslim world faces globally. Khan not only offered his support for the initiative, but also announced that he would attend the event. For Islamabad, the summit in Malaysia offered an opportunity when it comes to discussing the Kashmir issue. The sentiment in Pakistan’s policymaking circles is that the OIC has done virtually nothing to call out India or offer support to Pakistan globally in this regard.
However, for Riyadh, the idea of Iran, Turkey, and Malaysia potentially building an alternative platform to the OIC directly challenges Saudi Arabia’s political and diplomatic outreach in the Muslim world. The success of such an initiative would mean that in the coming months and years, the OIC’s role may be further sidelined.
Arguably, the fact that Malaysia, Turkey, Iran, and Pakistan decided to hold a summit to discuss issues such as the ongoing situation in Jammu and Kashmir is a reflection of the OIC’s politicization and attachment to Saudi interests. The countries participating in the summit have been quite critical of India’s recent moves in Jammu and Kashmir. On the other hand, Saudi Arabia and its allies in the Gulf region have not sided with Pakistan mainly due to India’s growing economic clout. While Riyadh showed solidarity with Islamabad and expressed concern over New Delhi’s unilateral move in Kashmir, the UAE termed it India’s internal matter.
Pakistan, Turkey, Malaysia, and Iran have emerged as the evident opponents of India’s decision to revoke Article 370 of the Indian constitution. It’s important to note that the OIC, which is dominated by Saudi Arabia and states in the Gulf region, has gone soft on the Kashmir issue. In fact, Riyadh has made efforts to bring India into the OIC’s ambit. This has divided the forum and impacted its vision of addressing the issues of the Muslim world.
Over the last couple of years, the OIC has also condemned the Houthis’ role in Yemeni politics and declared the group a threat to regional peace and stability. This directly goes against Iran’s policy preferences regarding the ongoing war in Yemen.

It’s a strategic blunder that Pakistan has decided not to participate in the Kuala Lumpur summit and completely yielded to Saudi pressure. Riyadh’s anger over the initiative is such that Pakistan was forced to cancel even its ministerial-level representation. Pakistan’s decision shows that Riyadh still retains significant leverage over Pakistan’s foreign policy.
The costs for Pakistan are excessive. The fact that Pakistan is skipping the event shows that its foreign policy remains vulnerable to outside pressures. It also confirms that states like Iran, Turkey, and Malaysia, which favored Pakistan’s position on Kashmir, cannot expect Islamabad to protect its own interests. This directly puts to question Pakistan’s so-called ability to negotiate between Iran and Saudi Arabia. The development exposes existing debates concerning Islamabad’s intervention to negotiate a settlement between Riyadh and Tehran. Going forward, Pakistan’s ability to navigate its partnership between two major Islamic camps will remain severely constrained.
The forum and the surrounding controversy not only underscores the growing differences in the Muslim world but also offers insights into Pakistan’s foreign policy constraints. After this event, Pakistan’s decision-makers need to engage in serious introspection about the country’s future.
No comments: Links to this post 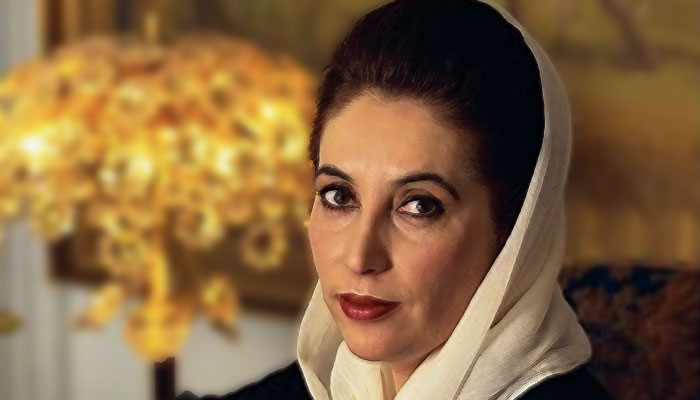 According to PPP Chairman Bilawal Bhutto’s spokesperson, the Liaquat Bagh administration denied written application to hold the jalsa on December 27.
Bilawal Bhutto’s spokesman said that the government is resorting to cheap tactics, and repressing any voice against it.
Khokar said that the rally will be held at Liaquat Bagh at any cost, adding that they will utilise every legal option to hold the jalsa.
Bilawal Bhutto earlier said the party will observe the death anniversary of Shaheed Benazir Bhutto at Liaquat Bagh Rawalpindi on Dec 27.
The Sindh government has announced a public holiday on December 27 (Friday) on account of the death anniversary of former prime minister Benazir Bhutto.
https://www.geo.tv/latest/263530-govt-denies-permission-to-hold-benazirs-death-anniversary-at-liaquat-bagh
No comments: Links to this post


Pakistan’s anti-corruption body arrested a prominent opposition leader on Monday who has been a vocal critic of the prime minister.
Ahsan Iqbal was arrested hours after he publicly described Prime Minister Imran Khan as the country’s “biggest beggar.” He said Khan has failed to improve Pakistan’s ailing economy despite getting billions of dollars in new loans from the IMF and other countries.
Ahsan Iqbal served as interior minister in the government of former Prime Minister Nawaz Sharif, who was himself removed from office in 2017 over corruption allegations, and sentenced to prison the following year.
Iqbal was arrested Monday after he appeared before the National Accountability Bureau. He was being questioned about alleged corruption in the construction of a sports stadium several years ago in his constituency in the eastern Punjab province.
Maryam Aurangzeb, a spokeswoman for Iqbal’s political party, called his arrest “political victimization” and said he was detained “because he refused to stop criticizing Imran Khan.” She said the party will continue to push for Khan’s resignation.
Iqbal’s arrest was yet another addition to the long list of politicians from opposition parties who have been arrested on corruption charges since Khan took office. He campaigned in last year’s election on promises to stamp out governmental corruption.
Khan’s predecessor, Sharif, got a seven-year prison sentence in 2018 for corruption and money laundering. However, his health has recently deteriorated, and he’s currently receiving medical treatment in London after being released on bail earlier this month.
In June, Khan’s government arrested former President Asif Ali Zardari in connection with a money laundering case. But a court freed him earlier this month on bail, also on medical grounds.
Sharif and Zardari are longtime political rivals but their parties have vowed to oust Khan’s government, citing increasing inflation and a spike in the price of essential foods.

Pakistan People’s Party (PPP) Chairman Bilawal Bhutto Zardari said that he is not afraid of being taken under arrest, he will speak more bravely if such an attempt is made against him, ARY News reported on Monday. 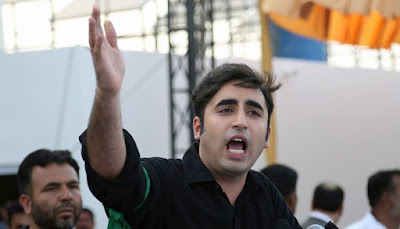 Addressing a news conference in Karachi, the PPP leader refused to appear before the National Accountability Bureau (NAB) Rawalpindi on December 24 (Tuesday), adding the notice served to him by the anti-corruption watchdog is “unconstitutional and illegal”.
“I am not afraid of being detained, but will speak more aggressively if an attempt made to arrest me,” Bilawal cautioned.
The PPP leader alleged that the National Accountability Bureau (NAB) was targeting opposition political leaders, adding that anti-corruption watchdog was defaming politicians through baseless allegations.
It must be noted that the NAB Rawalpindi has summoned the party chairman in a fake accounts probe for JV-Opal-225, a joint venture of Zardari Group Ltd.
The PPP chairman has been asked to appear before the NAB Rawalpindi office on December 24 (Tuesday) at 11:00 am.
According to sources, the Opal-225 (referred in tax record is a joint investment of Zardari Group Ltd) was initiated on October 15, 2011. In 2009, Bilawal Bhutto Zardari and his father became shareholders of the company.
Allegedly, billions of rupees were transferred to the company’s accounts via fake bank accounts. The company took out loans of billions of rupees from the banks.
Fake Bank Accounts Case
The anti-graft watchdog is conducting investigations in pursuance of the Supreme Court’s verdict in the fake accounts case wherein it forwarded the joint investigation team (JIT) report with directions to investigate and file references.Former president Asif Ali Zardari, chairman of the Pakistan People’s Party Bilawal Bhutto-Zardari, his aunt Faryal Talpur, former chief minister Qaim Ali Shah, provincial minister Anwar Siyal, others are among as many as 172 accused in the fake accounts case.The Islamabad High Court (IHC) had granted bail to the former president and Pakistan People’s Party (PPP) co-chairman Asif Ali Zardari on medical grounds.
A two-member special bench of the Islamabad High Court (IHC) comprising Chief Justice IHC, Justice Athar Minallah and Justice Aamir Farooq heard the bail plea of Asif Ali Zardari seeking his release on medical grounds.
The Islamabad High Court (IHC), in its December 17 judgment, had also approved the interim bail of Pakistan People’s Party (PPP) central leader Faryal Talpur in fake bank accounts case. https://arynews.tv/en/not-afraid-of-arrest-says-bilawal-bhutto/
No comments: Links to this post