Begum Nusrat Bhutto was an iron lady who stood against undemocratic forces in Pakistan. She was awarded the highest civilian award for democratic struggle against dictatorship. She faced the tyrannical rule of the dictator Zia-ul-Haq with utmost bravado.
Despite house arrests and other difficulties created for her by the government, she persisted in her struggle to raise the flag of democracy in Pakistan. Her courage was a source of inspiration for the Pakistan People’s Party (PPP) workers.
She led her people by example and gave them a clear message that there would be no compromise on the struggle for democracy even if it meant writing history with their blood.
After she lost her husband to dictatorship, Begum Nusrat Bhutto took charge of PPP as the chairperson and continued her struggle against martial law. The undemocratic forces were so terrified of this strong-willed lady that they tried to put out the spark burning for democracy by arrests and jails.
The attempts to crush the voices of democracy were thwarted as Begum Bhutto kept the party flag aloft. When she was assaulted with baton charge at Gaddafi Stadium in Lahore, a photograph of the wounded Begum Bhutto was published in all the newspapers, revealing the ugly face of dictatorship. The photograph has been imprinted in the memory of the nation and they are haunted by the image when their mother was treated savagely by the autocratic ruler.
When such tactics proved futile, the state resorted to emotional and mental torture by targeting Begum Bhutto’s children. Her daughter was put under house arrest and denied medical assistance. She was treated brutally in Sukkar jail and was kept away and separated from her mother. However, the resolve of the Bhutto ladies shook the dictator and added to his fear.
After the judicial murder of Shaheed Zulfiqar Bhutto, Begum Bhutto redoubled her political struggle for democracy. Proving his cowardice, General Zia-ul-Haq postponed the elections scheduled on 16 October, 1979. The voice of PPP,   Musawat newspaper was shut down.
Along with journalists, PPP workers were punished with lashes but the sky continued to witness their echoes of jiyaye Bhutto. If their leader was facing cruelties and yet marched on for democracy, the workers decided they would not let her down.
During this era of darkness, Begum Bhutto also faced separation from both her sons, Mir Murtaza Bhutto and Shahnawaz Bhutto. Despite all the difficulties, she dashed all hopes of Zia ul Haq to easily sail through in his boat of dictatorship.
Begum Bhutto was diagnosed with lung cancer during her long detention and the regime tried to seize the opportunity of taking revenge on its opponent by denying her aid. However, due to national and international pressure, she was allowed to go outside Pakistan for the sake of her health and treatment. On 22 November, 1982, Begum Bhutto reached Munich in Germany. Her health was very frail and she was accompanied by her sister as caretaker. Even though she was extremely ill, she addressed party workers who had gathered from different European countries.
“For the sake of democracy in our country, human rights, and restoration of the constitution, you must come forward and protest without fearing the martial law. It is the duty of the workers of Pakistan People’s Party and all the democratic citizens of Pakistan to give a final shove to the apparently strong but hollow pillars of martial law to bring them down on the ground,” she had said.
Benazir Bhutto proved true successor to her father Quaid-E-Awam Shaheed Zulfiqar Ali Bhutto as predicted by Begum Sahiba.
She led party to victory twice against all odds. Shaheed Mohtarma Benazir Bhutto became leader of international stature. Begum Nusrat Bhutto proudly stated about Benazir Bhutto, “She is an intelligent, courageous, and politically enlightened girl who will play an important role in taking PPP to new heights of success. Bhutto Shaheed has especially given political training to his daughter.
When Bhutto Shaheed was in jail, he was allowed one hour to meet with visitors. He used to give political lectures during this hour. This teaching during the last days of Bhutto Shaheed proved to be of immense importance for our daughter. “Benazir has passed every test and will offer effective leadership to the party,” he had stated.
Begum Nusrat Bhutto’s resolve was so strong that it travelled from one generation to another. Her children continued her struggle against dictatorship and today her grandchild Bilawal Bhutto is a champion of democracy. There is no doubt that the contributions of the Bhutto family for democracy in Pakistan are invaluable.
Begum Nusrat Bhutto was born on 23 March 1928 and she passed away on 23 October 2011.
https://www.pakistantoday.com.pk/2018/10/22/remembering-begum-nusrat-bhutto-mother-of-democracy/
No comments: Links to this post

PAKISTAN was warned the Indian army will enter the contested Jammu and Kashmir region if it does not stop the terrorist attacks emanating from the territory.

India has long accused the region of being a hotbed of terrorism and on Sunday, launched several attacks on terrorist launchpads in the region after reported fire by the neighbouring country.
Following those attacks, the governor of Jammu and Kashmir, Satya Pal Malik said on Monday that India would enter the country to go “inside and destroy” the terrorist camps if the attacks continued.
Speaking to reporters, Mr Malik said: “Pakistan will have to behave and stop these terror camps.
The Indian army confirmed “several terrorists” had been killed but also that “six to 10” Pakistani military members had also been killed during the recent attack.
India’s, army chief, General Bipin Rawat told The Times of India: “Six to 10 Pakistani soldiers have been killed in our firing.
“A similar number of terrorists have been killed and three out of the four launch pads were destroyed.
“The casualty number could be much higher.
“Instead of waiting for the terrorists to infiltrate, we decided to target the launch pads since we had the coordinates for them.”
India’s Prime Minister, Narendra Modi revoked Article 370 in August, a section within the Indian constitution which guarantees special status to Kashmir and Jammu, thus reinitiated the conflict between the two states.
The reason for his decision was down to alleged terrorist activity, in particular, an attack in the Kashmir region which killed 44 Indian paramilitaries.
Following that attack, the India Prime Minister called an airstrike on a camp run by the militant organisation known as Jaish-e-Mohammed.
However, two Indian jets were shot down in Pakistani territory with one including pilot, Abhinandan Varthaman, who as then paraded in front of state television before being returned to India.
During the United Nations General Assembly last month, Pakistan’s Prime Minister, Imran Khan indicated that the recent clashes had been the closest the two countries had come to a nuclear war.
He said: “It is the only time since the Cuban crisis that two nuclear-armed countries are coming face to face. we did come to face to face in February.”Following the trend of a potentially catastrophic nuclear war between the two states, a recent report published in Science Advances earlier this month stated that the death toll could rise to 125 million in the event of nuclear warfare.
The report stated: “India and Pakistan may be repeating the unfortunate example set by the United States and Russia during the ‘cold war’ era: that is, building destructive nuclear forces far out of proportion to their role in deterrence.
“Should a war between India and Pakistan ever occur, as assumed here, these countries alone could suffer 50 to 125 million fatalities, a regional catastrophe.” With Mr Khan warning of a potential nuclear conflict between the two, US President Donald Trump has previously remarked that he hoped the two could “come together”. In a move that did not pacify relations, however, Modi recently attended a rally in Texas with Trump. During the rally, Modi defended his country’s actions over Kashmir and labelled Trump as a “friend of India”. 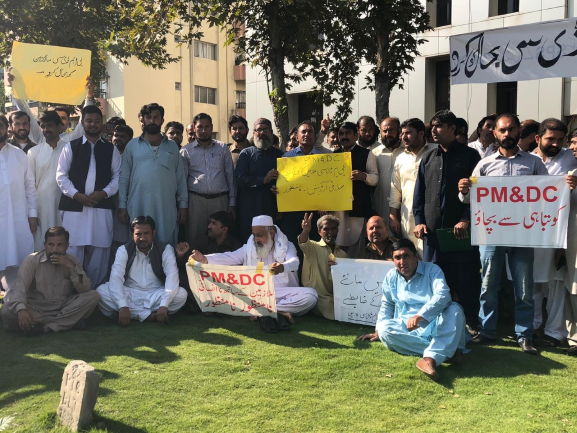