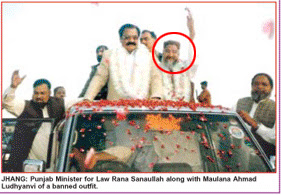 Punjab Law Minister Rana Sanaullah has conversed with MWM deputy secretary general Allama Syed Ahmed Iqbal Rizvi and threatened that if Majlis-e-Wahdat-e-Muslimeen leadership doesn’t stop protest campaign against him, they would have to face deleterious consequences for that.

After failure to talk to Allama Raja Nasir Abbas Jafari, Rana Sana made telephonic conversation with Allama Ahmed Iqbal. He argued that he had nothing to do with the enforced disappearance of MWM leader Syed Nasir Abbas Shirazi. He said that his opponents had done so to malign him (Rana Sana). He said that Khatam-e-Nubuwwat Movement leaders also had been targeting him.
He asked Allama Syed Ahmed Iqbal Rizvi to stop protest campaign against him. He also insisted that a meeting of him with Allama Raja Nasir Abbas Jafari should be arranged so that he could be able to clarify his position on the issue of kidnapping of Nasir Shirazi.
Allama Ahmed Iqbal responded to him that biased Punjab government had already imposed unjustifiable restrictions on Azadari (sacred mourning for Imam Hussain), naming the hosts of Azadari congregations in fourth schedule and registration of cases against them were enough proofs of the consequences and nothing else was left for Shia Muslims to face more than that in Punjab.
He said MWM leadership had confirmed reports that Nasir Shirazi was in illegal custody of the CTD that works under Punjab Government and also under Rana Sanaullah. He said that Punjab government would be held responsible for any harm caused to Nasir Shirazi. He warned that all Opposition parties would intensify protest movement against Punjab government and Rana Sanaullah if Nasir Shirazi is not released forthwith.
http://www.shiitenews.org/index.php/pakistan/item/31405-rana-sanaullah-threatens-mwm-leadership-of-dire-consequences
No comments:

Pakistan - A lesson to all men

Rafia Zakaria
SHAHZAD Saqib was a married man who wanted to marry again. Not bothering to get permission from his wife Ayesha Bibi, he proceeded to marry another woman. When she found out, she did what many more first wives in Pakistan should do — she took her case to court. In court, her lawyers argued that the Family Laws Ordinance requires that the man obtain permission from his first wife prior to marrying the second. Saqib, for his part, made the argument that since it was his right to marry four wives, he should not have to obtain permission from anyone at all.
He was wrong. As the verdict showed, the Family Laws Ordinance requires that any man seeking permission to marry a second time must submit a written application to the chairman of the Arbitration Council. If no chairman has been appointed, the application, it has been pointed out, can be submitted to the council. If such an application is not submitted then the ordinance imposes fines and even imprisonment for men who do not follow the letter of the law.
The documented effects of polygamy on women and children call for intervention by judicial institutions.
Few judges in Pakistan have enforced the provision. Some are amenable to the premise that since the permission to marry four women has been granted in Islam, all the conditions attached to the union which are also established by religion, can be ignored. The matter came up in a Supreme Court decision sometime ago. The judges in that case correctly pointed to the fact that the permission for polygamy is not a blanket grant but rather qualified by the idea of doing justice between all wives.
Under the provisions of the ordinance, the failure to obtain permission from the wife and the Arbitration Council can be brought to a court’s attention by the ‘aggrieved party’. In simple terms, under the ordinance any woman who knows that such permission either from her or the chairman of the Arbitration Council was not obtained can take the man to court. In the second case discussed here, a sentence of one month’s imprisonment was imposed on the man who had flouted the law. In the case of Shahzad Saqib, a jail term of six months has been imposed. The law permits judges to impose a prison sentence of up to one year.
The imposition of these sentences marks a commendable move forward in the effort to make family laws more equitable for Pakistani women and sets a good example for other Muslim countries to emulate. As organisations such as Sisters in Islam from Malaysia have been pointing out for many years, there is no blanket permission for polygamy in Islam or in the Holy Quran.
Furthermore, the deleterious effects of polygamy on women and children documented by this organisation call for intervention by judicial institutions whose very purpose is to maintain equity among different members of society and to protect institutions such as the family. The evidence collected by the group reveals that both women and children living in polygamous households experience high amounts of emotional stress and upheaval leading to depression and other illnesses. Most of the children reported neglect from the father once he acquired a second wife.
More recent research published in the Journal of Family Studies in 2015 found that children in polygamous families suffer more mental health issues than those in monogamous families. Specifically, children and adolescents in non-monogamous families are said to exhibit poor adjustment, aggressive and anti-social behaviour, communication disorders and poor self-concept.
Some may have a predilection for drug abuse and alcoholism. Unsurprisingly, children from such families have lower levels of academic achievement than those from families with one father and one mother. Incidents of family violence, marital discord and ultimately divorce are also more likely in polygamous homes, leaving everyone involved subject to high levels of stress and insecurity.
All these findings have a bearing on the issue of polygamy because increasingly and regularly marrying multiple women is presented by the men involved as an altruistic act aimed at helping women who otherwise do not have a male protector, or children who may not have a living father.
Going by the findings mentioned, it appears that polygamy creates far more problems than it solves, leaving both the women and children involved in far worse shape than if they were fending for themselves. The problem in these cases is not the destitution faced by women, but rather a society that imagines having a male protector as the only way women can obtain safety and security in a society.
For all these reasons, the judicial enforcement of the imprisonment provisions of the Family Law Ordinance must be saluted and welcomed. Unless existing laws that underscore the requirement of punishment when permission is not obtained are enforced, the myths that polygamy is an unqualified right, that all men are judges who can issue unilateral decrees upon their wives, and that everyone benefits from polygamy, will never be displaced in the minds of the ignorant and self-absorbed. Legislation, enacted as it is by elected representatives, is the first step towards ensuring that Pakistani women are treated as the equals that they are under Pakistani law; actual enforcement of legislation is the second and equally crucial step.
The case of Shahzad Saqib, who set out to marry again without obtaining permission from his first wife and without following the correct legal procedures, should be a cautionary tale for all men. What conscience seems to have been unable to stop, perhaps the fear of prison will.
No comments: 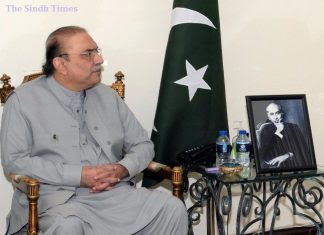 Pakistan Peoples Party Co-Chairperson Asif Ali Zardari rejected on Wednesday political opponent Nawaz Sharif’s statement on country’s judiciary and alleged that Nawaz’s has himself unveiled his anti-democratic agenda.
He further said that contacting Pakistan Muslim League-Nawaz president in such conditions would mean betraying the country. Zardari was speaking to media after chairing a meeting of PPP in Islamabad.
Nawaz claimed that the verdict was the anger and grudges of the judges, he said. “After attacking the judges, he presented his unknown agenda in front of everyone.” Nawaz is pursuing the agenda of certain international powers, he claimed.
PPP will never let Nawaz succeed in his plans, said the former president.
“Nation knows that everyone knows everything about me. I will never become a part of any conspiracy against the democracy.”
“An attack on judges is an attack on Constitution, and an attack on Constitution is an attack on democracy,” he remarked. Nawaz considers himself above to be law and accountability, he added.
Nawaz even tried to make Pakistan Army his slave but he proved to be unsuccessful, Zardari alleged, adding that Nawaz even tried to blackmail the judges. “After Nawaz failed, he initiated personal attacks against the judges.”
“Nawaz is playing a double game with the nation,” he alleged, adding sometimes he gives statements against Shehbaz, other times he shows that they are united.
Including Pakistan Tehreek-e-Insaf Chairperson Imran Khan in his attack, Zardari remarked: “One doesn’t accept his warrants of arrest, while another doesn’t acceptcourt’s verdict against him.
“Still both the leaders give lectures on law and Constitution to the people,” he added.
http://www.thesindhtimes.com/pak/nawaz-unveiled-anti-democratic-agenda-asif-ali-zardari/
No comments: 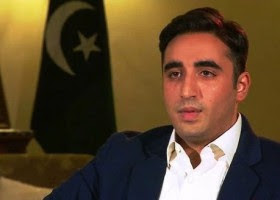