Daily Times:
The targeting of both the Awami National Party (ANP) and young Pashtun leaders continues. This week saw the assassination of Ibrar Khalil. He was gunned down along with his nephew. Khalil was the party candidate for the Peshawar PK-74 by-poll scheduled for next month.<br />
<br />
Thus far, no group has claimed responsibility for the twin-murders. Though in the run-up to the July elections, militants engaged in a murderous campaign against the ANP. Indeed, senior party leader Haroon Bilour was killed in a suicide blast that left 21 dead just two weeks before voting. His father, Bashir Ahmed Bilour, met the same fate some six years earlier. The Tehreek-e-Taliban Pakistan (TTP) owned both attacks. In fact, the ANP lost hundreds of party workers and supporters ahead of the 2013 polls as the TTP targeted its rallies as well as those of the PPP and MQM. The militants waged a bloody war of retribution against those insufficiently insubordinate to go ahead and participate in what the group denounced as western-style democracy. Which is, of course, is another way of terming the system of parliamentary representation ‘un-Islamic’.<br />
<br />
It now falls to the PTI government in Khyber Pakhtunkhwa to beef up security ahead of the October 14 by-election. It must similarly spearhead the necessary calls for justice. Just as it did in the Mashal Khan murder case. And when it came to standing with the Pashtun Tahafuz Movement (PTM) as the latter protested the ongoing killing of their community at the hands of militants and law enforcement agents alike. The provincial set-up should therefore as a matter of urgency consult the ANP as well as others parties and the military establishment to provide a security roadmap for next month’s polls and beyond. Tackling the home-grown militant threat must also top the agenda.<br />
<br />
This is no time for political point-scoring.
No comments: Links to this post 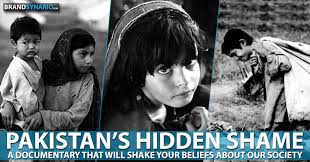 A recently launched report by the NGO Sahil reveals that a shocking number of 2,322 child abuse cases were reported in the first six months of 2018 with more than 12 children abused per day, during the same period. The report further depicts a 32% increase in child abuse in the first six months of 2018 as compared to the reported 1,764 cases in the first half of 2017.
These figures don’t represent the true scale of the problem. Only the tip of the iceberg is being reported, and unreported cases are exponentially higher. There is no way to track all the unreported cases as the subject is shrouded in the silence of stigma. The taboo nature allows perpetrators to continue abuse with impunity, without fear of legal repercussions.
Sexual violence against women and children is endemic around the world. It is estimated that one in three women globally have experienced physical or sexual violence in their lifetime. The 2018 “End of Childhood Index” ranks Pakistan at 149 out of 174 countries, the major cause being discrimination against girls. Street children are the most vulnerable in this regard. Evidences from various reports show that up to 90% of street children in the country are victims of sexual assault. They are exposed to violence and abuse on a daily basis and young girls are often forced into prostitution. This coupled with disease and substance abuse, forces them towards a life of crime. A documentary titled ‘Pakistan’s Hidden Shame’ reveals the sad reality of sexual abuse faced by homeless boys in the Northern Areas of Pakistan. It alleges that nine out of 10 street children in Peshawar have been victims of paedophilia. These children warrant special attention from the government, development agencies and civil society.
Furthermore, child marriage makes a significant contribution to girls’ abuse, exacerbating the already-dismal situation of child rights in Pakistan. The limited data available on the subject show that around 30% of the marriages in Pakistan fall under the child marriage category, with the highest occurrence in Sindh. Under the Child Marriage Restraint Act of 1929, the minimum age for marriage is 18 years for boys and 16 years for girls. This inherent discrimination against young girls must be immediately removed and the punishment for anyone contracting such a marriage should be made more severe.
Legislation related to child sexual abuse remains poorly implemented and there is a lack of adequate measures to protect victims. The authorities’ ineptitude and failure to take proper action coupled with lengthy judicial process makes acquiring justice next to impossible. Additionally, victims have little to no legal representation.
There must be effective monitoring and accountability of law- enforcement agencies and setting up of preventive mechanisms for child protection at the district level. There is little or no emphasis on victim support. Often victims of such abuse are not even taken for a medical exam unless they are in a severe life-threatening state. It is also important to bear in mind that in most cases, the abuser is a person of trust, known to the victim and his/her family. Moreover, we must believe our children when they report such abuse, instead of quieting them up due to misconstrued notions of honour or resorting to victim shaming.
Furthermore, Urdu does not have any words for terms like abuse or paedophilia which makes reporting of these crimes even harder. It is imperative that we bring this subject into the mainstream. Surveys should be adequately funded in order to ascertain the true scale of the problem.
Pakistan currently has the largest percentage of young people in its history. The effects of such abuse are deep and completely life altering. We cannot turn a blind eye to the deprivations and hardships affecting our poor and vulnerable children. We must ensure that our children have a proper childhood by bolstering our ability to protect them. Prime Minister Imran Khan’s mention of child abuse in his opening address gives us hope in this regard. We must fight this menace as a society to make sure no more children fall prey to such abuse. The heavy burden of small coffins must end.


If there is anything this war proved, it is that nothing can be achieved through war. Certainly, no war leads to permanent or lasting peace.
Both India and Pakistan are now engaging in their mutual juvenility of celebrating their “victory” in the 1965 war.
The very fact that even 50 years after the war, both sides can continue claiming victory underlines the reality that this war was a stalemate, a dull draw, though it cost a lot in lives and national resources.
If there is anything this war proved, it is that nothing can be achieved through war. Certainly, no war leads to permanent or lasting peace. Even if one side wins, the other nurses its wounds and strikes back at what it sees to be the right time. In 1967, in the Six Day War, Israel achieved total victory over the Arabs. It also captured vast territories on the West Bank, Golan Heights and the Sinai Desert.
But within six years, in what is known as the Yom Kippur War, the Arabs were back at its throat, this time better regrouped, war-gamed and equipped. The result this time was also different. Israel survived, but barely. There were days when it looked like the small nation would be run over, and it’s been widely debated by historians that it thought about using its undeclared nuclear weapons, in desperation.
It was the Camp David Peace Accords, reached later, that produced lasting peace between Israel and Egypt, its most powerful Arab neighbour.
In the Subcontinent, we have fought three major wars (1947-48, 1965 and 1971) and yet our basic issues remain unresolved, and both countries live in distrust and fear of each other.
The inconclusive war of 1965 showed both sides the inadequacy of their military power in taking the issue to a conclusion even when it had the advantage. This applies to Pakistan in Chhamb-Jaurian so early on in the war, then in Khem Karan, and to India in the Lahore and Sialkot sectors, where initial surprise and local superiority did not translate into decisive gains.
Both sides, instead of accepting the reality that their economies would never support an armament build-up that could do any more than defend their borders adequately, started building up for the next, more “decisive” war.
As a result, India turned to the Soviet Union, which replaced Britain and France as our main weapons supplier. Disillusioned with America, Pakistan walked firmly into the Chinese camp.
The unfinished business of 1965 led to the Bangladesh War of 1971. Sure enough, it was decisive and there is no debate as to who won. It did tilt the strategic balance in the Subcontinent and gave us more than four decades without a major war. But it hasn’t given us permanent peace. Pakistan and India continue to be hostile to each other. The bulk of our forces are still arrayed and war-gamed to fight what remains of Pakistan.
At the same time, low intensity conflict of some sort or the other has now carried on, we can say, from 1982, since Pakistan started dabbling in our Punjab situation, and then in Kashmir.
The golden jubilee of the 1965 war, therefore, should be a moment of reflection rather than celebration and mythologising. In their heart of hearts, both sides know that this was a War of Mutual Incompetence. Neither achieved anything. A fortnight into the war, both were tired in body and mind, short of ammunition or tactical ideas. This has been documented on both sides by honourable soldiers who fought each other. They are enormously more honest and certainly better informed than rival propagandists on both sides now building Goebbelsian mythologies.
Wiser nations will move on. Pay homage to those who fought and sacrificed. Draw military-diplomatic-academic lessons from studying that war like any other. But don’t delude yourselves into fighting it all over again, in your twisted heads, and arriving at a conclusion that you wish it did. Because it ended 50 years ago, and it ended without any conclusion, except that wars do not solve anything.
https://theprint.in/opinion/have-you-noticed-how-baba-ramdev-went-silent-on-section-377/112824/
No comments: Links to this post