OVER 1500 CASES OF ENFORCED DISAPPEARANCE REMAIN OPEN IN PAKISTAN: US

The US State Department in its annual country report noted that the Commission of Inquiry on Enforced Disappearances received 4,608 missing person cases in Pakistan and claimed to have closed 3,076 of those cases, while 1,532 remain open.
Data from the commission showed the number of persons reported missing was highest in KP (751 missing), followed by Punjab (245 missing), Balochistan (98 missing), Sindh (50 missing), Fata (48 missing), the Islamabad Capital Territory (45 missing), Azad Jammu and Kashmir (AJK) (14 missing), and Gilgit-Baltistan (five missing).
The State Department report also highlights the issue of forced disappearances in Pakistan, noting that in 2017, “there were kidnappings and forced disappearances of persons from various backgrounds in nearly all areas of the country. Some police and security forces reportedly held prisoners incommunicado and refused to disclose their location”.
The report also alleges that dozens of political workers and activists were kidnapped, tortured and killed in all these places.
The most significant human rights issues identified in the report include extrajudicial and targeted killings, disappearances, torture, lack of rule of law and frequent mob violence and vigilante justice with limited accountability.
Additional problems identified in the report are arbitrary detention, lengthy pre-trial detention, a lack of judicial independence in the lower courts, governmental infringement on citizens’ privacy rights, harassment of journalists, and high-profile attacks against journalists and media organisations.
Government restrictions on freedom of assembly, freedom of movement and freedom of religion and discrimination against religious minorities, and sectarian violence have also continued.

At least a dozen organisers of the Pashtun Tahafuz Movement (PTM) rally in Lahore on late Saturday were allegedly picked up by security officials ahead of the rally scheduled to be held at Mochi Gate on Sunday.
According to initial reports, Awami Workers Party (AWP) leaders Ismat Shahjahan and Fanoos Gujjar, PTM leader Ali Wazir, Muzzamil Khan, Alamgir Mehsud and Imran Mandokhel were among the people reportedly detained by the authorities.
In a video making rounds on social media, police officials can be seen arguing with them before they were whisked away. However, the whereabouts of the missing activists remains unknown.
When Pakistan Today contacted Civil Lines SP Operations Safdar Kazmi, whose jurisdiction Davis Road comes in—he categorically denied the police’s involvement in the incident and said police is in no way responsible for the incident.
The development comes in the wake of the police’s directives to the protesters that they would provide security to the rally, but they notification barring the PTM from holding the rally won’t be revoked.

“The rally tomorrow at 4 pm will go as planned. You all are requested to reach the spot as planned. You might have found out that currently, there is an on going series of arrests of the PTM leaders in Lahore. Ali Wazir, Bilal Mandokhel, Muzammil, a senior lady Ismat Shahjehan, Shehbaz and other comrades have been arrested. Then, at the Punjab University, students Alamgir Wazir, Adnan Mehsud, Noorul Hameed and others have been arrested, in addition to several others. This spate of arrests continues, as I speak to you,” said the leader of the movement, Manzoor Pashteen while reacting to the arrests.
“You had arrested Ali Wazir even when the corpses of his father and brothers were lying in his house. They had given up their lives for the homeland, yet you arrested him; he is used to this behaviour. You have shown the path you are on and the path we are on. Spreading terror is your tactic; spreading the word of peace from city to city is ours,” he said.
Pashteen denounced the protests, saying, “It is not just here that you have harassed us. And then, with your propaganda and cunning you have hidden your actions. And have done whatever it took to make yourself seem justified.”
“I request all of you to record your protests in all the cities of Pakistan tomorrow (Sunday) for the sake of the constitution of our country. In particular, Khyber Pakhtunkhwa, in a peaceful manner; don’t let that go. Don’t say anything to anyone, even if someone harasses you or hits you; that is their nature, that is what he has done all his life.”
“But we will not stay quite. We are tribals. We didn’t even know how to stage rallies. We didn’t know how to ask for rights. We had other methods but we will not resort to those,” he warned.
Earlier in the day, a notification was issued by the government that barred the PTM from holding the rally at Mochi Gate. However, later in the day, the district admin agreed to provide security to the gathering, however, it refused to retract the notification, Pakistan Today had learnt.
“We will gather at Mochi Gate no matter what, and will not allow such meddling to come in the way of our movement,” said Ismat Shahjahan, the organiser of the rally, speaking to Pakistan Today.
Earlier, the district administration of Lahore had rejected the PTM’s plans to hold the public gathering in Lahore late on Friday night. The rally had been announced in a Peshawar meeting of the movement on April 8.
“The civil government had verbally communicated their assent to us multiple times and had said that the No Objection Certificate (NOC) was as good as issued, but now they have come up with security concerns a day before our rally!” Shahjahan went on to say.
“This is a movement which has been speaking the truth from day one. There has not been a single untoward incident in any of our gatherings, then why is the Lahore administration so averse to granting us permission?” she questioned.
Meanwhile, officials from the Deputy Commissioner (DC) office told Pakistan Today that the decision to not grant the NOC to the organisers of the rally was taken after they received word of an increased threat level in the city.
“The NOC was not granted after a detailed intelligence meeting of the administration. We had received word that there was a threat level and it was deemed prudent to not allow any such gathering that may cause disruptions or be a target,” said Amir Shafiq from the DC office.
“They have also not suggested an alternative venue,” he added.
When contacted, the DC office did not comment on the change of heart.

The administration has refused to grant permission to Pashtun Tahaffuz Movement for its public gathering at Lahore’s Mochi Gate on Sunday.
The PTM’s request for holding a rally in Lahore on April 22 was rejected due to “prevailing security circumstances”, according to a letter obtained by SAMAA.
Ali Wazir, a member of PTM, in a statement appealed the people of Lahore to gather at Mochi Gate to learn about the ordeal Pashtuns were going through in war-hit areas.
“We want to give details that don’t reach you due to media censorship,” the PTM member said.
Various civil rights groups, including Lahore Left Front, Joint Action Committee and Women Action Forum, have announced support for PTM’s event.
“We have informed the police that come what may we will hold Jalsa at Mochi Gate,” a member of Left Front told SAMAA.
He said the PTM has twice requested Lahore administration for permission but they denied.
“We have told them that we won’t accept their undemocratic ban which is a violation of right of association.”
“Are only religious group allowed to organize Jalsas?” he questioned, referring to a recent 12-day sit-in by Tehreek-e-Labbaik. 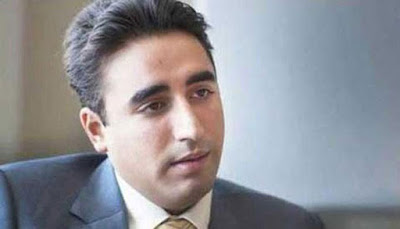 Chairman Pakistan Peoples Party Bilawal Bhutto Zardari has paid rich tributes to the great poet Allama Iqbal on his 80th death anniversary being observed today.
In his message, the PPP Chairman said the poetry of Allama Iqbal was an everlasting asset for not only the sub-continent but for the whole world as well. His poetic message always promoted human fraternity and love and lit the lamp of hope among the Muslims of South Asia, he added.Bilawal Bhutto Zardari said that his poetry can effectively be used against extremist religious and militancy tendencies and for the interpretations of spiritual and religious thoughts.
PPP Chairman said that onslaught of extremism can only be challenged through incorporating message of Allama Iqbal in religious education, who floated the concept of Pakistan. He remained an icon who tried to create awareness, sense of responsibility among Muslims for his entire life and infused new life in the independence movement, the PPP Chairman stated.