The Fata reforms package, which has been under consideration since the PML-N government came into power, could have been the signature achievement of the ruling party. Instead it is increasingly looking like the package may never even be implemented. Part of the Fata reforms bill, including extending the writ of the Supreme Court and the Peshawar High Court to the tribal areas, was on the agenda for the National Assembly session on Monday. A last-minute decision to remove it led to a walk-out from the opposition parties and brought a premature end to the day’s proceedings. The next day, too, the opposition parties walked out and said they would boycott the session over any further delays to the bill. On Tuesday, the Jamaat-e-Islami took out a long march in favour of the reforms. As it reached Islamabad, others like the PPP’s Khursheed Ahmed Shah joined it. There is a broad consensus that the cruel Frontier Crimes Regulation needs to be repealed and Fata merged with Khyber Pakhtunkhwa so that it is brought under the protection of the constitution. Although the government has claimed that the delay in the bill is due to some technical errors, it has been unable to explain what those errors are. For many political analysts, the reforms are being withheld to keep the JUI-F happy since the party, along with the Pakhtunkhwa Milli Awami Party, is the only one that has opposed the Fata reforms bill. Its reasons for doing so are purely parochial. The JUI-F does not have a support base in Fata so making the tribal areas part of Khyber Pakhtunkhwa could dilute the party’s support in the province.
One would think that, on its own, the JUI-F shouldn’t have the power to bend the PML-N its way. But the ruling party is also in a bit of a dilemma – and needs to stop bleeding support. Five of its own members have announced their resignations from the National Assembly and Punjab Assembly. Attempts to reach out to the PPP have been rebuffed. The JUI-F is one of the only parties left in the PML-N camp. That, though, should not be enough to cause the death of the Fata reforms bill. The bill itself is imperfect since it delays the merger of Fata and Khyber Pakhtunkhwa for five years and replaces the FCR with a similar law for an interim period. Even passing the reforms bill will only be the start of a long process that requires the Council of Common Interests to decide how much of the divisible pool should be allocated to Fata. But taking that first step is essential. The opposition parties have now formed a committee to discuss Fata reforms with the government and devise a solution. The government should work with the committee to ensure the passage of the reforms. The PML-N government had claimed to be committed to the people of Fata and their rights. It is time to make good on that promise.
No comments: Links to this post

By Babar Ayaz
‘SORRY’ is a five-letter word seldom used in Pakistani society. The ability to acknowledge and apologise for having made a mistake is an unpopular virtue, particularly among those in power. Let’s examine a few glaring examples where the mistakes of powerful groups and institutions have cost the nation great losses.
The most recent example is the six-point agreement between the government (or, rather, the establishment) and the participants of the Faizabad sit-in. Nowhere in the agreement is there any regret that millions of the twin cities’ citizens suffered because of the sit-in. There were also reports that at least two people died because they could not reach hospitals in time. The TLYR leadership may claim that protesting for a holy cause justifies the sacrifices made by citizens. One could accept this argument had the long-suffering citizenry voluntarily chosen to make such sacrifices, rather than under the duress of TLYR danda brigades.
Similarly, no matter how unreasonable the protesters’ demands, the government too did not show any remorse for the people’s suffering by delaying their eventual acceptance of the demands. Nor do they seem to have considered the long-term ramifications of the agreement they signed. Prodded by the establishment, the government’s agreement has set a terrible precedent.
Let’s take another example, where in the Nawaz Sharif disqualification case the honourable court used the dictionary meaning of the word ‘receivable’ instead of the legal definition given in tax laws. When Sharif’s lawyers filed a review petition it was heard by the same judges, which is customary, although it shouldn’t be. The review petition should be heard by another bench because we cannot expect the judges, who are also human beings, to rise above themselves and admit to being wrong in their initial judgement.
We can’t progress until we accept our mistakes.
Falling prey to populism during the tumultuous tenure of chief justice Iftikhar Chaudhry, the judiciary gave three decisions in commercial cases (Reko Diq, Pakistan Steel Mills and Karkey Karadeniz) that were lauded by the immature media and politicians alike, but at the end of the day are going to cost the nation billions of dollars. But is there any tradition among the honourable members of the judiciary to admit that they may have made a mistake?
Now let’s return to political and military decisions, for which the leadership owes an apology for incorrect decisions. Take the decision by the government under Jinnah declaring that Urdu alone would be the national language, which the people of East Pakistan found unacceptable, protested against and even died for. Eventually, the government had to agree to give Bengali national language status. Nobody said sorry, or admitted that the initial decision was wrong.
Nobody apologised for the creation of One Unit, depriving East Bengal of its position as the largest province. Nobody said sorry for abrogating the 1956 constitution, which was created seven years after the nation was founded. Nobody ever apologised for the grand mistake of imposing martial law in 1958, which stunted the democratic process and further alienated the people of East Pakistan.
Nobody ever accepted the blunder of launching a covert operation in Kashmir in 1965 that resulted in full-fledged war between India and Pakistan. With our war resources exhausted, Pakistan had to accept the ceasefire after 17 days since, had the war continued for longer, we could have been badly defeated.
Nobody had the moral courage to apologise to the people of Bangladesh for exploiting them like a colony and then launching a military operation against them. Nobody in the establishment has the grace to accept that getting involved in the Soviet-Afghan war during Gen Zia’s regime was our greatest blunder. For the last three decades, Pakistan and Afghanistan are bleeding because of Zia’s military adventure. Arms proliferation and the introduction of violence in politics are the ramifications of Zia’s jihad adventure.
Nobody apologised for launching the Kargil adventure, where many of our soldiers were martyred while fighting ostensibly as Kashmiri mujahids. When we started losing the Kargil battle we had to rush to Uncle Sam to ask India to commit to a ceasefire.
I have not even listed here the many adventures of non-state actors, allegedly backed by our establishment, who sabotage the peace process with India. The trouble is, because we don’t say sorry and accepts our mistakes, we have not been able to correct ourselves and instead claim that we are the victims of an international conspiracy against us. Our establishment and the majority of the media are suffering from self-righteousness. May God help us! 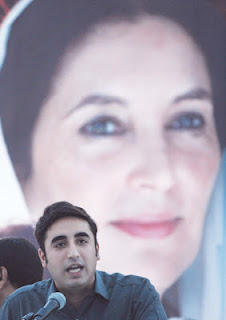 Pakistan People’s Party Chairperson Bilawal Bhutto Zardari strongly condemned the government’s move of withdrawing the Federally-Administered Tribal Areas Reforms Bill at the eleventh hour from the National Assembly Agenda on Monday.
In a statement, the PPP chairman said that the decision of the Pakistan Muslim League-Nawaz (PML-N) to withdraw the bill smells of its “hatred” towards the people of the Fata.
He pledged that his party would merge the Fata into the Khyber-Pakhtunkhwa as per the aspiration of the people of the tribal areas.
Bilawal pointed out that in August 2011, President Asif Ali Zardari amended the Frontier Crime Regulation (FCR), a British-era law curtailing the Fata residents’ rights, and extended the Political Parties Act 2002 to the tribal areas.
The PPP chief further said that party had already vowed to integrate the Fata into the Khyber-Pakhtunkhwa, the extension of high court’s jurisdiction and to end the FCR.
http://nation.com.pk/12-Dec-2017/bilawal-flays-govt-for-withdrawing-reforms-bill 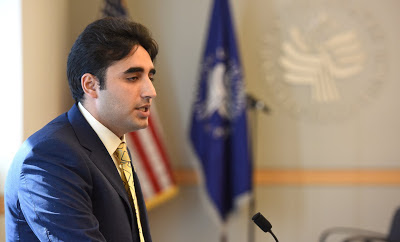 Pakistan People’s Party Chairman Bilawal Bhutto Zardari has taken serious notice of mishandling a protest of growers outside the Bilawal House in Karachi the other day and said that the use of violence should be averted while dealing with political protests. In a statement, the PPP chairman pointed out that it was a sheer negligence of the Pakistan Muslim League-Nawaz (PML-N) government for not tackling the issue of piling up surplus sugar stock in country go-downs, which had eventually generated uncertainty and unrest among sugarcane growers.

He said that the Sindh government should take the farmer community along with their mainstream representative organisations into confidence over the issues cropping up due to inaction on the part of federal government.
“Agriculture economy was booming when the PPP was in power but it was undo by the PML-N government since it assumed office in 2013,” said Bilawal. He also asked the Sindh government to keep a vigilant eye on political opponents impersonating as growers to exploit the situation for their political mileage.