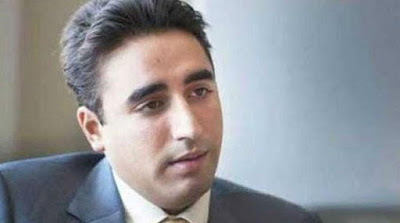 People of south Punjab will get freedom from Takht-e-Raiwind after the upcoming general election, said Pakistan Peoples Party chairperson Bilawal Bhutto Zardari on Sunday.
“South Punjab’s days of misery are over now,” he said, adding,”south Punjab is moving towards dawn of progress, happiness and equality.”
The PPP chairperson remarked this while speaking to the expected candidates of the districts of Multan, Bahawalpur divisions among others at Bilawal House, Lahore.
The current development budget for south Punjab is less than satisfactory, he remarked, adding that PPP has devised projects to provide relief to the poor people in the country.
Moreover, he also alleged that the rulers have spent billions on media campaigns for fake and false development projects.
He also remarked that murderers of PPP workers are roaming freely in Haroonabad. “PML-N [Pakistan Muslim League-Nawaz] government is not willing to arrest the murderers of PPP workers.”
After the meeting, the PPP chairperson also met the children of the worker Imtiaz Haider, who was killed in an attack on PPP leader Shaukat Basra in Haroonabad.
No comments: Links to this post

Pakistan - This time PPP is being targeted

Sindh Information advisor Mola Bakhsh Chandio on Sunday said that the policy of ‘picking people up’ is not appropriate, adding that at first ‘one party’ was targeted and now it seems to be the Pakistan Peoples Party’s turn.
The provincial minister was addressing media in a press conference, where he made the statements in reference to the recent arrest of three close aides of former president Asif Ali Zardari.
He said that Interior Minister Chaudhry Nisar was making threats since some time now he has acted upon it.
“We will not accept this kind of revenge,” said Chandio, adding that such kind of acts promote anarchy.
He also said that currently in Sindh, the duration of loadshedding is 18 hours and the situation of water supply is also dire.
“Mian Sahab (PM Nawaz Sharif) do not give life for Pakistan, instead spare its life,” he said.
Earlier, Opposition Leader in the National Assembly Syed Khursheed Shah demanded that the three close aides of former president Zardari, who were reportedly picked up earlier, be presented in the courts within the next 24 hours.
"If you want to arrest people for being Zardari’s friends, then you should arrest me too, I can also tell you a lot," he said while talking to media at his residence in the Ministers’ Enclave.
He said the ‘arrested’ people included Zardari’s manager Ghulam Qadir Marri and Nawab Leghari.
'Group of thieves’ ruling PPP, says Talal Chaudhry
Pakistan Muslim League-Nawaz (PML-N) MNA Talal Chaudhry lambasted PPP leaders for their reactionary statements, saying that a group of thieves is ruling the PPP.
Speaking to Geo News, he alleged that the PPP of today came to power after selling the name of Bhutto. “They have not only snatched away the things which Bhutto promised to the people of Sindh but also turned the city of light into a garbage den,” he said. “Nowadays fake Bhuttos are ruling the party.”
Raising the political temperature further, he said that water is a provincial matter but it is Nawaz Sharif who is providing it to Karachi.
No comments: Links to this post

#ArrestUsWeAreZardari - ‘Three arrested friends of Zardari should be presented in courts’ 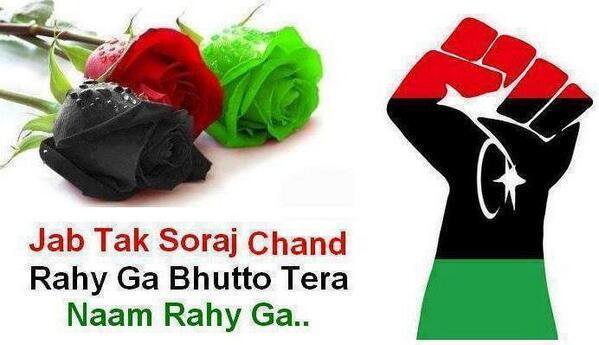 Opposition Leader in the National Assembly Syed Khursheed Shah said on Saturday three close aides of former president Asif Ali Zardari, who have been arrested, should be presented in the courts within the next 24 hours.
"If you want to arrest people for being Zardari’s friends, then you should arrest me too, I can also tell you a lot," he said while talking to media persons here at his residence in the Ministers’ Enclave. He said the arrested people included Zardari’s manager Ghulam Qadir Marri and Nawab Leghari.
He said the Sindh government has legal powers for the appointment of inspector general of police (IGP) of its choice.
"The federal government appointed five inspector generals of Islamabad Police and three secretaries of the Interior Ministry and in the same fashion the Sindh government also has the right to appoint the police chief of its choice," he said.
He said after explosion in Lahore, the Operation Raddul Fasaad was launched, the Rangers were given special powers, but the National Action Plan (NAP) was not fully implemented. “No matter how much the government speaks, no difference comes from just speaking," he added.
The opposition leader said the Muslims all over in the world and also in the Middle Eastern countries were being victimised and there was a need to get united against these atrocities. He said the government had failed to play its due role to unite the Muslim Ummah. “Saudi Arabia should come forward to end the differences between Muslims across the globe,” he remarked.
He said that Shaheed Zulfikar Ali Bhutto played a vital role in bringing the Muslim Ummah on a single platform and it is the responsibility of every Muslim to play his role for strengthening Islam. He said the rulers have played with the emotions of the people and before elections, the PML-N promised the people that it will provide electricity to everyone, but now the country was still facing a shortfall of 5,000MW.
The opposition leader said progress never comes by just making motorways or orange trains, rather it requires improving financial condition of the people. "The rulers promised that they will build motorways and highways in Sindh. Sadly, the highway here was converted into a motorway,” he remarked.
In reply to a question regarding the awaited verdict on the Panama case, the opposition leader said the verdict is yet to be announced and he hoped "the God gives the strength to make the right decision."
He said the government during the dharna days wanted to prorogue the National Assembly session but he advised the government to summon the joint sitting of parliament.
No comments: Links to this post 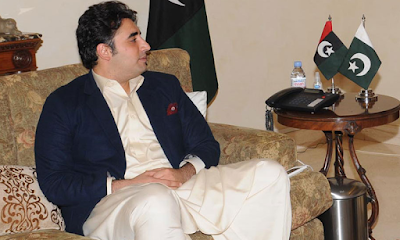 Chairman Pakistan Peoples Party Bilawal Bhutto Zardari has pledged that his Party will continue to pursue the mission of a strong and egalitarian Pakistan for which country’s nationalist and democratic leaders Shaheed Zulfikar Ali Bhutto and Shaheed Mohtarma Benazir Bhutto and thousands others laid down their lives fighting the overt and covert anti-Pakistan elements.
PPP Chairman conducted interviews from the candidates for PPP office-bearers of Dera Ghazi Khan Division, Districts Layyah, D G Khan and Rajanpur, and Multan Divisions’ Khaniwal and Vehari of South Punjab at Bilawal House, Lahore. Senior PPP leaders who were present during interviews include former prime minister Yousuf Raza Gilani, Makhdoom Ahmed Mahmood, Natasha Daultana, Shaukat Basra, Bashir Riaz, Abdul Qadir Shaheen etc.
The PPP Chairman said that we are not fighting war for power instead it is a war of ideology and the PPP is torch-bearer of the ideology of Pakistan professed by our founding fathers and their successors who embraced martyrdom but never accepted any adulteration in the ideology.
Bilawal Bhutto Zardari stated that PML-N has launched attacks on the PPP leaders and workers in Punjab and launched a multi-billion campaign of media advertisements portraying fake and false development schemes.
Bilawal Bhutto Zardari pointed out that Nawaz Sharif government has increased total public debt of the country by an unprecedented 35% i.e. Rs 5 trillion during last four years while it stood at Rs 13 trillion during 66 years since independence. Trade deficit has risen to $11.71 billion as exports have declined by whooping 16 % during Sharif government, which is a big challenge to the national economy and next government, he added.
He asked the candidates for the Party offices to get ready for a final showdown with the opponents in the next elections as the PPP organizations are being put into full gears to fight for the federation and the democratic rights of its federating units and the masses.
https://mediacellppp.wordpress.com/
No comments: Links to this post

Days of deprivation for the people of South Punjab are over: Bilawal Bhutto 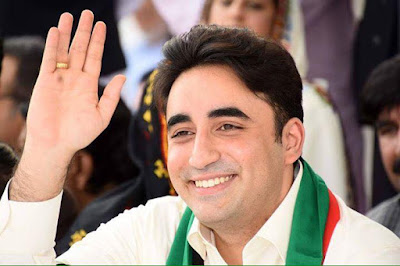 Chairman Pakistan Peoples Party Bilawal Bhutto Zardari said that days of deprivation for the people of South Punjab were over and asked the people of the region to get ready for the dawn of development, prosperity and equal opportunities.
The PPP Chairman stated this while talking to the PPP leaders and workers from South during interviews for the PPP candidates for different districts of South Punjab including Multan Division, Bahawalpur Division, and districts of Rahim Yar Khan, Bahawalpur, Bahawalnagar, and Lodhran at Bilawal House, Lahore.
PPP leaders including former Prime Minister Yousuf Raza Gilani, Makhdoom Ahmed Mahmood, Natasha Daultana, Shaukat Basra, Abdul Qadir Shaheen and others were also present on the occasion.
Bilawal Bhutto Zardari said that he felt sad to know that there was only 12% literacy rate in South Punjab while its share in the development budget in the province was meager.
He said that PPP has great plans for the poverty-ridden people of South Punjab and pledged to emancipate them from Takht-e-Raiwind in next elections.
Before the interviews, the family and children of Shaheed Imtiaz Ahmed met the PPP Chairman at Bilawal House. Shaheed Imtiaz Ahmed was killed during an attack on PPP South Punjab Information Secretary Shaukat Basra in Haroonabad.
Bilawal Bhutto Zardari expressed grave concern that the culprits involved were roaming freely and PML-N government was not ready to lay hands on them.
He said that Punjab government announced for fair investigations but in fact it appears to be hands in gloves with those behind the killing.