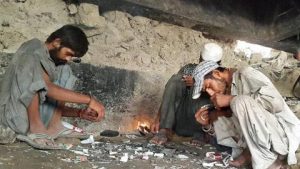 The famous Karkhano Market of Peshawar has become a sanctuary for drug addicts in the provincial capital where the abandoned Tokham–Peshawar railway track in front of Industrial Area Police picket can be seen with several groups of drug addicts consuming heroin freely in broad daylight.
The more ironic fact is that these drug addicts become aggressive at night time as reported by the local shopkeepers, who said that the addicts attack and rob the passerby with their infected sharp blades, knives and other tools to collect money to buy drugs for themselves.
They said that despite several complaints to Hayatabad Police Chowk Industrial Area police and ANF, no action was taken so far, adding that heroin and other drugs are being sold and consumed openly in Karkhano market, thus giving an impression that some influential people are behind them.
The shopkeepers of local markets, through a written complaint, said that the drug addicts consume heroin and other drugs on the railway track in groups, attracting the attention of passers-by especially children who often stop and watch the addicts.
Due to lukewarm attitude of police and anti-narcotics forces (ANF), the number of drug addicts is increasing day by day in Karkhano Market, posing a serious threat to locals including shopkeepers and customers who visit the market.
According to ANF, around seven million people in Pakistan are drug addicts including three million who use medicines without a prescription. As many as 700 people die every day in the country due to drug-related complications.
No comments: Links to this post

US Strategy In Afghanistan Requires Diplomacy And Military Power – Analysis

The brutal rape and killing of Zainab Ansari, a 7-year-old girl whose body was left in a garbage dump, has unleashed a wave of revulsion around Pakistan, revealing a string of child abductions and killings by a suspected serial predator and generating outrage at a culture of silence surrounding sexual abuse. Kasur is a congested district of around 2.5 million people in eastern Pakistan, near the border with India. The city of Kasur is surrounded by brick kilns and tanneries and has hundreds of small factories making shoes and embroideries, all of which employ children - making them vulnerable to abuse. ​The brutal rape of Zainab has roiled Conservative Pakistan and revealed a sexual predator who has raped and killed at least 11 girls in Zainab's hometown of Kasur. On Jan. 23, authorities announced the arrest of a suspect in connection with the series of killings, including Zainab's. A child protection committee has launched a program in schools warning children against going with strangers following the brutal rape of Zainab. https://www.voanews.com/a/after-girl-killing-pakistani-women-speak-out-on-abuse/4222152.html
No comments: Links to this post

Commentary: The White House is right to suspend aid to Pakistan

Daniel R. DePetris
President Trump’s decision to freeze approximately $2 billion in U.S. security assistance to Pakistan has received cautious support from senior lawmakers and foreign policy analysts. And while the political and military calculus of suspending aid payments is complex, the Trump administration’s approach is sound.
The $33.9 billion Washington has sent to Islamabad since 2002 may have earned it the right to supply American military efforts in Afghanistan through Pakistani territory, but it has failed to deter Pakistan from undermining those same efforts through its support for extremist groups. And while Washington and Islamabad worked successfully together in the hunt for senior al Qaeda members during the early years of the war, ties between the two countries have since been held hostage to mutual distrust, personality conflict, and even outright hostility. The occasional display of grudging cooperation notwithstanding, Pakistan has repeatedly shown its unwillingness to sever ties with U.S. enemies in Afghanistan and South Asia.
American priorities in the region are not Pakistani priorities. Washington and Islamabad have sharply different views on what constitutes success in Afghanistan, on how the Pakistani military should conduct its campaign against militancy, and on the nature of India’s regional influence.
Since 9/11, the United States has viewed Afghanistan as, first and foremost, a counterterrorism problem. Before the United States got distracted with institution-building and counterinsurgency operations, U.S. forces deployed to Afghanistan in October 2001 in order to drive the Taliban from Kabul, to uproot al Qaeda’s infrastructure, and to capture or kill its leader, Osama bin Laden. The mission was about retaliating against the group that had conducted the worst-ever terrorist attack on U.S. soil.
Pakistan’s main goal in Afghanistan, on the other hand, is to prevent the country from forging a strategic relationship with India. The historical and geopolitical rivalry with its larger neighbor has governed Pakistan’s national security policy since its founding in 1947. Pakistan’s military leadership has long seen Afghanistan as an arena in which to combat an Indian influence they view as destabilizing, perfidious, and threatening to Pakistan’s own sovereignty and national security. To the United States, Indian investment in Afghanistan and constructive Indian-Afghan relations are valuable for Kabul’s fiscal and political health. In Pakistan, these same developments are understood as efforts by India to enhance its geopolitical power at the expense of Pakistan, and to increase pressure on Pakistan’s military via a new front on its western border.
Despite their bravado, Pakistani officials realize how economically vibrant, politically stable, and militarily capable New Delhi is in comparison to Islamabad. Pakistan has attempted to compensate for this strategic imbalance in three ways: by improving the range of its ballistic missile capability so its warheads can strike deep into India; by accelerating the pace of its nuclear weapons development; and by continuing to develop relationships with extremist groups that can be counted on to help check Indian influence. In the disputed territory of Kashmir, in Afghanistan, and in India itself, Pakistan-based extremist groups have launched attacks on military installations and civilian targets, killing hundreds of people and bringing the two nuclear-armed rivals closer to a military confrontation. While the Pakistani government has always denied direct involvement with these organizations, U.S. officials believe that Islamabad continues to view these militants as critical anti-India tools in its national security toolbox. Some senior American officials have taken these concerns public. In congressional testimony, former Chairman of the Joint Chiefs Admiral Michael Mullen noted that Pakistani intelligence provided Haqqani militants with support during their attacks against a U.S. army base and a Kabul hotel. In 2008, after a group of militants attacked the Indian Embassy in Kabul, U.S. officials blamed Pakistan’s Inter-Services Intelligence (ISI) directorate for assisting in the attack. As Secretary of State, Hillary Clinton reportedly confronted her Pakistani counterparts with intelligence linking the ISI to insurgents who fought against U.S. soldiers in Afghanistan.
Yet even these complaints, made in public and backed by strong evidence, failed to change the Pakistanis’ behavior. Washington mistakenly believed Pakistani leaders would change the India-centric outlook that had been ingrained in the national psyche for seven decades in exchange for tens of billions of dollars. But Pakistan views the cultivation of groups like the Taliban, Lashkar-e-Taiba, and Jaish-e-Mohammed as essential to its national security. As long as Pakistan’s leadership continues to view India as its main concern, its ties to these extremist groups will always be worth more than tens of billions of dollars from Washington.
To be clear, the stick is unlikely to work where the carrot failed. Those in Washington who hope that freezing aid may suddenly scare Islamabad back into line will almost certainly be disappointed. The national security interests of the United States and Pakistan diverge on Afghanistan and South Asia to such an extent that even tougher measures - such as outright aid termination, the withdrawal of Pakistan’s status as an ally, or selective sanctions on Pakistani security officials - are unlikely to be potent enough to sever Pakistan’s ties with the militants its intelligence services have courted for decades. The Trump administration rightly judged that it was time for the United States to cut its losses.
Pakistan is not a true ally, friend, or partner to the United States, but a nation whose security interests and counterterrorism goals in South Asia are not aligned with what Washington is hoping to accomplish. Until those interests are in sync - a dubious prospect at best - the Haqqani network will continue to live in comfort within Pakistan’s borders, confident in the notion that the Pakistani military officers running national security will leave them alone. American policymakers must take a step back, thoroughly evaluate the U.S. relationship with Pakistan, and determine whether further cooperation is even possible. That decision must be made carefully and explained to the American taxpayers whose hard-earned money has, for decades, funded Pakistan’s aid payments. Until then, it is long past time for Washington to stop throwing good money after bad. 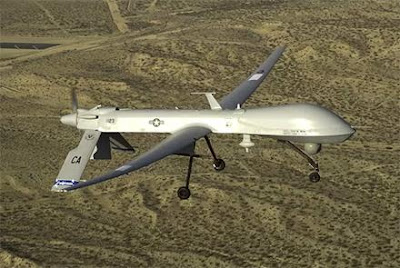 The insurgent commander was reportedly killed during a twin drone strike by US forces that had targeted a house allegedly belonging to Afghan refugees.
A Haqqani network commander, Ehsan, also known as Khawari, and two of his companions were allegedly killed during a twin drone strike conducted in North Waziristan, DawnNews reported on Wednesday.
The report said that sources within the political administration of Speen Thal Dapa Mamozai said the drone strikes, allegedly carried out by US spy planes, targeted a house belonging to Afghan refugees.
Station House Officer Thal, Ameer Zaman confirmed the death of a man named Ehsan, also known as Khawari.
Local sources from the Orakzai Agency said the strike was carried out on a Haqqani Network hideout.
Dawn news reported on January 17, in the first drone strike of the year, one man was seriously injured in Kurram Agency's Badshah Kot area near the Afghanistan-Pakistan border.
Two people were killed on December 26, 2017 in another drone strike which targeted a vehicle. The strike occurred in the Mata Sangar area of Kurram.
In the same month, a US drone fired a missile at a compound in the same area. The missile had been fired at the compound at around 9pm, but no casualties were reported.
According to Dawn news, in November 2017, three suspected militants were killed in another drone strike targeting a militant compound in Afghanistan's Paktia province near the Pak-Afghan border.
Dawn news reports that drone strikes have surged in Kurram in the wake of US President Donald Trump’s announcement of a new Afghan policy in August, in which Pakistan was also accused of offering “safe havens to agents of chaos”.
No comments: Links to this post 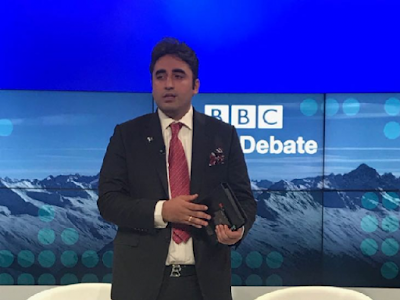 Misinformation or fake news has long been the component of information warfare, but it can have dangerous consequences, said Pakistan Peoples Party Chairperson Bilawal Bhutto-Zardari on Wednesday. 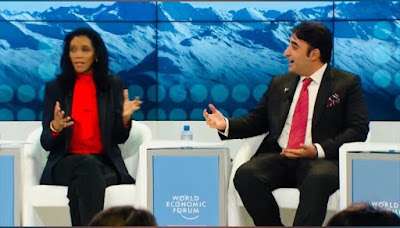 While talking about the issue at a session titled ‘Fake News versus Real Politics’ at the World Economic Forum, Bilawal said fake news gained prominence at the time of United States presidential elections.
He added that fake news is going to stay around for ages, but it is the people should educate and empower themselves in order to be updated with the correct information.
Bilawal said politicians use the term to demonise the press, but for credible news one could look up to non-traditional actors who can be a a reliable source.
Fake news is said to be US President Donald Trump’s favourite term. A few days back he tweeted about announcing awards of the most dishonest and corrupt media of the year.
The term is also said to be 2017’s word of the year.
http://www.thesindhtimes.com/pak/fake-news-can-dangerous-consequences-bilawal-bhutto/
No comments: Links to this post 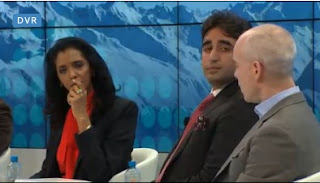