WITH HIV infection rates climbing in Pakistan, a new national survey has found that 133,529 people are believed to have contracted the virus. This $1m study — funded by the Global Fund and with UNAIDS support — not only warns of a resurging HIV/AIDS epidemic, but identifies new cases among injecting drug users, who comprise 33pc of all HIV cases in Pakistan, and commercial sex workers.

Meanwhile, on Thursday this newspaper published a report on the rise in HIV cases and the need to scale up national response programmes before the virus spreads. Concurring with the findings of the national survey, our report investigates instances of institutional inadequacies and inequitable fund distribution in the treatment of HIV.

The lack of political will, bureaucratic challenges and the stigma attached to HIV/AIDS not only prevent early diagnosis and treatment but also leave marginalised and poor sufferers — especially drug-users — with fewer healthcare options. Differing levels of treatment offered in the provinces has made it impossible to curb new cases. Halting treatment in KP, for instance, because of the lack of disbursement of funds, justifies the concerns of non-governmental partners working with the national HIV programme. They attribute this failure to poor administration, nonexistent health policies and lapsing funds.
Sexual health campaigns that target high-risk groups such as drug users, transgenders, returning migrant workers and sex workers is one way to address the stigma attached to sufferers of HIV and to mitigate the risk of transmission. Comprehensive control programmes must be integrated with other health strategies so that people have access to testing opportunities in healthcare settings and are provided lifesaving antiretroviral therapy. If accessible, these interventions will improve early diagnosis and fast-track treatment. Preventing further transmission and moving towards eradicating AIDs by 2030, as pledged by Pakistan as part of its SDG commitments, requires political will with a focus on education and treatment for all HIV sufferers.

The air chief waxes eloquent about taking out Pakistan’s nukes. Even the tactical ones–the Nasrs–spread across hundreds of field commanders. How are his planes going to do that?
Pakistan’s nukes are its crown jewels. Until 1971, the country was full of braggadocio and machismo, in equal measure, and launched 1948 and 1965, with arguable success. 1971 knocked off its nose. And made it paranoid about India.
PMs since 1971, except Morarji, but Indira and Rajiv certainly, contemplated, seriously, knocking out Pakistan’s nuke program. But both realized that they wouldn’t succeed. Vajpayee did 1998, in part, to ferret out if indeed Pakistan had nukes. To his utter disappointment, and shock, it did, and as efficient or inefficient as India’s.
By then Pakistan had had a successful nose transplant. India could never pull a 1971 on it again.
Donald Trump ranted and railed against Pakistan in August and commanded and commandeered India to do its fair share in Afghanistan. But any man who throws a roll of paper towel at his hurricane-ravaged subjects as if he was throwing a basketball and then eyes it as keenly as if he were in the process of making a three-pointer, is such a man fit enough to be king?
His administration is collapsing. As we speak, one of the mature adults in his cabinet, Rex Tillerson, the foreign minister, is about to quit or be fired. Take your pick. Trump surrounds himself by “winning” generals. Really? All the three generals that he has close to him–McMaster, the national security advisor; Mattis, the defence minister; Kelley, his chief of staff–have fought and failed in Iraq and Afghanistan.
Oh, but who cares about the war; each of us won our individual battles. In Anbar in Iraq and Helmand in Afghanistan and the lord knows where else. So we can all claim to be modern-day Douglas MacArthurs. And now that we are finally in charge, we will surely turn the tide and win the war.
Pakistan is not impressed. Especially with its nukes and missiles. It has been hearing warlike rhetoric from American presidents and foreign ministers and defence ministers and ambassadors since 9/11. The fusillade from Trump is one in a series of many emanating from Washington. Empty of course.
Pakistan is as close to military rule without technically being under military rule. The current prime minister is a non-entity. The ousted prime minister is trying to stay alive politically, but he will not be able to do so. The military hates him. In part because the military hates India and Nawaz likes India.
The military is convinced that India is up to no good in Balochistan. To what extent and of what kind, no one really knows. One Jadhav doesn’t a summer make. Or make India the mother of South Asian terror.
I mean, if India is the mother of South Asian terror, and Pakistan the father of South Asian terror, imagine how pugnacious the baby will be. But let’s not bring love-jihad in between jihad-jihad.
Pakistan sees red whenever India and Afghanistan are mentioned together. All this air talk from India makes it seethe further and gives it a potent handle to show the world that India is eternally hostile to it.
The air chief claimed that India can win a two-front war. That is entirely debatable. He said that he has a Plan B. Well, his Plan B, obvious as it is, is Pakistan’s Plan A.
The Soviets fled Afghanistan in 1989 in part because half their army was opiated by Afghan poppies. They also faced a decade-long war by proxy by the then-other superpower, the US. The Soviets had lost all appetite for war. Yet the puppet Afghan regime left behind by them lasted three years.
The Americans have been beaten and bruised but haven’t fallen as yet. They are not going to just up and leave. The trick for them, and for India, is to fatigue out the Taliban as much as they can. Who knows in three to four years the balance will tilt somewhat towards the Yanks and the Taliban will be ready to negotiate?
But this Pakistan doesn’t want. It wants the Taliban to grab Kabul now. That would be disastrous for America. And India. So what should India do? Instead of boots on ground in Afghanistan, send military “advisors” and trainers to support the Americans and keep propping up the puppet regime in Kabul until the Taliban sees sense.
And keep all the airy-fairy talk to itself.
No comments: Links to this post

The death toll from a suicide bombing at a Shiite shrine in the country’s southwest increased to 24 after four victims died at a hospital overnight, police said Saturday.
A suicide bomber struck the shrine packed with worshippers in a remote village in Jhal Magsi district, about 400 kilometers (240 miles) east of Quetta in Baluchistan province on Thursday.
Senior police officer Mohammad Iqbal said that more than 20 victims were still receiving treatment, some with critical wounds.
The bomber detonated his explosives vest when he was stopped for a routine search by a police officer guarding the shrine. Five children, a woman and two police officers were among those killed.
The Islamic State group claimed responsibility for the attack. The IS has claimed responsibility for several past attacks in Baluchistan, which has been the scene of a low-level insurgency by Baluch nationalists and separatists demanding more autonomy and a greater share in the region’s natural resources of oil and gas.
Sunni extremists and the IS perceive minority Shiites as apostates and have carried out many such attacks across the country.
At least 75 Shiites were killed in twin bombings at a market in Parachinar in the country’s northwest In June this year. Lashkar-e-Jhangvi, a sectarian Sunni extremist group, claimed responsibility. In February, an Islamic State group suicide bomber struck inside a famed Sufi shrine in southern Sindh province, killing 88 worshippes engaged in ‘Dhamal,’ a devotional dance.
Also on Saturday in Baluchistan, at least 13 people were killed and 20 others wounded when a passenger van collided head on with a bus on a highway near the provincial capital of Quetta.
Muqeem Baig, a spokesman for Quetta’s main hospital, said victims were brought to the hospital from the accident site some 20 miles (32 kilometers) south of the city. Such accidents are common in Pakistan, where motorists often disregard traffic rules and safety standards.
No comments: Links to this post

There is no justice for Bhuttos; courts have failed us once again: Aseefa Bhutto. 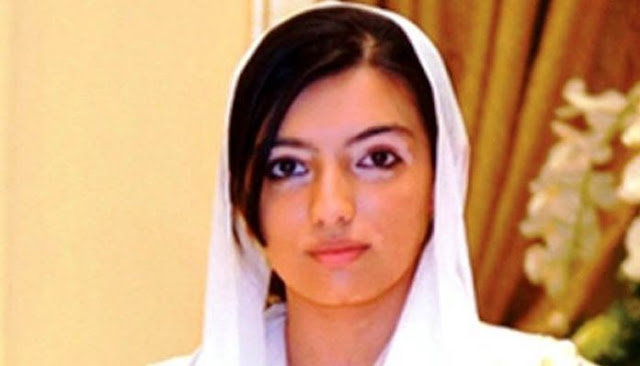 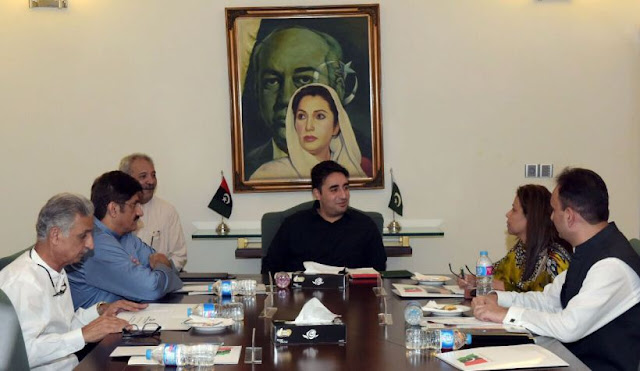 Chairman Pakistan Peoples Party Bilawal Bhutto Zardari has said that he wants every kid, whether boy or girl, should be enrolled for education in Sindh and rest of the country.
“Education is the only weapon to defeat evils spread by ignorance and illiteracy and for grooming a harmonious society,” Chairman Bilawal Bhutto stated while presiding over a meeting about efforts being made by Sindh government for improving education and literacy in the province.
The meeting was attended by Chief Minister Syed Murad Ali Shah, Minister Education Jam Mehtab Dehar, Managing Director of Sindh Education Foundation (SEF) Ms. Naheed S. Durrani and others.
Team led by Chief Minister Syed Murad Ali Shah briefed the Chairman about steps and actions taken by the Sindh government in education sector and improvement in enrolment of out-of-school children.
Bilawal Bhutto Zardari said that education has always been a key priority in the Party manifesto and urged Sindh government to play more proactive role in achieving the goals.
PPP Chairman said that though Sindh government has reopened thousands of closed schools but he wants this syndrome should be completely eradicated.
He pointed out that World Bank has appreciated the smart solutions adopted by the Sindh government to improve education.
It may be recalled that World Bank highlighted in a report that the Sindh School Monitoring System, which spreads across 15 districts and to the remotest parts of the province. Plans are underway to expand it to the entire province. This first digital system in the education sector in Pakistan allows transparent and effective monitoring of staff, students and school infrastructure. More than 210,000 teaching and non-teaching staff have been profiled using biometric information, covering more than 26,200 schools.
No comments: Links to this post