Video Report - Putin Informs Public on What Has Been Agreed on G20 Summit in Hamburg, Germany

The revival of the Lal Masjid Islamabad as the citadel of extremism exposes the lack of will to effectively deal with the menace of militancy. The mosque’s link with outlawed takfiri militant and sectarian groups is an open secret. But the allegiance of the Maulvi Abdul Aziz’s disciples to the Daesh is much more serious. Unsurprisingly, the intelligence warning and the open support for the global militant group by the women and girls in Jamia Hafsa are ignored by the administration. The impunity enjoyed by Abdul Aziz and other radical clerics raises fears of the capital returning to a 2007-like situation. The threat is much more serious with the mushroom growth of madressah populations in the city. It seems that the state has not learnt any lesson from the events that led to the bloody siege that shook the country.

These are the observations of eminent Pakistan journalist and analyst Zahid Hussain who has written on the Legacy of Lal Masjid in Dawn EOS section on July 9. He wrote:
An intelligence report last year warned that the Lal Masjid’s links with militant groups involved in terrorist activities presented a grave security threat. The report also cited a video message recorded by students of Jamia Hafsa pledging allegiance to the militant group, Daesh (ISIS).
Return to status quo?
Ironically, a decade after the bloody siege, Lal Masjid remains a symbol of radical Islam.
Abdul Aziz who incited armed rebellion against the state and sought to establish his own version of retrogressive Islamic order is now re-installed at the pulpits defending militant actions.
Most of the cases against the cleric have either been quashed by the courts or dropped by the government.
Clearly, the long arm of the law does not reach a proclaimed offender even if he defies the country’s Constitution and openly defends militant violence. 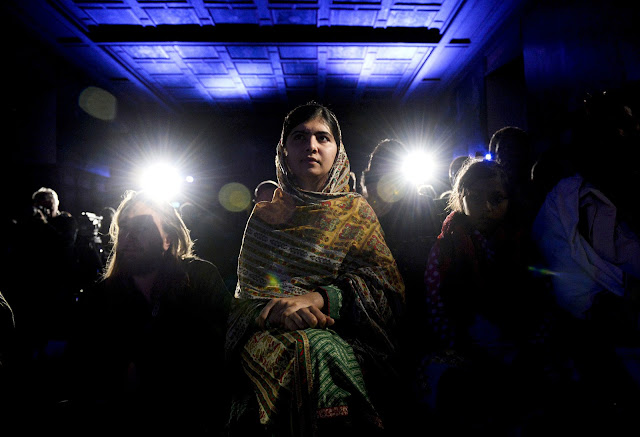 Yesterday Malala Day was celebrated across the world in connection with the 20th birthday of famous female education activist and noble peace prize winner Malala Yousafzai.
The United Nations had declared July 12th as Malala Day to commemorate not only young activist's birthday, but also the day she delivered a powerful speech at the UN to call for worldwide access to education.
She was targeted by the Taliban in an assassination attempt for speaking against them and encouraging young people to use education to battle against them.

Pakistan - #PPP has no secret contacts with govt, says Sherry

The Pakistan People’s Party (PPP) senior leader Sherry Rehman said on Wednesday that her party had no secret contacts with the government while Aitzaz Ahsan made it clear that Prime Minister Nawaz Sharif would have to step down to save the democratic system. 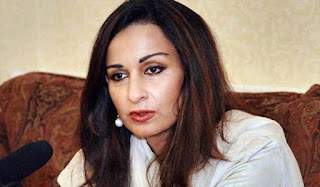 They said that the government and the premier had become controversial following the report of the Joint Investigation Team and it would be better for him to resign to avert a political crisis in the country.
“If Prime Minister Nawaz Sharif did not resign, the country would be in the grip of a deep political crisis and his resignation would also expose the conspiracy which the government claimed,” said opposition leader in the Senate Aitzaz Ahsan, Vice President PPP Parliamentarians Senator Sherry Rehman and Senator Farhatullah Babar while addressing a press conference here on Wednesday.
Aitzaz Ahsan said initial contacts were made with the other opposition parties for formulating a joint struggle inside and outside parliament to force the prime minister to resign.“The Senate session has been convened on Monday on the requisition of the opposition,” he said.
Aitzaz Ahsan said the Sharif family has looted the country as under a plan one son was sent to Saudi Arabia for the kickbacks and commission and the other to London to make the investment from this money. ‘The sons were sending Rs1.5 billion in the shape of gifts,” he said and added that through this move, the Sharif family was doing business and politics.
The opposition leader in the Senate said that Nawaz Sharif paid a tax of Rs477 from 1993 to 1996 and a tax receipt has been sent to the JIT.To a question about his earlier stance on the formation of the JIT, Aitzaz Ahsan said there were apprehensions that the JIT may not take an independent decision but now he appreciates the JIT for its report. He questioned the PML-N for resembling Nawaz Sharif with Zulfikar Ali Bhutto and said there was no corruption case against Zulfikar Ali Bhutto. ‘The conspiracy against Zulfikar Ali Bhutto was hatched by the army and judiciary and what message Nawaz Sharif wanted to give by pointing out the conspiracy,” he said.
To a question on the silence of Interior Minister Chaudhry Nisar Ali Khan, Aitzaz Ahsan refused to make any comment on the silence of Ch Nisar Ali Khan saying that “I will not make any comment on the silence of Chaudhry Nisar Ali Khan as I was already riding on his nerves.”
Vice President PPP Parliamentarians Senator Sherry Rehman said the Sharif family failed to provide money trail of their wealth and did not even give any money trail of UED 12 million.Senator Sherry Rehman denied any backdoor contacts with the PML-N and said the PPP believes that to save the democratic system, the prime minister will have to go.

Chairman Pakistan Peoples Party Bilawal Bhutto Zardari has said that his Party would merge FATA into Khyber-Pakhtunkhwa as per the aspiration of the people of tribal areas when the PPP returns to power, according to a statement issued here on Wednesday. 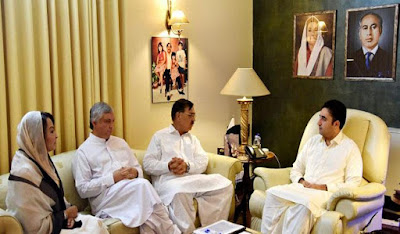 The PPP Chairman held out this assurance during a meeting with Akhunzada Chattan, Vice President Pakistan Peoples Party Khyber-Pakhtunkhwa and former MNA, who called on him at Zardari House, Islamabad, the statement said.
The PPP Chairman also admired Akhunzada Chattan for holding big public meeting of the Party in Bajaur Agency, adding that PPP would continue political activities in FATA for the rights of the tribal people.
Bilawal Bhutto Zardari said in August 2011, then-President Asif Ali Zardari amended the Frontier Crimes Regulation (FCR), a British-era law curtailing FATA residents’ rights, and extended the Political Parties Act (PPA) 2002 to the tribal areas. Tribal Areas saw the first-ever Party-based elections in 2013 following the PPP legislation.