Russia’s Foreign Ministry says there is no reaction to these events from Afghan security and defense agencies or the US and NATO forces in Afghanistan.
Russia has recorded flights of unidentified helicopters delivering weapons to the Taliban and Daesh militants in Afghanistan, Russian Foreign Ministry Spokeswoman Maria Zakharova said at a briefing on Thursday.
“We again draw attention to flights by “unidentified” helicopters in northern Afghanistan to deliver arms and ammunition to local ISIS (Daesh) militants and the Taliban cooperating with this terrorist group. Specifically, Afghan media and local residents claim that these flights have been recorded in the Sar-e-Pul Province," the Russian diplomat said.
“We note that this is happening in the direct vicinity of Central Asian states’ borders and many ISIS (Daesh) militants in Afghanistan hail from these countries. There is no reaction to these events either from Afghan security, defense and law-enforcement agencies or the command of the US/NATO contingent deployed there.
The Russian diplomat said they want to know who is behind these flights.
“It is legitimate to ask, who is behind these flights? Who is arming the terrorists and secretly creating their bases near the southern borders of the CIS? Why is this happening if NATO command is effectively in control of Afghanistan’s airspace?” she asked.
Russia has made these claims many times. In February, Russia’s Ambassador to Afghanistan Alexander Mantytsky, quoted by TASS news agency, said Moscow has not received any information from Western partners on the origin of helicopters that could be involved in transporting terrorists to Afghanistan.
"Unfortunately, neither official Kabul nor our Western partners have been able to give any accurate and credible information on the origin and the goals of unidentified helicopters flying over the territory of the IRA (the Islamic Republic of Afghanistan) and possibly involved in transporting terrorists of the IS [Daesh] and the equipment they need," the Russian ambassador said in February.
TASS reported that the Russian diplomat stressed Russia has repeatedly raised the issue – also with UNAMA.

#Afghanistan: Who Is Winning? – Analysis

By Neville Teller
“You have been in Afghanistan, I perceive,” says Sherlock Holmes on first meeting Dr Watson, later to be his great friend and companion. But already, in the first words of the first Sherlock Holmes novel, A Study in Scarlet, Watson has provided an account of his unhappy experiences in the Second Anglo-Afghan War.
Because of its position plumb in the middle of central Asia, Afghanistan is a prize that has been fought over and won by foreign occupiers many times in its long history. Its domestic story is equally turbulent, with warring tribes battling it out over the centuries for power and control. In 2018 the basic pattern persists.
It was in the first part of the 19th century, at the apogee of its imperial history, that Great Britain perceived Afghanistan to be a major strategic objective. The Russian empire was expanding rapidly to its south, and Afghanistan, which lay adjacent to Britain’s Indian Raj, could not be allowed to fall within the Russian sphere of influence and thus threaten India. Britain first invaded the country in 1838, at the start of what came to be known as “the Great Game” – a struggle for power and influence in Central Asia between the British and the Russian empires. It was a disaster. Nothing deterred it invaded a second time in 1878, and was more successful. It gained control over Afghanistan’s external affairs, and established the country as a permanent buffer between its Indian empire and Russia.
The dynamics of the situation changed dramatically following Britain’s withdrawal from India in 1947. From the early 1950s pro- Communist, indeed pro-Soviet, rulers prevailed in Afghanistan, and twenty years later general Mohammed Daoud Khan overthrew the monarchy and established a republic closely aligned to the USSR, with himself as president. When he was killed in a coup five years later a battle for power ensued, but a new element had entered the situation − the rise of conservative Islamic and ethnic religious leaders. Swiftly gaining clout, they established a guerilla movement called the Mujahadeen and engineered an armed revolt against the pro-Soviet leadership.
When President Nur Mohammad Taraki was assassinated, alarm bells were set ringing in the Kremlin, and in 1979 the USSR invaded. The Mujahadeen rebels united against the Soviet invaders as well as the USSR-backed Afghan Army, and the fighting dragged on year after year. Finally the situation became a microcosm of the Cold War, and by 1986 the Mujahadeen were receiving arms from the United States and Britain.
In 1989 the USSR admitted defeat and withdrew its troops, but the turbulence had left its legacy − the establishment by Osama bin Laden of the jihadist group al-Qaeda, later the rise of the Islamist organization calling itself the Taliban, and finally the incursion into Afghanistan of Islamic State (IS). A series of terrorist attacks by al-Qaeda against American embassies in Africa led to demands for bin Laden to be handed over – demands ignored by the Taliban. The final straw came with the destruction of the twin towers in New York on September 11, 2001. Within a month US and British forces began air-strikes against Taliban targets in Afghanistan, prior to an invasion by ground troops. The Taliban were chased from their strongholds.
But 17 years later, despite enormous efforts by the US and Britain to stabilize the country, train the military and establish a democratic form of government, the Taliban are still fighting against government forces around Kabul and engaged in a three-way battle against IS in the north.
IS first emerged in Afghanistan in 2015. Although the caliphate it proclaimed in Iraq and Syria has been swept away, the Afghan branch has endured. It has built a stronghold in the north-eastern province of Nangarhar and parts of Kunar. The local populations have been beaten into cowed submission. Beheadings and public executions have become commonplace. Neither US-led counter-terrorism forces, nor the Taliban, have managed to root it out. Meanwhile the Taliban seem to be gaining military, political and diplomatic influence with its assault on the strategically important town of Ghazni city, which links Kabul with southern Afghanistan. On July 29 discussions actually took place between the Taliban and the US about possible peace talks. The Taliban have also been gaining increased attention from Russia recently − Washington has accused Moscow of arming them. The most significant sign of the Taliban’s increasing clout was the four-day meeting early in August between a Taliban delegation and the Uzbekistan government, following an offer made by Uzbek President Shavkat Mirziyoyev in March to broker peace in Afghanistan. Suhail Shaheen, spokesman for the Taliban, said that discussions had covered everything from withdrawal of international troops from Afghanistan to possible Uzbek-funded development projects that could include railway lines and electricity.
The West, however, has taken a hard line against the Taliban’s latest campaigns. On August 13 the UK prime minister, Theresa May, announced that 440 more British military personnel would join the NATO mission in Afghanistan whose task is to train, advise and assist the Afghan security forces. It is, in a way, an admission of defeat. It is almost four years since British troops left the heat and dust of Afghanistan’s Helmand province where hundreds lost their lives. Today the Taliban still control most of Helmand.
The same is largely true of the Americans. Although they returned two years ago in smaller numbers than previously, their commander, Brigadier General Ben Watson, thought the decision in 2014 by US and British forces to leave “premature”. If the Americans had not returned, he says: “I would imagine that Helmand would be pretty solidly under the Taliban right now.”
History shows that Afghanistan is both a military quagmire and a political and diplomatic minefield. The current fighting seems to have narrowed down to a battle for Western values against the Islamist aspirations of both the Taliban and IS. It does not seem to be a battle with a foreseeable outcome.

A Pakistani mob attacked an Ahmadi Mosque in Ghaseet Pura, Faisalabad on Thursday evening, during the clash two Ahmadis were injured. According to the Police report the mob attack occurred around 7PM Thursday evening, allegedly due to a dispute between Ahmadi & Sunni teenagers over a cockfight.
Police claimed that the dispute escalated when some individuals opened fire, six people including two Ahmadis were injured as a result. The mob then went down to the local Ahmadi Mosque and started burning items in there.
Spokesperson for the Ahmadiyya Community in Pakistan, Saleemuddin claimed that at least 6 Ahmadis had been injured and “a minor dispute between 2 persons” was “manipulated by the Mullahs”.

"We Stand By Our Readout": US On Statement About Imran Khan-Pompeo Call 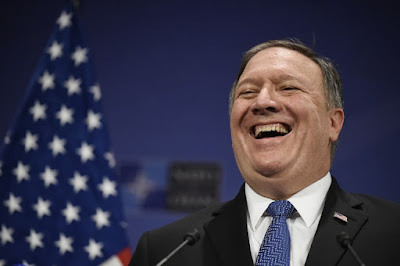