🇬🇧 Will Brexit break up the UK? | The Stream

The Pakistan People’s Party (PPP) Chairman Bilawal Bhutto Zardari warned the government of a "countrywide movement" if it does not renegotiate its deal with the International Monetary Fund (IMF). 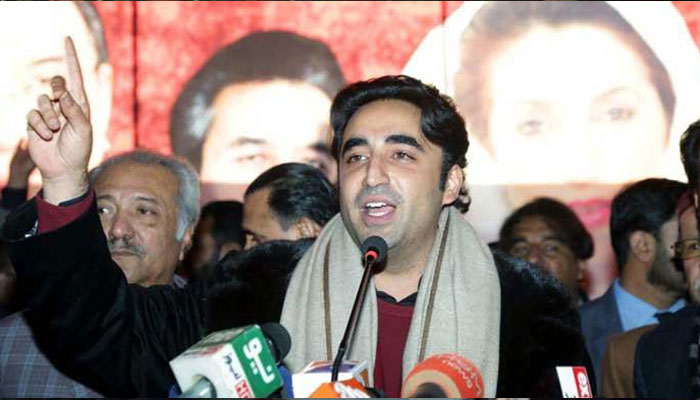 The PPP chairman was speaking at the inauguration event of the People's Urban Forest program in Lyari on Tuesday, Geo News reported.
He labeled it the "PTIMF" budget and said that the government had not negotiated the appropriate budget for the people. "We call upon the government to renegotiate its deal with the IMF," he said. "If that does not happen, we will launch a countrywide movement against this budget which is an enemy of the people,” he added. The PPP chairman said that neither did the people of Pakistan nor the PPP accept the budget by the PTI government. He blamed the PTI, saying that their government was robbing people of their economic rights.
“The federal government is robbing people of their economic rights,” he said. “Last year they gave us less than Rs100 billion in the NFC Award. This year, they have provided us Rs140 billion. With such an amount, how can we give employment to our people?” he asked.
He said that the PPP had always empowered the poor of the country and made policies for their welfare. Bilawal said the PPP had always provided employment to the people of Pakistan. “If arrangements could not be made to employ people in Pakistan then we ensured that their passports were made free so they could seek employment abroad,” he said.
Bilawal described the “Benazir Income Support Programme (BISP)” as a revolutionary concept and said that it was the first safety net initiative of Pakistan.
He blamed the government for “robbing” the people of the BISP and the money that was given to them as a result of the program. The PPP chairman called upon the people to become his source of strength so that the party is able to form its government again. Meanwhile, on the occasion of Kashmir Solidarity Day, Bilawal said that the only solution to the Kashmir issue is to respect to the wishes of the Kashmiri people and plebiscite in light of the UN resolutions to allow them to determine their own fate.
“The inaction of the international community in enforcing the UN resolutions had been a betrayal of the people of Kashmir,” he said. Bilawal said that every city, street and village in Pakistan is united by a single call, a call of solidarity with our Kashmiri brothers and sisters. “The people of Pakistan stand shoulder to shoulder with the Kashmiri people in the struggle for their right to self-determination,” he said.

A US school named after Malala Yousafzai, the globally renowned education activist,  has begun operations.
The elementary school in Fort Bend County, Texas, is named after the youngest Nobel Prize winner. The school opened its doors to students last week and “plans to nurture Yousafzai’s mission of education and acceptance”, the US Consulate said in a Twitter message on January 15.
Earlier called the District 51 Elementary School, the school was recently renamed Malala Yousafzai Elementary School during a Board Meeting on December 17, in which the Fort Bend ISD Board of Trustees voted to rename the school in honor of Malala. The name was chosen following a process that included submissions from the community.
In fall, the District had asked the FBISD community to submit nominations for the new facility, and then established a committee to select the name. More than 100 names were submitted for consideration by the committee that consisted of teachers, parents and students, community members, staff and a Board member.
Malala is a Pakistani education activist and the youngest ever Nobel Peace Prize winner. She is a global voice for human rights advocacy, especially the education of women and children. She rose to international prominence after she was shot by the Taliban in 2012 in Swat for speaking up against the militants’ activities in the area, especially with respect to their refusal to allow girls seek education.
After she was shot, her family moved to London and Malala now studies at Oxford University.
No comments: Links to this post

Pervez Hoodbhoy, a prominent Pakistani nuclear physicist and defense analyst, criticized his country’s government and said that “normal countries” worked for the betterment of their citizens. Speaking at a cultural festival in Karachi Saturday, Hoodbhoy said that Pakistan needed to “become a normal country”.
He added, “Pakistan is in a state of confusion because it was born in a state of confusion.”
Hoodbhoy also criticized the two-nation theory proposed by Pakistan’s founder Muhammad Ali Jinnah, which led to the bifurcation of British-ruled India into India and Pakistan. He explained, “The basis of Pakistan as articulated by Jinnah was that there are only two nations that live on this subcontinent, they are mutually hostile and can never live in peace. The second part was that Muslims must form a nation”.“The second part is completely nonsensical if Muslims formed a nation which would live at peace with every part of that nation we would not have Bangladesh,” added Hoodbhoy.


He also referred to Indian Prime Minister Narendra Modi and said, “Given Modi’s ascent to power…we can see that hostility still exists between religions.”

Vocal against the current establishment
This not the first time Hoodbhoy has criticized the ruling establishment.
In a 2015 interview with The Diplomat, he said, “The liberal doesn’t want any ideologue, or an Islamic, Hindu, Christian, or Marxist state telling him or her what to do.”
He was also included in Foreign Policy magazine’s list of the 100 most influential global thinkers in 2011 for his “bold secular defiance”.
With a PhD in nuclear physics, Hoodbhoy serves as a distinguished professor of mathematics and physics at Zohra and ZZ Ahmed Foundation, Forman Christian College, Lahore.
He is a regular columnist with Pakistani daily Dawn and has been consistently vocal about the state of politics and media in his country. “The real fountainhead of irrationality in Pakistan is its electronic media. Cheap posturing, thrilling sound-bytes, unsupported claims — everything goes. In particular, you have the media mujahideen who have done enormous damage to the population’s power to reason,” he said in The Diplomat interview.
Criticized the two-nation theory
At the festival, Hoodbhoy expressed his disagreement with Jinnah over the formation of Pakistan, “Jinnah was never able to put down what Pakistan was supposed to be. He never wrote a single research paper or an essay.”
He said that while the broader idea of Pakistan was Muslim unity, this has not proven to be true. “If Muslims could live in peace together, we wouldn’t have the separatist movement in Balochistan, which again no one is allowed to talk about”.He also referred to the 1971 war and creation of Bangladesh and said, “State of confusion should have ended in 1971 when the two nation theory went into the Bay of Bengal. We should have gotten rid of it. It is nonsense today”.
‘Pakistan needs no ideology’
For Hoodbhoy the idea of Pakistan is “built in the common interest” of the Balochis, Sindhis, Punjabis, Pathans, Gilgits etc.


“Today, we don’t need an ideology for Pakistan,” he maintained and added that this was not a country for armed forces but a country for the people.He praised Bangladesh for its economic growth as well. “Look at Bangladesh, who were our cousins, they are doing much better than we are. Their forex reserves are four times ours and their quality of index is so much better.”