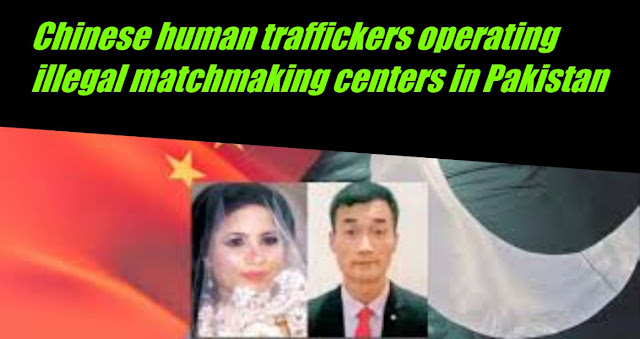 When Natasha Khokar was married off to a Chinese man last year, she was promised a life of wealth in a posh home. Instead, she was locked up in a shanty with not even a quilt or a toilet.
“It was like a bad dream,” said Khokar, 27, describing her short marriage, which a local broker fixed in September after promising her Christian family a groom of the same faith and 200,000 rupees ($1,413). They got neither.“It’s all behind me now,” she told the Thomson Reuters Foundation from her home province of Punjab, where she returned in December after her uncle paid her airfare home.Khokar is one of hundreds of Christian women in Pakistan who have been trafficked to China to meet a growing demand for foreign brides - the legacy of Beijing’s one-child policy, which has seen families abort female fetuses for decades.Khokar was only able to escape because she called a journalist in Pakistan who threatened to broadcast her story. Khokar’s broker then agreed to let her go, although she said he threatened to kill her if she did not “keep my mouth shut”.
Since last year, a network of illicit marriage brokers has been targeting mainly members of Pakistan’s impoverished Christian minority, promising hundreds of thousands of rupees in exchange for their daughters, campaigners say.
But once in China, the reality is often starkly different, said Saleem Iqbal a Christian activist based in Punjab’s capital city, Lahore, who has counseled dozens like Khokar and sheltered runaway brides.Many end up isolated in remote parts of China, dependent on translation apps and abused and pressured into having babies, which Iqbal and Khokar said they suspected would be trafficked.“All that my husband wanted was to get me pregnant. He said then he would send me back,” Khokar said.
Some women narrate horrific accounts of being tortured, beaten and forced into prostitution, Iqbal said.
“The more you probe, the more terrible tales, lies and deceit you will hear,” he said, adding that he became aware of the trafficking operation in October and reported it to the Federal Investigation Agency (FIA).
On Monday, the FIA announced that it had arrested 12 suspected members of a prostitution ring trafficking young Pakistani women to China.
The government did not intervene until it had “foolproof evidence”, said Ejaz Alam Augustine, Pakistan’s minister of human rights and minorities affairs.
“Once we had spoken to the victims who pointed us to the gang involved in this, we asked the FIA to intervene,” he said.
SEXUAL SLAVERY
Since Monday, the FIA has cracked down on scores of similar operations, arresting numerous Chinese nationals, brokers and pastors in four cities across Punjab, said Jamil Ahmed Khan Mayo, head of the investigation.
“We are interrogating more people and soon there will be more arrests,” he said.
The arrests came a week after Human Rights Watch said Pakistan should be alarmed by recent reports of trafficking of women and girls into sexual slavery in China. It said the allegations were disturbingly similar to the pattern of trafficking of “brides” to China from Vietnam, Cambodia, Laos, Myanmar and North Korea.
Chinese men typically pay brokers between $10,000 and $20,000 for a foreign wife, a 2016 United Nations report said.Pakistan’s minister Augustine said that despite several letters to the Chinese embassy alerting them to bride trafficking, their authorities had done “absolutely nothing”.The Chinese embassy in Pakistan did not respond to the Thomson Reuters Foundation’s repeated requests for comment.
But not all Pakistani women who marry Chinese men under false pretences are unhappy.
One 27-year-old woman who declined to be named said she loves the Chinese man she married in September, even though he lied that he was a Christian.
“He really takes good care of me,” said the woman, who is expected to have a baby in August.
Khokar - now divorced and back to her old marketing job, earning 30,000 rupees a month - is simply glad to be home.
“Nothing like living and feeling safe in your own, clean home,” said Khokar, adding that she plans to bring her marriage broker and pastor to justice.
https://www.reuters.com/article/us-pakistan-women-trafficking/poor-pakistani-women-trafficked-as-brides-to-china-idUSKCN1SF2BN

Pakistan People’s Party (PPP) Chairman Bilawal Bhutto-Zardari on Thursday lashed out at the federal government for “compromising economic sovereignty” of Pakistan by caving into the demands of the International Monetary Fund (IMF).
“This government has no plan, no mission and no vision,” Bilawal said while addressing a session of the National Assembly, adding that the government had failed to meet its tax targets.Amid protesting noises by the treasury benches, the PPP chairman alleged that the public was “suffering due to the government’s incapability”. He repeated his warning that the opposition would not accept any deal with the International Monetary Fund (IMF) unless the government gets it approved by the House.Bilawal’s fiery speech comes a day after he made similar comments outside the NA, instead of during the session which was attended by Prime Minister Imran Khan. The opposition members on Wednesday seemed to have gone into hibernation for nearly an hour during the rare appearance of PM Khan in the assembly.
Bilawal once again questioned the sudden appointments of Hafeez Shaikh, Reza Baqir and Shabbar Zaidi as economic adviser, State Bank of Pakistan governor and Federal Board of Revenue chairman, respectively.
“The government is not telling us why it is doing what it is doing,” he lamented and repeated his suspicion that the country’s economic decisions were being “taken by the IMF”.
“This is not the PTI government any more. This is the PTIMF government,” Bilawal declared.
His comments drew the ire of the treasury benches, at which Bilawal said: “This government beats [the public] and doesn’t even let them cry”. He went on to tell the lawmakers that a protest against inflation was held in South Punjab but instead of heeding the grievances of the protesters, the “zaalim (cruel) government” had them arrested.
Speaker Asad Qaiser, however, had the word ‘zaalim’ expunged from the record. “Mr Speaker, you should not expunge the truth,” Bilawal responded. He claimed that the government had filed a first information report against a PPP member in South Waziristan and had withdrawn the security of Jamiat Ulema-e-Islam-Fazl (JUI-F) chief Maulana Fazlur Rehman.“What kind of ‘Naya Pakistan’ is this? What kind of munafiqat [hypocrisy] is this?” he asked. When Speaker Qaiser asked that the word “munafiqat” be also expunged, Bilawal pointed out that “munafiqat” was an Urdu word, and it was not non-parliamentary. He then clarified that he meant ‘hypocrisy’.Bilawal also responded to the protesting treasury members — despite Speaker Qaiser’s repeated instructions to address him only — and said: “Why don’t you understand that constructive criticism is in the government’s favour? Instead of censoring [criticism], lodging FIRs and sending to people to jail, [government should] watch, listen and learn.”
He said that the federal government had said that the country was bankrupt because of the 18th Amendment when in reality, the Centre was robbing money from all the provinces. He advised the government to “learn from Sindh” and said that the province had always met tax targets and generated revenue. Bilawal accused the government of committing “economic murder” of labourers, pensioners and youth. He said that the PPP government had sought an IMF package as well but passed on its economic benefit to the public by increasing salaries, pensions and creating more than six million jobs.
PTI’s firebrand MNA Murad Saeed gave an angry response to Bilawal’s speech, saying that the current government was “exposing [PPP’s] corruption”. He added that Bilawal knew nothing and is not credible enough to talk about Pakistan’s issues.
“He just waved a chit, claiming that he has become the chairperson of the PPP,” Saeed said. He raised questions over the Sindh government’s performance and asked Bilawal to pay attention to the recent death of nine-month-old Nashwa, who had allegedly died due to medical malpractice. Saeed also drew Bilawal’s attention to the alarming increase in the number of HIV cases in Larkana.
Meanwhile, opposition members gathered around the speaker’s dice in protest. Speaker Qaiser repeatedly asked opposition leaders to return to their benches and urged PML-N’s Khawaja Asif to address the Parliament but to no avail. The sitting was then adjourned for prayers.
Earlier in the day, Bilawal, accompanied by Syed Khursheed Shah and Naveed Qamar, met Pakistan Muslim League-Nawaz (PML-N) leaders Shahid Khaqan Abbasi, Ayaz Sadiq, Khawaja Asif, Saad Rafique and Marriyum Aurangzeb and discussed the current political situation with them.