Chelsea Clinton Takes Daughter Charlotte, 2, to Her ‘First Protest’ in Support of Muslims 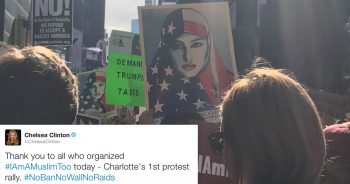 Among the protesters filling Time Square in New York City for the “Today, I Am a Muslim Too” event on Sunday was a first-time protester: Chelsea Clinton’s 2-year-old daughter, Charlotte.


The protest was organized in part by hip hop mogul Russell Simmons, who spoke to the crowd with an American flag backdrop.
“We are here today to show middle America our beautiful signs and, through our beautiful actions and intention, that they have been misled,” Simmons told the crowd on the warm February afternoon.
“We are here unified because of Donald Trump,” he said. “We want to thank him for bringing us together.”
Celebrities such as Susan Sarandon also participated in the event. 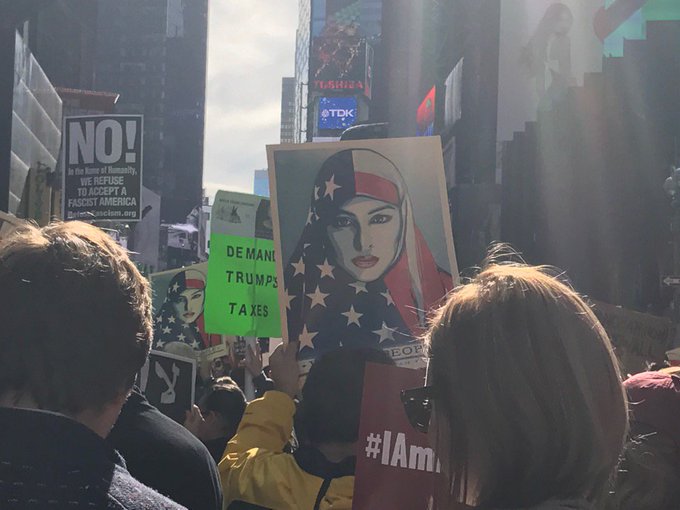 Chelsea, 36, also posted on Twitter early Sunday to join in the growing chorus of people who were mocking a false claim Trump made about an attack on Sweden during a rally in Florida on Saturday.


“What happened in Sweden Friday night? Did they catch the Bowling Green Massacre perpetrators?” Chelsea quipped on Twitter, referencing comments by Trump’s senior adviser, Kellyanne Conway, who described a supposed terrorist attack committed by two Iraqi refugees that never occurred.
Although no incident occurred in Sweden on Friday, Fox News host Tucker Carlson ran a segment interviewing a documentary filmmaker who claimed that crime increases in Sweden were linked to immigrants, many of whom are refugees.
No comments: 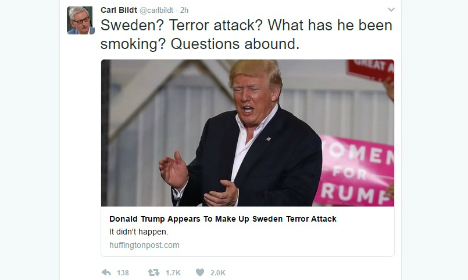 In a speech on Saturday, US President Donald Trump suggested that something had happened ‘last night in Sweden” – prompting baffled Swedes to take to Twitter and other social media wondering what on earth the American leader might have been referring to.
The Swedish twittersphere went nuts on Saturday, with #LastNightInSweden quickly becoming one of the most popular hashtags after Trump appeared to justify the controversial US travel ban targeting seven Muslim countries by claiming some sort of incident had happened in Sweden.
“When you look at what’s happening last night in Sweden – Sweden! Who would believe this? Sweden!,” the American leader told a Florida rally.
Only nothing had happened in Sweden.
While Sweden’s former prime minister Carl Bildt wondered what Trump might have been smoking, others asked whether he might have referred to a massive meatball theft, someone having opened a tin of fermented herring in public, or the fact that it had snowed overnight.
Others went on to crack jokes about the incident perhaps involving the traumatic experience of trying to assemble IKEA furniture.
The curator of Sweden’s official Twitter account @sweden – an account that is handed over to a regular Swede every week in a show of democracy – was kept busy reassuring people that all was fine in Sweden. In just four hours, more than 800 people had mentioned the @sweden handle, she said.
Several media outlets speculated Trump might have made the comment after Fox aired an interview with documentary film-maker Ami Horowitz on Friday and who claims Sweden is trying to cover up the problems linked to immigration.
If Trump referred to a supposed terror attack, the president and his entourage have now alleged three non-existent terror attacks since he took office. White House Press Secretary Sean Spicer has, on several occasions, spoken of an attack in Atlanta that never happened, while the president’s senior advisor Kellyanne Conway was mocked after referring to the Bowling Green massacre – which also never occurred.

By Nick Robins-Early President Donald Trump seemed to suggest to his supporters at a rally on Saturday that something horrible had happened the previous night in Sweden, when no such incident had occurred. “You look at what’s happening in Germany, you look at what’s happening last night in Sweden,” Trump told the crowd, after saying that “we need to keep our country safe.” He then listed a number of European cities where terror attacks have taken place. Swedish media, along with many online, mocked Trump’s misleading statement. Former Prime Minister Carl Bildt asked “What has he been smoking?” in a post on Twitter, while others ridiculed the speech using the hashtag “#LastNightInSweden.” But even before the president made a vague reference to an awful event in Sweden, the Nordic country had an avid dislike for Trump. A Pew Research Center survey released during the U.S. presidential election campaign last year showed that 92 percent of Swedes had little to no confidence in Trump to “do the right thing regarding world affairs,” a higher number than in any other nation polled. The June 2016 survey looked at attitudes toward the presidential candidates in 10 countries across Europe, as well as four Asia-Pacific nations and Canada. Although support for Trump was low across the board, Sweden edged out other countries, including the Netherlands and Germany, to hold the highest percentage of “no confidence” respondents. Pew’s poll doesn’t give a reason for why Swedes had such an unfavorable opinion of Trump’s world affairs acumen. Sweden does have a number of policies that are ideologically opposite to Trump’s, however, especially when it comes to refugees. Sweden took in almost 200,000 asylum seekers amid the mass migration of people to Europe from conflict zones such as Syria, including 163,000 refugee claimants in 2015 alone. The surge in migration led to Sweden putting in place stricter rules for asylum claims last year, and reluctantly giving up some of its status as one of the world’s most accepting nations for refugees. A common narrative among anti-refugee and right-wing groups is that Sweden’s acceptance of immigration has led to a surge in crimes, notably sexual assault. False stories of refugees committing rape have been circulated on social media and subsequently been debunked. Swedish criminologists have also disputed the link between immigration and sex crimes. Trump previously described Sweden’s experience with refugees in hyperbolic ways to make his case for temporarily banning Muslim immigrants from entering the United States. In an interview last May with ABC’s George Stephanopoulos, Trump used a line extremely similar to the one said during his Saturday night rally. “Look at what’s happening in Europe. Look what’s happening in Germany. Look at what’s happening to Sweden. They have a small section of Sweden which is beyond out of control, all right?” Trump told Stephanopoulos. In other instances, Trump has said it “wasn’t people from Sweden who blew up the World Trade Center.” Trump also claimed in his book The Art of the Deal that his grandfather was Swedish, but this was later proven to be untrue. The Trump administration put an incident in the city of Malmo, Sweden, on its list of terror attacks it said the media did not sufficiently report. The so-called attack was actually a minor case of arson at an Iraqi community center that authorities did not describe as terrorism. Earlier this month, however, Swedish police did arrest three neo-Nazis who were planning a bomb attack on an asylum center. UPDATE: Deputy White House Press Secretary Sarah Sanders told reporters on Sunday that Trump was “talking about rising crime and recent incidents in general, and not referring to a specific incident.” Sanders added that the president had been “referring to a report he had seen the previous night.” Trump himself weighed in shortly thereafter to clarify that he was indeed referring to the Fox News segment about immigration in Sweden:
No comments: 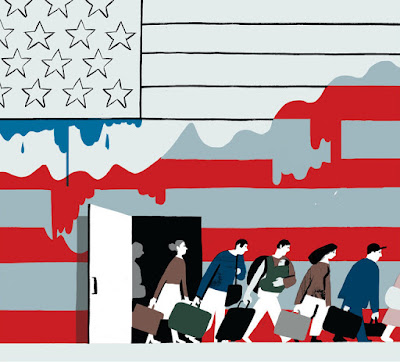