Video - Is it sexual harassment to stare at co-worker? Netflix apparently has the answer

Former first lady Michelle Obama neatly criticized the Trump administration’s child separation policy on Monday, breaking from the Obamas’ practice of (mostly) staying quiet about the current president.
“Sometimes truth transcends party,” she wrote, pointing to former first lady Laura Bush’s Washington Post op-ed in which Obama’s Republican predecessor criticized the practice of separating immigrant children from their undocumented parents at the border.
Former President Barack Obama retweeted his wife’s post shortly afterward.
Former first lady Hillary Clinton also backed up Bush’s criticisms against the Trump administration’s controversial immigration policy on Monday.
“What’s happening to families at the border right now is a humanitarian crisis,” Clinton said. “Every parent who has ever held a child in their arms, every human being with a sense of compassion and decency, should be outraged.”
Former first lady Rosalynn Carter spoke out as well, calling the practice “disgraceful” and “a shame to our country.”
Democrats and Republicans alike have voiced opposition to the child separation policy, which the Trump administration has defended as a method to crack down on illegal entry into the country.
“Americans pride ourselves on being a moral nation, on being the nation that sends humanitarian relief to places devastated by natural disasters or famine or war,” Bush wrote in her op-ed. “We pride ourselves on believing that people should be seen for the content of their character, not the color of their skin. We pride ourselves on acceptance. If we are truly that country, then it is our obligation to reunite these detained children with their parents — and to stop separating parents and children in the first place.
This article has been updated to include comments from Clinton and Carter.
https://www.huffingtonpost.com/entry/michelle-obama-laura-bush-child-separation-policy_us_5b27f121e4b0f9178a9fe449
No comments: Links to this post 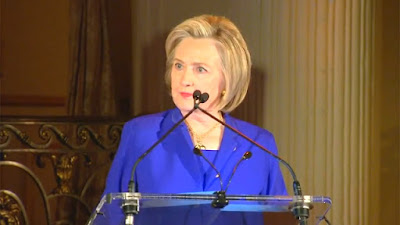 Former Secretary of State Hillary Clinton on Monday called Trump administration's "zero tolerance" policy that has separated children from their parents at the southern U.S. border "a moral and humanitarian crisis."
the
Speaking at an awards lunch for the Women's Forum of New York, Clinton said what was happening to families at the U.S.-Mexico border is "horrific."
"Every human being with a sense of compassion and decency should be outraged," Clinton said.
The separations stem from a policy that turns all cases of people trying to enter the country illegally over for criminal prosecution. Children are not detained with their parents when those parents are facing a criminal charge, as per U.S. protocol.
President Donald Trump has defended the policy, which has taken nearly 2,000 immigrant children away from their parents.
"The United States will not be a migrant camp and it will not be a refugee holding facility," he added. "Not on my watch," Trump said Monday.
Clinton, the 2016 Democratic presidential nominee, said she had warned during the campaign that Trump's hard-line immigration stance would result in family separations.
"Now as we watch with broken hearts, that's exactly what's happening," she said.


The policy has come under increasingly strong criticism, with accounts of children kept in cages and parents not knowing where their children are.
Trump has falsely blamed Democrats, and his administration has echoed his stance by claiming it was enforcing the law, with some using the Bible as religious justification.
Clinton pushed back on all of those points, saying the separations are required by no law and grounded in no religion.
"The test of any nation is how we treat the most vulnerable among us," she said. "We are a better country than one that tears families apart."

Laura Bush: Separating children from their parents at the border ‘breaks my heart’


Laura Bush is a former first lady of the United States.
On Sunday, a day we as a nation set aside to honor fathers and the bonds of family, I was among the millions of Americans who watched images of children who have been torn from their parents. In the six weeks between April 19 and May 31, the Department of Homeland Security has sent nearly 2,000 children to mass detention centers or foster care. More than 100 of these children are younger than 4 years old. The reason for these separations is a zero-tolerance policy for their parents, who are accused of illegally crossing our borders.
I live in a border state. I appreciate the need to enforce and protect our international boundaries, but this zero-tolerance policy is cruel. It is immoral. And it breaks my heart.
Our government should not be in the business of warehousing children in converted box stores or making plans to place them in tent cities in the desert outside of El Paso. These images are eerily reminiscent of the internment camps for U.S. citizens and noncitizens of Japanese descent during World War II, now considered to have been one of the most shameful episodes in U.S. history. We also know that this treatment inflicts trauma; those who have been interned have been twice as likely to suffer cardiovascular disease or die prematurely than those who were not interned.
Americans pride ourselves on being a moral nation, on being the nation that sends humanitarian relief to places devastated by natural disasters or famine or war. We pride ourselves on believing that people should be seen for the content of their character, not the color of their skin. We pride ourselves on acceptance. If we are truly that country, then it is our obligation to reunite these detained children with their parents — and to stop separating parents and children in the first place.


People on all sides agree that our immigration system isn’t working, but the injustice of zero tolerance is not the answer. I moved away from Washington almost a decade ago, but I know there are good people at all levels of government who can do better to fix this.
Recently, Colleen Kraft, who heads the American Academy of Pediatrics, visited a shelter run by the U.S. Office of Refugee Resettlement. She reported that while there were beds, toys, crayons, a playground and diaper changes, the people working at the shelter had been instructed not to pick up or touch the children to comfort them. Imagine not being able to pick up a child who is not yet out of diapers.
Twenty-nine years ago, my mother-in-law, Barbara Bush, visited Grandma’s House, a home for children with HIV/AIDS in Washington. Back then, at the height of the HIV/AIDS crisis, the disease was a death sentence, and most babies born with it were considered “untouchables.” During her visit, Barbara — who was the first lady at the time — picked up a fussy, dying baby named Donovan and snuggled him against her shoulder to soothe him. My mother-in-law never viewed her embrace of that fragile child as courageous. She simply saw it as the right thing to do in a world that can be arbitrary, unkind and even cruel. She, who after the death of her 3-year-old daughter knew what it was to lose a child, believed that every child is deserving of human kindness, compassion and love.
In 2018, can we not as a nation find a kinder, more compassionate and more moral answer to this current crisis? I, for one, believe we can.

U.S. - All 5 first ladies speak out against family-separation immigration policy

All five living first ladies have weighed in on the the Trump administration's immigration policy this week, an unusual move even as Melania Trump had her spokeswoman issue a statement on it.
The policy of separating children from their family members when they cross the border illegally has prompted debate in Washington, with many rights groups calling the practice inhumane.
The Trump administration has said it's simply enforcing a law to prosecute adults that come into the U.S. illegally and that children cannot be housed with adults while they are going through the criminal process.
A spokeswoman for First Lady Melania Trump said she "hates to see" families separated and called on both Democrats and Republicans to change immigration laws.
"Mrs. Trump hates to see children separated from their families and hopes both sides of the aisle can finally come together to achieve successful immigration reform," the first lady's spokeswoman, Stephanie Grisham, said in a statement. "She believes we need to be a country that follows all laws, but also a country that governs with heart."
Laura Bush wrote in an opinion piece for the Washington Post on Sunday that she understands the need to secure the borders but that the current situation reminds her of Japanese Internment Camps.
Michelle Obama retweeted Bush, adding that "sometimes truth transcends party."
Hillary Clinton also shared Bush's article and said there is no law to support the policy, tweeting that the situation is a "humanitarian crisis" and that parents should be "outraged."
Rosalynn Carter also weighed in, calling the policy a disgrace and that she has seen first hand the trauma of separating children from their parents.
No comments: Links to this post