Pakistan Peoples Party (PPP) Chairman Bilawal Bhutto Zardari has complained that the promises made by the Federal Government to Sindh have not been fulfilled while Khyber Pakhtunkhwa has also not received the required support.
Bilawal Bhutto, in his address to the National Assembly, said that we only do constructive criticism but Pakistan Tehreek-i-Insaf (PTI) representatives in Sindh are causing confusion with irresponsible statements. He said that if the federal government undermines all our efforts, then they will surely fail.
He demanded the support of the federation instead of political point scoring during the global crisis. He admitted that the provinces receive more resources after the 18th amendment but said that one year’s health budget is not enough for this countering this pandemic. He asked the federal government to help provinces during the crisis rather than abusing and mischaracterizing them.
Bilawal Bhutto said that uninterrupted supply of testing kits and safety equipment must be ensured. The federation was supposed to stand side by side in the national emergency but regrettably, that did not happen. He again requested for help from the federal government as it was the only option.
He said that the situation would have been different if all parties had focused on coronavirus instead of passing statements against each other. He added that a majority of the statements are against Murad Ali Shah. He said that the Prime Minister is not fulfilling his responsibility towards the country and even in this state of war, the Prime Minister is absent and confused.
http://dunyanews.tv/en/Pakistan/544960-Federal-governments-promises-Sindh-still-unfulfilled-Bilawal-Bhutto
No comments: 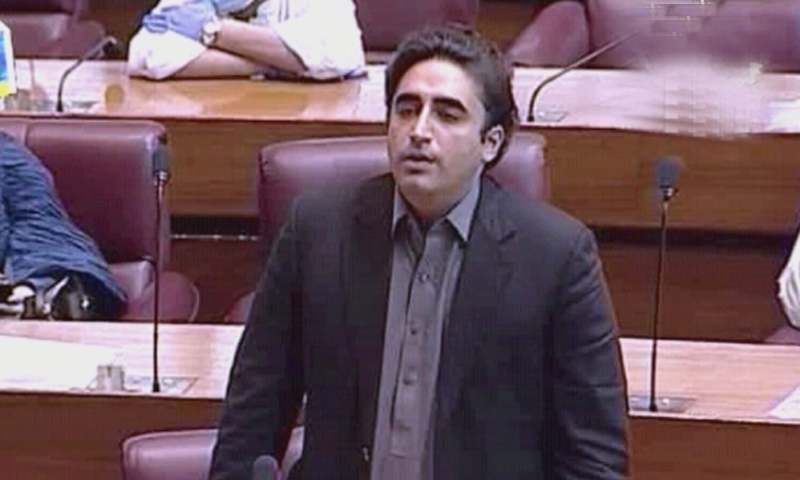 Chairman Pakistan Peoples Party Bilawal Bhutto Zardari has said that the provinces were fighting against the coronavirus with their available capacities but lamented that Federal government didn’t play its due role in a situation when entire country was at war against the pandemic. Addressing the National Assembly session especially convened after the COVID-19 attack, the PPP Chairman said that though it was a war but the Prime Imran Khan appears to have gone missing and it was regrettable that he was not fulfilling his responsibilities as the Prime Minister of Pakistan. Bilawal Bhutto Zardari pointed out that more than 700 frontline workers have been infected with the contagious virus so far while 11 health workers have embraced martyrdom fighting the disease. “World was saluting the doctors, nurses and the paramedics but Pakistan our heroes faced imprisonments and d torture for demanding Personal Protective Equipment (PPEs) to fight against coronavirus,” he added.

PPP Chairman pointed out that Federal government was making promises from the day one for relief to daily-wagers and labourers but it did nothing so far instead its representative Governor Sindh refused to sign an ordinance issued by Sindh government to provide relief in the backdrop of lockdown in a bid to sabotage the province’s efforts.He further said that whenever the nation needed unity in the face of economic crisis, Kashmir issue or now coronavirus, Imran Khan refused to play the role of a Prime Minister of Pakistan.
Bilawal Bhutto Zardari said that Federal government should contribute two rupees where provinces spend one rupee against coronavirus but it failed to take adequate steps. There were no kits available in Nishtar Hospital, Multan and PPP had to provide, he added.He said that unfortunately PTI leaders issued irresponsible statements and asked that Federal government should decide whether it was for a complete lockdown, a smart lockdown or for easing restrictions as you have to get ready for isolation and quarantine wards in the hospitals. But the government kept creating confusion, he regretted.Bilawal Bhutto Zardari further said that crisis befall as tests for the leadership adding that our Prime Minister, who is also Minister for Health Services should have been present in the session and it was his responsibility to apprise the masses and the House about threats by coronavirus and measures taken for its prevention and cure.
Though Foreign Minister tried to generate a debate on the Sindh province and 18th Amendment during the session, but PPP Chairman chose to limit his speech to the virus and steps required against it as from the first day he has has been emphasising for working together. However, he pointed out that our cooperation offer was responded with abusive language against our Party leaders and Chief Minister, Sindh and a campaign was carried out against their hardwork and efforts, One of their leader who is inducting as Governor even went on to allege that he was infected with coronavirus due to ignorant and illiterate people of Sindh. He again stressed that this was not the time for politics because country is faced with a very dangerous crisis. He appreciated the provinces for increasing their testing capacities but lamented that Federal government has not fulfilled its promise regarding provision of testing labs to the provinces so far.
Bilawal Bhutto Zardari further pointed out that Chairman NDMA himself had fixed the target of 50,000 COVID-19 tests per day but the target was not met.
PPP Chairman said that a Prime Minister cannot ask the provinces to fight on their own especially when we are at war or we cannot send our soldiers to a war without giving them protective and fighting equipment.He said that our economic conditions were weak before the coronaviris and our poor and working classes were already faced with difficulties while coronavirus have broken their back in entire Pakistan not only in any particular province.
Bilawal Bhutto Zardari offered to work with the Federal government during their international crisis affecting the Pakistan nation as well and asked Prime Minister to amend the batting order of his team and bring sober and graceful people to the fore by sidelining those spitting venom and resorting to abusive language when this country deserves unity.
https://www.ppp.org.pk/2020/05/11/offering-cooperation-bilawal-bhutto-zardari-tells-national-assembly-that-center-is-creating-confusion-continuously-amid-coronavirus-crisis-instead-of-fulfilling-responsibilities-while-pm-appears-to-h/
No comments: