Billionaire Warren Buffett urged U.S. lawmakers to raise taxes on the country's super-rich to help cut the budget deficit, saying such a move will not hurt investments.

"My friends and I have been coddled long enough by a billionaire-friendly Congress. It's time for our government to get serious about shared sacrifice," The 80-year-old "Oracle of Omaha" wrote in an opinion article in The New York Times.

Buffett, one of the world's richest men and chairman of conglomerate Berkshire Hathaway Inc , said his federal tax bill last year was $6,938,744.

"That sounds like a lot of money. But what I paid was only 17.4 percent of my taxable income - and that's actually a lower percentage than was paid by any of the other 20 people in our office. Their tax burdens ranged from 33 percent to 41 percent and averaged 36 percent," he said.

Lawmakers engaged in a partisan battle over spending and taxes for more than three months before agreeing on August 2 to raise the $14.3 trillion U.S. debt ceiling, avoiding a U.S. default.

"Americans are rapidly losing faith in the ability of Congress to deal with our country's fiscal problems. Only action that is immediate, real and very substantial will prevent that doubt from morphing into hopelessness," Buffett said.

Buffett said higher taxes for the rich will not discourage investment.

"I have worked with investors for 60 years and I have yet to see anyone - not even when capital gains rates were 39.9 percent in 1976-77 - shy away from a sensible investment because of the tax rate on the potential gain," he said

"People invest to make money, and potential taxes have never scared them off."
No comments: Links to this post

VOA.COM
Chinese military chief Chen Bingde is in Israel, becoming the most senior Chinese officer ever to visit the country.

Israel's defense ministry said the officials discussed relations with Pakistan, Iran and the Palestinian Authority, as well as the fight against global terrorism.

The visit repays a trip to China in June by Barak, who became the first Israeli defense minister to visit that country in a decade.

The Jerusalem Post quoted Israeli defense officials saying the visit does not signal any change in Israeli policy on defense exports to China. Israeli has backed out of two arms sales to China since 2000 because of U.S. pressure, and Israeli companies have been barred from selling weapons to the Chinese military.

However the Israelis were expected to bring up a United Nations report accusing China of supplying Iran with missile technology and components from North Korea.

Israel is also seeking to persuade other countries to vote against a bid by the Palestinians for recognition as a state at the U.N. General Assembly next month.

China's official Xinhua news agency said China and Israel will work together “to tackle all kinds of threats and challenges.” 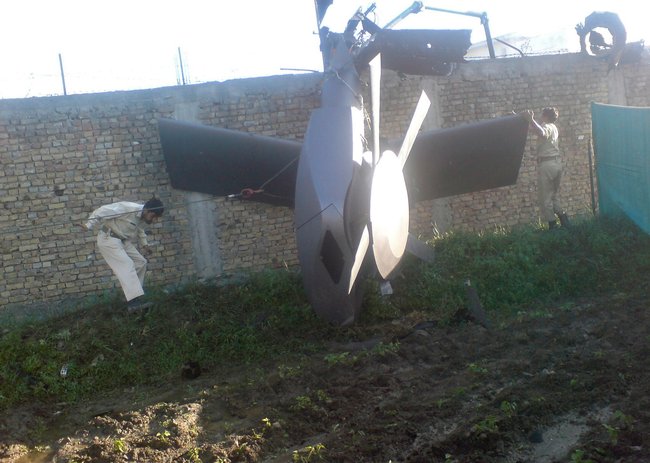 In the days after the raid that killed Osama bin Laden, Pakistan’s intelligence service probably allowed Chinese military engineers to examine the wreckage of a stealth American helicopter that crashed during the operation, according to American officials and others familiar with the classified intelligence assessments. Such cooperation with China would be provocative, providing further evidence of the depths of Pakistan’s anger over the Bin Laden raid, which was carried out without Pakistan’s approval. The operation, conducted in early May, also set off an escalating tit-for-tat scuffle between American and Pakistani spies.

American spy agencies have concluded that it is likely that Chinese engineers — at the invitation of Pakistani intelligence operatives — took detailed photographs of the severed tail of the Black Hawk helicopter equipped with classified technology designed to elude radar, the officials said. The members of the Navy Seals team who conducted the raid had tried to destroy the helicopter after it crashed at Bin Laden’s compound in Abbottabad, but the tail section of the aircraft remained largely intact.

One person with knowledge of the intelligence assessments said that the American case was based mostly on intercepted conversations in which Pakistani officials discussed inviting the Chinese to the crash site. He characterized intelligence officials as being “certain” that Chinese engineers were able to photograph the helicopter and even walk away with samples of the wreckage. The tail has been shipped back to the United States, according to American officials.

Pakistan has a close military relationship with China, and large numbers of Chinese engineers work at military bases inside Pakistan. Pakistani officials have even suggested that the Chinese Navy might eventually have its own base along Pakistan’s coastline.

When pictures of the helicopter’s tail emerged in the days after the Bin Laden raid, defense experts said it bore little resemblance to a standard Black Hawk helicopter. They said that the helicopter in Abbottabad appeared to have a special coating designed to elude air defenses, and that the Black Hawk’s sharp edges seemed to have been replaced with curved parts that could further confuse ground radar systems.

Pakistan’s anger about the Bin Laden operation was so intense that officials in Islamabad, the capital, hinted in news reports in May that they might allow the Chinese to see the helicopter wreckage, but it was unclear at the time whether Pakistan’s government might follow through on the veiled threats. Pakistani officials also made a high-profile trip to Beijing shortly after the Abbottabad raid, part of a not-so-subtle campaign to show the strength of Pakistan’s alliance with China amid faltering relations between Washington and Islamabad.

Meanwhile, the intelligence services of the two countries have quietly carried out their own spy games. Pakistan’s military spy service, the Directorate for Inter-Services Intelligence, or ISI, arrested a group of Pakistani citizens in May who the agency suspected were working with the Central Intelligence Agency in the months leading up to the Bin Laden raid.

One of those arrested was a Pakistani doctor who had helped the C.I.A. set up a phony vaccination program in Abbottabad. The doctor had set up the vaccination scheme in the hope of gaining access to the Bin Laden compound and getting hard evidence that Bin Laden was hiding there. The doctor remains in Pakistani custody, according to American officials.

The C.I.A., for its part, has continued to carry out missile strikes inside Pakistan using armed drone aircraft, a campaign that has been tacitly blessed by Pakistani leaders but that has further aggravated relations between the C.I.A. and the ISI.

The relationship between the spy services began fraying in the months before the Bin Laden raid, after a C.I.A. contractor was charged with murder and jailed in Lahore. The contractor, Raymond A. Davis, killed two men at a crowded traffic stop in Lahore in January, in what American officials described as an act of self-defense after the two men tried to rob Mr. Davis.

Mr. Davis was eventually released from jail, but American relations with Pakistan declined steadily in subsequent weeks and sank even lower after the Bin Laden raid.

However, amid the recriminations and threats by members of Congress to cut all military aid to Pakistan, some senior members of the Obama administration have tried to dial back tensions before they do permanent damage to the shaky alliance.

Despite the headaches of an alliance marked by mutual distrust and competing agendas, the officials argue, the prospect of Washington permanently severing ties with a nuclear-armed country as volatile as Pakistan would be far more dangerous.
No comments: Links to this post

EDITORIAL:
Daily Times
Pakistan celebrated its Independence Day yesterday. As is the norm, there were official ceremonies and colourful tributes were paid to our forefathers who struggled for an independent state. In 1947, Pakistan may have gotten its independence from the British Raj but 64 years later, with a moth-eaten country, we are still waiting for a new dawn. Every year, the people of Pakistan wait for some miraculous transformation of this country’s situation but with each passing day, things go from bad to worse. Once again Prime Minister Gilani reiterated Pakistan’s “unhindered moral, diplomatic and political support” to the Kashmiris for their rights but where is this ‘support’ for the people of Balochistan? Prime Minister Gilani might be “ready to go to all Baloch leaders” as the government wants “to bring them in the national mainstream” but on the day he delivered this address, and while the people of Pakistan were celebrating August 14, the people of Balochistan were mourning their dead after an explosion in Dera Allahyar killed more than a dozen and injured many others. In a separate incident, journalist Munir Shakir was gunned down in Khuzdar. No wonder the people of Balochistan want their right of self-determination in the face of state oppression. Pakistani leaders continue to talk about state oppression outside Pakistan, be it Kashmir or Palestine, but when it comes to their own people, our leaders are in a habit of sweeping everything under the rug.

How long will Pakistan continue to pursue policies that have not just hurt us but the outside world as well? Cross-border terrorism has resulted in Pakistan being treated like a pariah state by the whole world. Supporting jihadi networks has made this country into one of the most dangerous countries in the world. Bomb blasts, suicide attacks, sectarian violence, Baloch genocide, political warfare in Karachi are just the tip of the iceberg. Dependency on foreign aid and loans has pushed us into one of the worst economic crises ever. Inflation keeps rising and so does unemployment. The energy crisis has led to the shutdown of many businesses and also made the lives of our citizens miserable. Corruption, both in the military and the civilian set-up, continues unabated. The military still calls the shots when it comes to our foreign and security policies. Instead of protecting our borders, the military is far too busy meddling in other affairs of the state. Our children are being taught distorted history in schools, colleges and universities. Madrassas keep churning out religious zealots who wreak havoc in the name of religion. The majority cannot even afford to send their children to schools, which is why child labour is still rampant. In his August 14 address, President Zardari said, “Youth is the real future of the country and they are the hope for the progress and prosperity of the country.” If the government is really serious about bringing progress and prosperity in Pakistan, it must do so by investing more time and money to improve the education system. We must also protect the rights of our minorities who are treated like second class citizens in their own homeland. For this, the government needs to repeal draconian laws promulgated by General Ziaul Haq. Crimes against women must also be stopped. A society cannot progress unless and until women are treated equally. Our justice system needs to be revamped in order to bring speedy justice to perpetrators of terror and other heinous crimes.

Only a secular, tolerant, educated, egalitarian and just Pakistan can survive. Continuing with the same old policies of abetting religious extremism, terrorism and intolerance will lead to anarchy and self-destruction.
No comments: Links to this post

Former Punjab governor Salmaan Taseer, who served as governor from May 15, 2008 to January 4, 2011, was awarded with the Nishan-e-Imtiaz by President Asif Ali Zardari for his services to the country.

The former governor was assassinated in Islamabad by his own security guard, who disagreed with Taseer’s views about Pakistan’s blasphemy laws. On January 4 one of Taseer’s bodyguards, Malik Mumtaz Qadri, shot him 26 times at Kohsar Market, Islamabad, as he was returning to his car after having lunch with a friend in a restaurant in the market.
No comments: Links to this post