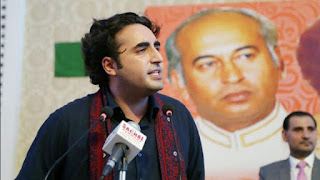 Pakistan People’s Party (PPP) Chairman Bilawal Bhutto Zardari will address a public meeting in Kandhkot on Saturday (today), a private source reported.
The party organizers have finalized arrangements for the PPP public rally in Kandhkot in upper Sindh.
The local administration has stepped up security in the city ahead of the power show of the People’s Party.Bilawal Bhutto will proceed to Islamabad on the next day to visit his ailing father Asif Ali Zardari at the Pakistan Institute of Medical Sciences (PIMS) on Monday.The PPP chairman will hold meetings with party workers in Kandhkot on Sunday to discuss local and party issues, sources said.
The PPP chairman is expected to fly back to Karachi after meeting Zardari.
Bilawal Bhutto Zardari has not yet decided on attending the Azadi March though he has directed the party members of the opposition Rahber Committee to welcome the march participants in Islamabad.
According to sources, so far no formal invitation from the JUI-F chief Fazlur Rehman has been received by Bilawal to address the Azadi March.
His scheduled public rallies in South Punjab will start from Rahim Yar Khan from November 1 followed by in different cities of South Punjab.