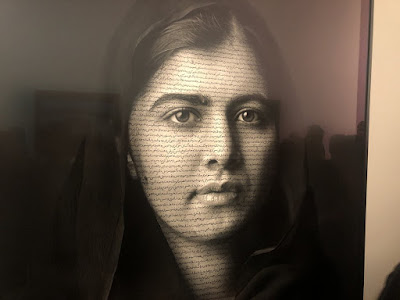 Yousafzai shared the portrait of Malala and apprised that the portrait was made by Neshat and was unveiled at National Portrait Gallery in London.
“We are grateful to the artist for creating this wonderful piece of art depicting strength, resilience, and courage,” he further added. 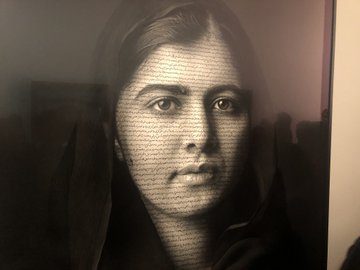 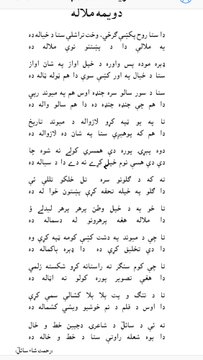 Ziauddin Yousafzai ✔@ZiauddinY
Portrait of @Malala by Shirin Nishat unveiled at @NPGLondon.The poem inscribed on the portrait is written by the great Pushto poet Rahmat Shah Sayel.We are grateful to the artist for creating this wonderful piece of art depicting strength,resilience&courage.


Malala is currently studying at Oxford University and is an advocate for girls’ education.
No comments: Links to this post

MEDIA freedom is at its lowest point when journalists are forced to operate in an increasingly hostile environment.
While in Pakistan, there are no official curbs at the moment, as they were in the days of Gen Ziaul Haq, there is increasing pressure on media houses to conform to the narrative spun by various state institutions.
It is this rapid deterioration of press freedom that has prompted the main faction of the Pakistan Federal Union of Journalists to call for a nationwide protest on Oct 9.
While the PFUJ has stated its protest will form the bedrock for a sustained press freedom campaign, it is imperative all factions of this organisation unite to lend it unequivocal support.
Only collaboration among various media platforms — the CPNE, APNS and PBA included — and concerted advocacy with rights groups, media house editors and owners can highlight the seriousness of efforts to safeguard journalists’ constitutional rights.
The relentless pressure on journalists is such that self-censorship is now the new normal. In a report by the Committee to Protect Journalists, editors say this self-censorship is the result of direct and indirect ‘methods’.
What is unfortunate is that polarisation within the media has also eroded press freedoms. Journalists say the principle threat to their safety has come from the establishment — especially during civil-military tensions, with the media struggling to report both sides. Resultantly, dissenting views have been purged with authoritarian vigour, newspaper sales restricted and television broadcasts blocked. Journalists crossing ‘red lines’ by reporting on sensitive subjects (the military, religion, militancy, the courts etc) often pay the price.
Though few journalists and editors have spoken publicly about these unofficial curbs imposed by the government, the military and some militant groups, there is widespread awareness of the established lines of control. The PTI government must recognise that restrictions on freedom of expression and information under the pretext of ‘national security interest’ have detrimental consequences.
Also, impunity for aggressors creating a coercive environment curtails the right to information. When the job of a journalist is to speak truth to power, how will the government ensure that the media is able to report without fear or favour? For is it not an established fact that the relationship between a free media and state institutions in a democracy is often adversarial because the press as the fourth pillar of state has the responsibility of a watchdog?
Indeed, without independent journalism, democracy can have little chance of survival.

Pakistan has slashed China's investment in its railways by as much as $2 billion citing a massive burden of loans. By doing so, Islamabad has given credence to reports that the new government led by Imran Khan may scrutinise the multi-billion dollar corridor it calls 'CPEC' or 'China-Pakistan Economic Corridor'.Pakistan's railways minister Sheikh Rasheed Ahmad said that the share of the 'China-Pakistan Economic Corridor' in the country's railways has been reduced from $8.2 billion to $6.2 billion.
"Pakistan is a poor country that cannot afford huge burden of the loans," Mr Rasheed told reporters in Lahore.
"Therefore, we have reduced the loan from China under the CPEC for rail projects from USD 8.2 billion to USD 6.2 billion. The CPEC is like the backbone for Pakistan, but our eyes and ears are open," he said about the corridor that passes through Pakistan-occupied Kashmir or PoK. The announcement gives credence to reports that the new government led by Imran Khan intends to scrutinise the $62 billion infrastructure and power projects, which the previous Nawaz Sharif-led government had initiated under the 'CPEC'.
Pakistani newspaper Express Tribune reported that investment under 'CPEC' for Pakistan Railways was USD 8.2 billion, which was to be utilised for upgrading Main Line-1 (ML-1) a colonial-era line stretching 1,872 km from Karachi to Peshawar.
The previous railways minister Saad Rafique had termed the upgrading of ML-1 as vital for railways future as it would bring as many as 171 trains on track per day against the current 32.
Mr Rasheed, who currently heads the ministry, said that the government remains committed to the Karachi-Peshawar project but he would like to further reduce the cost to $4.2 billion from $6.2 billion, if possible.
Mr Rasheed said he is the biggest supporter of the 'CPEC', but also wants minimum debt burden on railways as the nation has to pay back all the investments.
He, however, was unable to explain, which projects the management has skipped to bring down the investment.
The changes are part of Islamabad's efforts to rethink the key Belt and Road Initiative (BRI) projects in Pakistan, where Beijing has pledged about $62 billion in financing, but the new government is more cautious about the Chinese investment.
The Pakistani government has pushed for deeply concessional loans for the ML-1 project. It has also invited third countries to join or for the Chinese to be investors in the project through the build-operate-transfer model that would rely less on debt. The US has criticised projects under Xi Jinping's 'Belt and Road Initiative', warning that Chinese loans could turn into debt traps for poor countries unable to pay them back. Beijing denies these claims, saying the loans are a win-win situation for both the countries. However, such loans have backfired for other countries, most recent of which is the Hambantota Port in Sri Lanka.
The so-called 'CPEC' is the flagship project of the multi-billion dollar Belt and Road Initiative, a pet project of Chinese President Xi Jinping, aimed at enhancing Beijing's influence around the world through China-funded infrastructure projects.
India has protested to China over the so-called 'China-Pakistan Economic Corridor', which is being built through Pakistan-occupied Kashmir, which is part of India's northernmost state Jammu and Kashmir.

Chairman Pakistan Peoples Party Bilawal Bhutto Zardari has expressed deep grief and sorrow over the catastrophic human losses in twin disasters, a major earthquake and tsunami which devastated city of Palu, in the Indonesian island of Sulawesi last week.

In a statement, the PPP Chairman expressed solidarity and sympathies with hundreds of families who lost their near and dear ones in the massive devastations. “Hearts of Pakistanis go out to the people of Indonesia and we feel equal agony and pain they are experiencing in the aftermath of the natural calamity,” he added.

Bilawal Bhutto Zardari said that international community needs measures to improve early warning systems to protect the coastal areas from such tsunami disasters in the future.