National Coun­ter Terrorism Authority (Nacta) chief Dr Suleman Ahmad on Saturday informed the Election Commission of Pakistan (ECP) that there were serious security threats to political leaders and electoral candidates and revealed that the leaders of almost all major political parties faced the risk of being attacked.

Briefing the ECP about security threats to the political leadership and candidates and the overall security situation across the country, he said suicide bombers and improvised explosive devices (IEDs) might be used by terrorists, informed sources told Dawn.
The briefing took place days after a senior official named six politicians under threat, followed by three back-to-back terrorist attacks in four days — two in Khyber Pakhtunkhwa and one in Balochistan. What surprised many was the fact that the name of former KP chief minister Akram Durrani (of the Jamiat Ulema-i-Islam-Fazl), who survived an attack on his convoy on Friday, had been on the list of leaders under threat. Nacta had also issued a specific terror alert.
Election commission says poll process will continue
The other leaders under threat include Pak­istan Tehreek-i-Insaf chairman Imran Khan, Awami National Party leaders Asfandyar Wali Khan and Ameer Haider Hoti, Qaumi Watan Party head Aftab Sherpao and banned outfit Jamaatud Dawa (Jud) chief Hafiz Saeed’s son Talha Saeed. Separately, the Senate’s standing committee on interior affairs had also been told that the senior leadership of the Pakistan Peoples Party and the Pakistan Muslim League-Nawaz was also under threat.
The briefing session was held in the chambers of Chief Election Commissioner Justice retired Sardar Muhammad Raza and was attended by other members and senior officials of the commission. The national coordinator of Nacta also explained how the authority gathered information on threats and the mechanism to promptly disseminate the information to the federal and provincial governments and law enforcement agencies.
The ECP vowed to hold elections on time and declared that the electoral process will continue despite terror threats. It made it clear that it would neither let the polls be delayed, nor would brook any hindrance in its way.
The ECP underlined the need to tighten security across the country and create a peaceful environment for the elections. He said the provincial governments must act swiftly to provide security to political leaders and candidates. It directed the provincial governments to review the security situation in coordination with relevant institutions to obviate the recurrence of terrorist incidents in future.
It also advised political parties and candidates to cooperate with the administration and timely share information about their activities in the interest of their own security.
A senior ECP official told Dawn that based on past experiences the ECP had already been taking up the issue of security at the highest level. He referred to a meeting held early last month where the ECP’s secretary had given a briefing at a meeting held with caretaker Prime Minister Nasirul Mulk in the chair, which was also attended by all four chief ministers, chief secretaries and inspectors general of police. 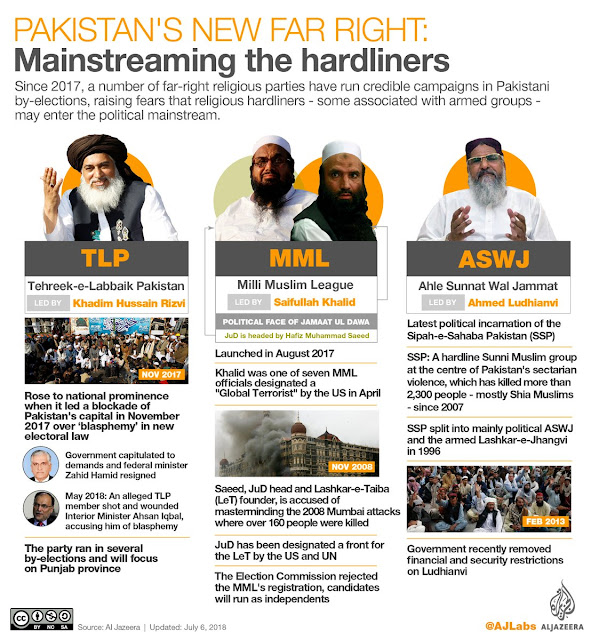 Candidates of banned organisations and people on the Fourth Schedule List who have been allowed to contest elections.
The removal of Maulana Muhammad Ahmed Ludhianvi from the Fourth Schedule list, ECP’s green signal to Hafiz Saeed’s son and son-in-law and Maulana Azam Tariq and Haq Nawaz Jhangvi’s sons to contest in the July 25 elections are points of concern for those who believe Pakistan is going to face tough time ahead after the Financial Action TaskForce (FATF) placed the country on the Grey List.
Religious parties have fielded a record number of candidates for the National Assembly as well as the provincial assemblies’ elections. These include Hafiz Saeed’s son and son in law, Hafiz Talha (NA-91) and Khalid Waleed (PP-167) respectively, from the platform of Allah O Akbar Tehreek, backed by banned Jamaat-ud Dawa’s political wing Milli Muslim League.
Hafiz Saeed’s Jamaat-ud-Dawa and Lashkar-e-Taiba have been designated as terrorist organisations under the UN Security Council resolutions 1267 and 1373. However, the Milli Muslim League (MML) does not fall under the resolution because the US Treasury and not the UN have labelled it as a terrorist group.
“We have observed terrorism suspects participating in elections in the past as well,” says senior journalist Mubasher Bukhari. “Former head of Sipah-e-Sahaba, Maulana Azam Tariq, was permitted by the court to take part in the 2002 elections from Jhang, even though he was behind the bars. Chaudhry Abid Raza Gujjar became PML-N MNA from Gujrat in 2013 while he was convicted by the Anti-Terrorist Court under section 302 and his name was in the Fourth Schedule list”.
He adds that the arrest of Hafiz Muhammad Saeed is one of the foremost demands of FATF. “Yet, he was released from house arrest last year. This could mean trouble for the country.”
“The criticism is unwarranted and dishonest as every citizen of Pakistan has the right to contest elections,” says Ahmad Nadeem Awan, spokesperson Jamaat-ud Dawa. “The law of the land is supreme and sacred for us. We don’t care about international community’s biased resolutions against us.”
“Agreed, every citizen has the right to take part in elections. But the JuD curses the constitution and democracy,” says analyst Wajahat Masood. “The inclusion of members of these banned parties will mar the democratic process in the country.”
Awan says the courts have dismissed accusations against Hafiz Saeed six times and set him free from house arrest as a “respected citizen” last year.
Although Ahle Sunnat Wal Jamaat’s (ASWJ) Muhammad Ahmed Ludhianvi is not a declared global terrorist, he was on the Fourth Schedule list with suspected ties with terrorism. ASWJ was banned in 2012 by the PPP government. This election he is contesting as an independent candidate from NA-115 Jhang 2.
A member of ASWJ, Masroor Nawaz Jhangvi, son of Haq Nawaz Jhangvi who is the founder of Sipah-e-Sahaba, is participating in the elections as an independent candidate. He is being challenged by Maulana Muavia, the son of Mualana Azam Tariq, former leader of Sipah-e-Sahaba in PP-126.
Both Ludhianvi and Masroor Jhangvi were disqualified by the Lahore High Court in 2016 and 2018 respectively. Ludhianvi was declared to be untruthful under the article 62 and 63 of the constitution and Masroor Jhangvi was on the Fourth Schedule list. The ECP has allowed them to contest the polls.
The fourth schedule is a section of Anti-Terrorism Act 1997 (ATA). Under the section 11EE (Proscription of Person) of ATA, the federal government may list someone who is suspected of terrorism or has rapport with any terrorist organisation and keep him under surveillance.
“The government has omitted Fourth Schedule section from the nomination form (i) which was obligatory in nomination forms of 2008 and 2013 general elections which is why Jhangvi and Abid Raza were disqualified even after being elected,” former secretary Supreme Court Bar Aftab Bajwa says. “Article 5 of the Constitution delineates that suspected or convicted terrorists cannot be loyal to the state. Articles 62 and 63 are clear on this issue as well. Therefore, when anyone is enlisted in the Fourth Schedule list and his movement gets circumscribed cannot be a public representative. Election Commission should also be held answerable for accepting nomination papers of such candidates”.
Former secretary ECP Kunwar Dilshaad says that the commission doesn’t have the independent authority to disallow a candidate from contesting elections. “It can only do so after consulting the interior ministry. The ministry sometimes shares names of suspects or convicted criminals before the commencement of the electoral procedure. Declining the registration of Milli Muslim League is an example.”

It’s Not Just the U.S. with a Gerrymandering Problem — Look at Pakistan


In one Pakistani province, it took just 544 voters to choose a chief minister. But 80,000 minorities there may not get a single representative. 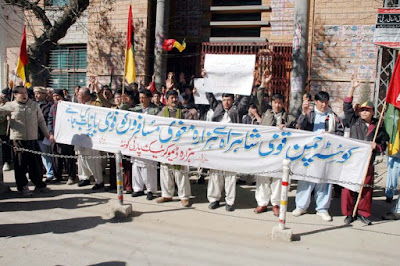 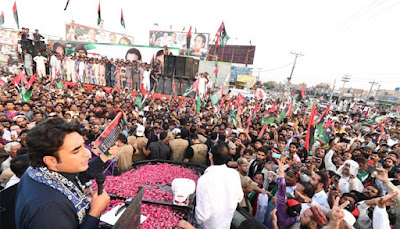 Pakistan Peoples’ Party (PPP) chairman Bilawal Bhutto Zardari has said that election should be held as per schedule as any delay will be detrimental to the interest of the country. He said that his party was being subjected to discriminatory treatment ahead of election adding restrictions on his party were encouraging the workers more to counter such nefarious designs. He said this while addressing a press conference here onSunday, from where he is contesting.
He said that terrorists do not want democracy and elections adding that despite terrorism elections can be held in Iraq and Afghanistan so why not in Pakistan. Bilawal said our workers and candidates are being threatenedbut free and fair election are our right. He lamented that his party is facing difficulties while campaigning across the country. He alleged that local administrations aretreating PPP differently than other political parties. He said that PPP wouldtake the matter to the Election Commission of Pakistan in this regard.
Referring to Pakistan Tehreek-e-Insaf Chairman Imran Khan”sspeech using derogatory words for supporters of other political parties, Bilawaltermed it outrageous and said that using of such words damage the society.
Responding a query, Bilawal Bhutto said that the NationalAction Plan is not fully implemented.
Bilawal said that we have to focus on basic issues like gas,health, education and water and vowed to resolve the problems of masses and torise on national level.
Bilawal said despite cancelling his public gathering here in light of the Mastung blast, he has come to Malakand to meet the people.
He said that he will soon go to Quetta to express solidarity with families of the Mastung blast victims.
http://www.thesindhtimes.com/pak/07/bilawal-bhutto-warns-delay-elections/