The advent of Ramazan has over the years become so closely associated with price hike as to be considered synonymous. The fasting causes a huge gap in demand and supply of edible items leading to an abnormal price hike. Governments have been providing some relief by underwriting subsidies. The pressure on prices with the inception of Ramazan is unlikely to be any different this year. The inflation is already being reported at 7.9 per cent and a substantial raised in prices of petroleum products just four days ahead of the fasting month will likely compound the problems for the consumers. The government’s response is not vastly different from its predecessors: the Utility Stores Corporation will provide 19 essential commodities at subsidized rates. The government of the Punjab has also decided to follow the USC subsidy model, without disclosing the amount to be provided for the subsidy. The Economic Coordination Committee has approved a Rs 200 million Ramazan Relief Package, 2019, compared to Rs 1.73 billion given in 2018. The substantial cut in the relief package speaks for itself. A report in the media says subsidy will be limited to only 10 items. The remaining 9 items on the list will just be sold at wholesale rates. Subsidized Ramazan Bazaars have been very popular with the citizens. In a certain sense they speak of a weakness in its price control regime. In broad terms, the subsidies lower consumer prices, help manufacturers maintain their profits and sustain a service. To some extent, such subsidies can be justified in terms of correcting for externalities and protecting struggling sectors. For multiple reasons, Ramazan subsidies meant to benefit the poor, often fail in achieving the objective. First, USC outlets and Ramazan bazaars are set up mostly in urban centers. Second, the subsidized bazaars do not discriminate against the affluent. It has been argued that the best way to support the targeted segment of the population is direct income support. The Benazir Income Support Programme is a model in this respect. A worthy goal may be to maintain an effective price control mechanism throughout the year. As Ramazan creates a temporary imbalance in demand and supply, the government might make special arrangements ahead of the month to ensure that supplies in the market remain adequate. Good planning in consultation with farmers, market players, and retailers can ensure that the month of fasting does not become a month of extra hardship. https://dailytimes.com.pk/389111/ramazan-and-the-dreaded-price-hike/
No comments: Links to this post

Opposition parties in the National Assembly on Monday strongly protested over poor economic situation of the country and recent hike in the petroleum prices, compelling Speaker Asad Qaiser to adjourn the session till Wednesday. 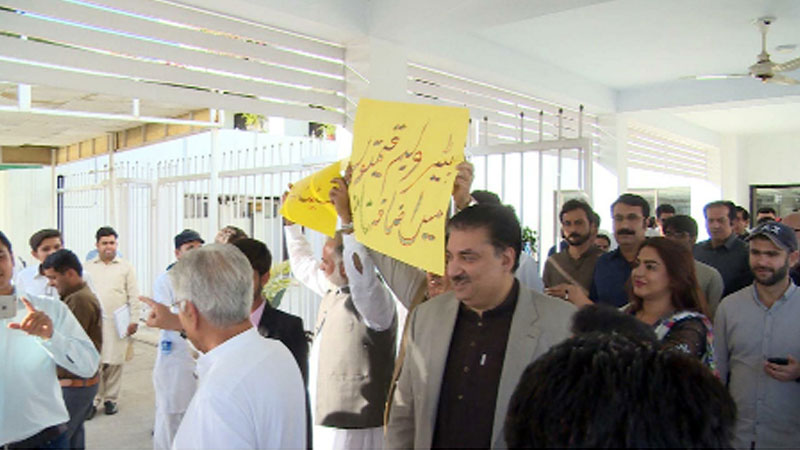 As the session began, the Pakistan Muslim League-Nawaz (PML-N) started protest against the Pakistan Tehreek-e-Insaf (PTI) government over inflation, increase in the prices of petroleum products and what they said toeing the line of the International Monetary Fund (IMF). The opposition lawmakers raised slogans against the government. They were also carrying placards inscribed with different slogans such as: ‘Increase in petroleum products unacceptable’; Stop economic murder of people’; ‘IMF policy is unacceptable’.
The opposition members wanted the floor to speak but the speaker gave floor to Minister of State for Revenue Hammad Azhar for responding to a calling attention notice. After it, the opposition members gathered in front of the speaker’s dais and started sloganeering.
Amid pandemonium in the House, Minister of State for Revenue Hammad Azhar said the previous governments approached the IMF for 21 times. He said in their tenures, the price of one litre of petrol had also reached Rs 113 per liter.
The opposition continued protest during the speech of the minister. The speaker tried to calm down the situation but failed. Later, he adjourned the House till 11:00am Wednesday.
Moreover, the opposition has submitted a ‘notice inviting attention’ in National Assembly Secretariat raising the issue of recent hike in petroleum prices announced by the government. The motion signed by key PML-N and PPP parliamentarians demanded an urgent debate in the House over hike in petroleum prices. The notice was signed by PML-N parliamentary leader Khawaja Asif, former prime minister Shahid Khaqan Abbasi, Ahsan Iqbal, Marriyum Aurangzeb and PPP’s Shazia Marri. The notice has been submitted to secretary of the National Assembly under Rule-88 of the House.
Meanwhile, the House was informed that no lawsuit has been filed against National Accountability Bureau (NAB) in the International Court of Arbitration. Parliamentary Secretary for Law and Justice Malika Ali Bukhari told the House during question hour that an arbitration titled as Broadsheet LLC Vs Government of Pakistan (through NAB) is pending in Chartered Institute of Arbitration, London and High Court Justice in England. The subject arbitration is sub-judice before the tribunal and the High Court of Justice in England and prohibited from public discussions.
Minister for Power Omar Ayub Khan told the House that an abundant supply of transformers is available at all sub-offices of power distribution companies and that their use will also be monitored. He said the last government gave power connections on political basis, resulting in an increase of Rs 450 billion in circular debt.The minister said master trainers have been given training on safety aspects. Linemen and other technical staff have been provided helmets, gloves and other safety equipment. He said bucket vehicles are available at all offices. He said heirs of the deceased linemen have also been distributed compensation cheques.
https://dailytimes.com.pk/389690/opp-in-na-protests-pol-price-hike-inflation-poor-economic-situation/
No comments: Links to this post

Pakistani authorities have arrested 12 suspected members of a prostitution ring taking young Pakistani women to China, part of a growing human trafficking problem often based on fake marriages, officials said Monday.
Those arrested included eight Chinese nationals and four Pakistanis, said Jameel Ahmad, a top official at Pakistan’s Federal Investigation Agency (FIA), which deals with human trafficking.
“We busted the gang after the FIA received information about increasing smuggling of Pakistani woman to China, where they are thrown into prostitution,” Ahmad told Reuters.
He said several gangs were believed to be operating, mainly targeting members of Pakistan’s Christian minority.
The arrests came a week after Human Rights Watch said Pakistan should be alarmed by recent reports of trafficking of women and girls to China. It said the allegations were disturbingly similar to the pattern of trafficking of “brides” to China from at least five other Asian countries.
The Chinese embassy in Islamabad has also raised the alarm over illegal, cross-border matchmaking services that are often a front for human trafficking. Last month the embassy said China was cooperating with Pakistani law enforcement agencies to crack down on illegal matchmaking. It denied reports that the women were being trafficked for the sale of their organs as “misleading and groundless.”
Ahmad said a police raid he led on a wedding ceremony last week in the eastern city of Faisalabad was a major breakthrough in the investigation.
He said a man and a woman from China and a fake priest were arrested at the ceremony, where a Christian girl was to be married.
“The gang members confessed that they have sent at least 36 Pakistani girls to China, where they are being used for prostitution,” he said. The majority were Christians from different districts in eastern Punjab province, he said.
https://nypost.com/2019/05/06/pakistan-busts-prostitution-ring-that-sent-young-women-to-china/
No comments: Links to this post 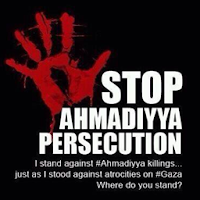 Pakistan’s Ahmadi community faces growing institutionalized discrimination fanned by last year’s election campaign by Prime Minister Imran Khan, the minority movement said in a report issued on Monday.Ahmadis, a group that originated in British-controlled India in the 19th century who see themselves as an Islamic movement, are regarded as heretical by orthodox Muslims and forbidden from calling themselves Muslims or using Islamic symbols in their religious practices.They face discrimination and violence over accusations their faith insults Islam and community leaders say legislative moves in 2018 and anti-Ahmadi rhetoric during the elections have entrenched legalized hate.
“Ahmadis have no religious freedoms in Pakistan and recent actions taken by the authorities mean that the situation is going to deteriorate even further and make it impossible for Ahmadis to carry on with their everyday lives,” spokesman Saleem ud Din said in a statement.Religious discrimination has long been a problem in Pakistan, a mainly Sunni Muslim state of more than 200 million people, with attacks against Shi’ites, Christians, Hindus and Sikhs in recent years.Ahmadis have faced particular pressure since a 1974 constitutional amendment which declared them non-Muslim and a ruling a decade later by military ruler General Zia ul Haq explicitly forbidding them from calling themselves Muslim.
Two major events underlined in the report are a High Court verdict requiring citizens to declare their religion when applying for identity documents, which rights activists said specifically targeted the Ahmadi community.
The other was electioneering by Pakistan’s main parties, including the prime minister’s party, in which they have supported religious laws and anti-Ahmadi groups to curry favor with the religious right.The Ahmadi community, in a statement on the report, accused Khan of fanning “the flames of religious hatred against Ahmadis”.
Khan’s office did not respond to request for comment.
The Ahmadis consider themselves Muslims. But their recognition of Mirza Ghulam Ahmad, who founded the sect in 1889, as a “subordinate prophet” is viewed by many Sunnis as a breach of the Islamic tenet that the Prophet Mohammad was God’s last direct messenger.The report said 62 Ahmadis were booked under discriminatory religious laws in 2017 and that more than 2,500 anti-Ahmadi news items appeared in Pakistan’s Urdu-language newspapers.In May, a mob attacked a 100-year-old Ahmadi mosque in eastern Pakistan, spurred by the words of a cleric.
“It is not just extremists who carry out hate campaigns against Ahmadis, but the political class also fans these flames too,” Din added.