Hate and violent campaign is continuing against Shia community from Takfiri Deoandi network without any hurdle despite big claims of wiping out menace of terrorism made by Punjab government like federal and other provincial governments in Pakistan. 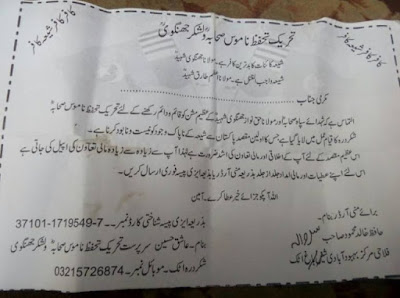 (So called) Tehreek-i-Namos-i-Sahabah wa Lashkar-i-Jhangvi( Movement for Protection of Companions of Prophet PBUH and Army of Jhangvi) has distributed a pamphlet in Attock district of Punjab. In this pamphlet funds appeal was made for the organization working for wiping out of shias of Pakistan. According to this pamphlet, founding father of organization Sipah Sahabah Pakistan-SSP/ Ahle-e-Sunnat-wa-Jamat-ASWJ( a Takfiri Deobandi terrorist organization is banned but only in papers) Haqnawaz Jhangvi’s view was that Shia are worst apostates of this universe and third head of this organizations Azam Tariq had asked to kill all Shias and their killing is obligatory for every Muslim. This pamphlet was distributed in the area of Shakardra Attock district of Punjab having address to send donations through Money Order and also having National Identity Card number along with mobile number require for sending donation through Easy Paisa.
Distribution of this hatred pamphlet against Shia community in the area of district of Punjab once again proves that Punjab government led by PML-N has no objection on distribution of such hatred pamphlets against Shia community and has no problem with proliferation of Takfiri ideas by Takfirist networks emerged from Deobandi Sect. Takfiri Deobandi can distribute pamphlets and make fund appeals for strengthening themselves to run slow genocide campaign of Shia community in Pakistan.
ASWJ despite being banned is functional fully all over the country and has been registered in the Election Commission of Pakistan under new name Pakistan Rah-i-Haq Party and is planning to take part in elections 2018.
If a banned organization is registered under new name in Election Commission of Pakistan then how government can stop terrorist activities against Shia community?
Pamphlet has been written in Urdu and its text says:
“Shias are worst apostates of this world- Haqnawaz Jhangvi (Founder of Takfiri terrorist banned organization ASWJ/SSP/LeJ”
“To kill Shias is religious duty of every Muslim- Tariq Azam( Third head of ASWJ/SSP)”
(Two quotes are mentioned on top of pamphlet after name of the organization which distributed it)
Dear,
Thereek Namos Sahabah wa Lashkar Jhangvi has been established to fulfill mission of Martyrs for companions of Prophet PBUH and of Haqnawaz Jhangvi. Main and basic objective of this organization is to wipe out Shias of Pakistan. For accomplishment of this great and holy mission we need your financial and moral cooperation. We request you to give us more and more donations and to provide our organization more financial help. You can send your donations through Money Order or Easy Paisa.
God Bless you,
Address for Money Order: Hafiz Khalid Mahmoud Social Walfare Office Sarloa Attock
Through Easy Paisa:
CNIC: 37101-1719549-7
Mobile: 03215726871
To: Ashique Hussain(Patron-in-Chief TTSLJ)
Shakardra Attock District Punjab
https://lubpak.com/archives/353884

Husain Haqqani, Pakistan's former ambassador to the US, is a fierce critic of his country's military establishment. In a DW interview, Haqqani calls for a "reimagining" of Pakistan's Islamic state ideology.
DW: In your recently published book, Reimagining Pakistan, you said that Pakistan should be a secular state. Is it really attainable?
Husain Haqqani: The idea of my latest book was born in a conversation many years ago, when Salman Rushdie [novelist] said, "If nations are imagined communities, Pakistan is poorly imagined." There were some valid criticisms about how Pakistan was created in a hurry. The generation before us had to suddenly stop being Indian and start being Pakistani; they needed an ideology. I am a Pakistani by birth, so I don't need it.
In my book, I thought how I could contribute to the process of reimagining Pakistan. The good thing about imagination is that what is poorly imagined can be reimagined. That is why I wrote this book. Chief Justice of Pakistan (CJP) Saqib Nisar Wednesday visited Central Jail Peshawar, where he expressed displeasure over deplorable state of a psychiatric hospital inside the prison.
During his visit to the prison, the chief justice visited different parts of the prison. Justice Nisar inquired why the hospital was inside the prison and whether a hospital is supposed to be in such a state.
KP Health Secretary Abid Majeed told the chief justice that another psychiatric hospital had been under construction since 2012. He added that work on the hospital had not yet been completed for the government was not releasing funds.
During the visit, the chief justice asked the in-charge if patients spent their days lying on beds or there were arrangements for them to pass their time outside.
The chief justice asked where patients were made to sit when they left their rooms. To this, the hospital administration said benches were arranged for the patients when they came out of their wards.
Justice Nisar also summoned Chief Minister Pervez Khattak to the prison, who showed up over the chief justice’s orders.
However, in his conversation with journalists, the chief minister said that he had come to meet the chief justice and was not there for a hearing.
Moreover, during the visit, the IG Prisons informed the chief justice that they will start shifting the prisoners to the new jail from next month.
He made the statement after Justice Nisar expressed dismay seeing the prison overcrowded with inmates.
Prior to this, the chief justice had also visited the psychiatric hospital in Lahore after he received complaints of mismanagement at the facility. The hospital visit was planned over the case of a woman reportedly with mental disabilities, who was on a death row.
On his previous visit to Peshawar, the chief justice had ordered action against bogus clinics and quacks across Khyber Pakhtunkhwa.
https://www.geo.tv/latest/194721-cjp-expresses-anger-over-state-of-peshawar-psychiatric-hospital
No comments: Links to this post 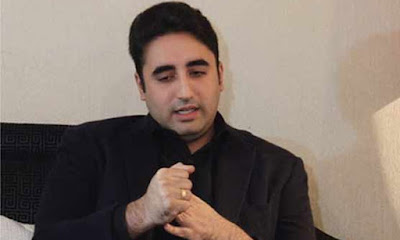 PPP chairman Bilawal Bhutto said that South Punjab would be carved out of Punjab as a separate province by his party.
“We will make South Punjab a separate province if our PPP comes into power,” Bilawal told media persons in Lahore.
His remarks came hours after 20 MNAs and MPAs from South Punjab met Imran Khan and joined his PTI under a written deal to create the new province within first 100 days of the next government.
Bilawal said that Imran Khan had not kept the promises he had made in the last general elections.
“How can Imran Khan establish a new province in 100 days while he could not honor any his promises in five years?” he opined.
“Nobody had supported us when we first raised the voice for South Punjab,” he maintained.
The PPP leader also took a swipe at the leaders of Janoobi Punjab Sooba Mahaz (JPSM), which announced its merger with the PTI.
“Where had they been until now? Why didn’t they raise the demand while they were in power for five years?
He said that Nawaz Sharif was trying to put the entire system at state.
https://www.thenews.com.pk/latest/314674-ppp-to-establish-south-punjab-province-bilawal-bhutto
No comments: Links to this post