THERE is no shortage of text in Pakistan’s rulebooks that can arbitrarily be used to try and control information, even hijack narrative.
From vague clauses about the ‘national interest’ to directives about how ‘institutions’ can be discussed, these are often brought into play to mask what are attempts at outright censorship. It is especially cultural narrative that finds itself in the cross hairs of a myopic bureaucracy with an unnecessarily thin skin.
The latest example of this is the Shoaib Mansoor film Verna, which on Tuesday was banned by the Central Board of Film Censors in Islamabad.
While such a decision is not considered binding on all the provinces, given that the subject has been devolved, and Punjab and Sindh have their own, independently functioning censor boards, the fact is that such pressure from the centre can — and does — have an effect. From various quarters, the vow came that the film would be allowed to play.
While a full board meeting of the CBFC last night apparently decided to revoke the ban, the movie can only be screened with cuts, another name for censorship.
In any movie, if certain scenes are not suitable for audiences of a given age, screening certificates carry an age-advisory clause.
However, the greater question here is, what can there be in narrative fiction, created and produced for mass distribution in a country such as Pakistan (the cultural likes and dislikes of which are well known), that lead to efforts to censor and restrict; fiction by definition lies in the realm of the imagination.
Those in positions of administrative power in Pakistan like to delude themselves that it is their responsibility to decide what citizens may or may not consider suitable, and take decisions accordingly.
In truth, the people have the right to vote with their feet; it ought to be up to them to decide.

Mahira Khan starrer Verna by Shoaib Mansoor, after being approved by Sindh and Punjab censor boards has been banned by the Islamabad Censor Board. The film was due to be released on November 17 but is now pending a full body review to be able to be released in cinemas across Pakistan. Islamabad Censor Board has listed a couple of reasons why the body deems it inappropriate for audiences in Pakistan. The reasons for this ban are irrational to say the least and antithetic to the purpose of art at worst. The first is that it deals very boldly with the topic of rape in the country. The second reason is that the accused in the film, or rather the rapist, is the son of the Prime Minister. The reason for both decisions by the filmmakers is intended to display the power dynamics at play as well, which make it difficult for victims of get justice. Both the reasons seem very petty considering that the issue of rape is very rampant in Pakistan. According to the Human Rights Commission of Pakistan (HRCP), an incident of rape occurs every two hours and an innocent victim is gang-raped every four to eight days. It must be addressed along with the power dynamics which prevent justice. The drama Udaari, discussing child abuse, was also object to in the same manner. Same was the case with the documentary about Lal Masjid, called Among the Believers. We always tend to shy away from the camera portraying the evils in the society. These social issues are certainly taboo and controversial, which is why discussion on these subjects is absent in the society. However, that does not mean that bold issues should not be dealt with because of lack of discourse. Art has always been the medium which helps stretch boundaries of individuals. If you look at Zia’s dictatorial regime, art was the medium used to convey sentiments of resistance - art cannot be snubbed because it adds to the progress of the society. http://nation.com.pk/16-Nov-2017/verna-ban
No comments: 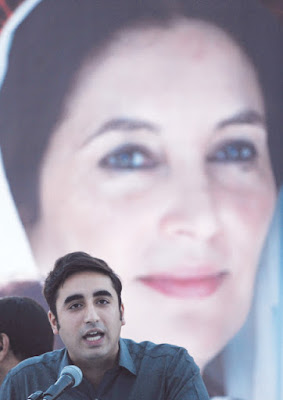 Bilawal Bhutto has ruled out the possibility of early elections, saying that elections will be held well on its due time. He said that rumours like national government were equally popular during the PPP government. Bilawal said PPP had written history by transferring power to a civilian government. He was talking to media persons during his visit to PPP worker Dilawar Butt and renowned columnist Munnoo Bhai. He inquired about the health of both of them and termed party workers as an asset to the party.
He said the PPP is of the view that PML-N made census controversial. People from Karachi to FATA are objecting to it. PML-N is responsible for constitutional crisis in the country and we have decided to swallow bitter spill in the larger interest of democracy. According to him, two different methods have been adopted to pursue NAB cases against PML-N and PPP. We are ready for accountability but Nawaz Sharif and Capt. Safdar (retd) are being treated differently from Sharjeel Memon. "I demand equal treatment with all irrespective of PML-N, PPP or PTI," he added.
He said names of two former prime ministers of PPP are yet in the Exit Control List. He said he respects Maulana Fazl-ur-Rehman but Maulana has stretched himself too far in support of Nawaz Sharif. Maulana should defend his own party instead of PML-N, he advised. He ruled out any possibility of meeting with Nawaz Sharif in near future. 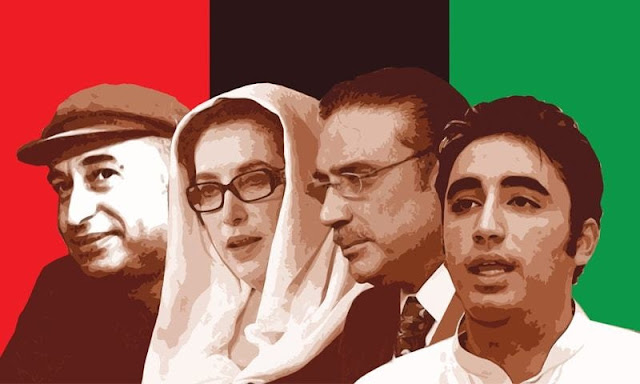 Chairman Pakistan Peoples Party Bilawal Bhutto Zardari has said that intolerance was breeding violence and stressed that tolerance should be promoted for a better society.
In his message on the occasion of International Day for Tolerance observed on Thursday under the aegis of the United Nation, Bilawal Bhutto Zardari said that PPP was in fact a second name of tolerance and patience in Pakistan.
He said his Party faced violence, injustices, hangings, lashes and the worst media trial in the history but its leadership and workers always remained harbingers of tolerance.
The PPP Chairman pledged that promoting and encouraging tolerance will remain part of the Party mission and asked other political parties to follow the footsteps of PPP and play their role in creating a tolerant and harmonious society in the country.

A Taliban faction has made a comeback to Wana, the headquarters of South Waziristan tribal region, imposing a ban on cultural and social activities and restricting the movement of women outside their homes without male members of their family, a local daily reported on Wednesday.

Following the 2009 military operation against Mullah Fazlullah-led Taliban in the northwestern Swat region of Khyber Pakhtunkhwa province (then known as North West Frontier Province), then Army Chief Ashfaq Pervez Kayani had launched an offensive in South Waziristan and had cleared it from control of militants.

In recent days, according to Dawn, the Taliban imposed its strict version of Islam under the guise of peace committee in South Waziristan. The committee is headed by Salahuddin alias Ayubi, a successor of Mullah Muhammad Nazir, an influential Taliban leader who was killed along with his 10 associates in a US drone strike in the Birmil area of South Waziristan Agency in January 2013."The so-called peace committee has issued tough guidelines through pamphlets in Wana town and warned local people to abide by these rules otherwise violators would face repercussions," the report said, adding the committee has banned music, athan (a traditional dance performed in wedding ceremonies or other festive occasions), and use of narcotics.

The committee's guidelines stated that such activities, which promote immorality or violate Islamic teachings, would not be permitted in the region."The movement of women outside their homes has been restricted and they would not be allowed to visit markets and clinics or faith healers without adult male members of their families, including husbands and brothers," the pamphlets said.

Pakistani Taliban had first emerged in 2003 in the South Waziristan Agency, under the leadership of Nek Muhammad Wazir. Talibanisation had then spread to other tribal regions along the Durand Line that Kabul had always refused to recognize as a permanent border with Pakistan. The first US drone strike on Pakistani soil was carried out against Nek Muhammad and he was killed in it. After establishing their writ in tribal regions, the Taliban had moved to parts of adjacent Khyber Pakhtunkhwa province, including Swat Dir, Buner and suburbs of Peshawar.

According to the pamphlets, residents are not allowed to stay outside their homes at public places after 10pm. "This step would prevent disturbance and noise in the area," it said.


A leaflet issued by the peace committee claimed that elders and Ulema (clerics) of Karikot, Ghwa Khwa, Shaheen Warsak, Doog, Dabb Koat, Zari Noor and Sherna had agreed to these steps. A committee comprising elders and clerics has been set up to ensure implementation of the 'code of conduct' and to identify violators of the guidelines. A local cleric, identified as Ameer Ainullah, has been appointed head of the committee.