The protestors belonging to Majlis-e-Wahdat-e-Muslimeen have demanded of the Government and Chief of the Army Staff to take stern action against two colonels of the Frontier Corps for firing on peaceful protestors in the wake of Parachinar blasts.

The demand was made at a demonstration the supporters of the MWM staged in Parachinar on Saturday. The protesters said that Colonel Umar and Colonel Ajmal were highly trigger-happy because they ordered firing on the peaceful protestors in Parachinar yesterday and also in the past.
They said that in the past these two colonels of Pakistan Army also jailed the protesters for six months. They said that firing upon peaceful Pakistani citizens that left many dead and injured and putting them behind the bars for peaceful protest, was tantamount to violation of basic human rights and also brought a bad name to the reputation and prestige of armed forces.
Hence, the protesters demanded that stern action be taken against these two colonels to do justice to the victims of terrorism and victims of these trigger- happy officers’ orders. They said that Shia youths were taken into custody from their houses and they were put behind the bars without producing them in the court of law.
They also demanded that electricity of the area, internet and cell phone service should be restored forthwith.
https://www.bankofamerica.com/sitemap/hub/signin.go
No comments:

JAJ might have been far more appropriate a synonym for the JIT constituted by the Supreme Court of Pakistan to investigate the Prime Minister Nawaz Sharif and his family. Because from its constitution, to its workings, to its interim reports, the JIT appears more to be Just A Joke than a Joint Investigation Team. The entire saga of this wretched ‘body’ has made it entirely non credible by now.
First came the Whatsapp saga whereby the Registrar of the Supreme Court made strange, covert calls to the Securities and Exchange Commission of Pakistan (SECP) and the State Bank of Pakistan (SBP) to dictate the selection of their employees in the JIT. The world over, it is a norm to request the appropriate employee from an institution which is nominated by the head of that institution. The norm was violated, with no explanation as to why. Secondly, the fishy manner it was done in, made the selection of those particular persons for the JIT suspect in the eyes of many from day one. Even if norms were to be broken, even if the earlier order of the five judge bench that had ordered the formulation of a JIT were to be violated, it should have been done in a transparent matter and in writing, giving reasons for requesting particular persons. The SECP documented the bizarre nature of the exchange, but has not received any explanation.
The Prime Minister’s son objected to the inclusion of the two persons in the JIT giving solid reasons as to why they might not be unbiased: Amir Aziz of SBP having been the National Accountability Bureau investigator who had prosecuted the Hudaibia Paper Mills case against the Sharifs in the late 1990s; and Bilal Rasool of the SECP, who is Mian Azhar’s nephew, whose wife was in PMLQ and who currently passionately supports the PTI together with his wife. Neither were these members changed, nor reasonable justifications provided to Husain Nawaz as to why only these two employees from their vast institutions absolutely had to sit on the JIT, denying justice seen to be done.
Next, the JIT has reportedly behaved entirely unprofessionally, possibly criminally with at least three persons they interrogated: Javed Kiyani, who had been detained and investigated for a whole year during the original Hudaibia case, and was eventually acquitted honourably, was reportedly summoned at least three times by the JIT and told to become approver against the Sharif family. He reportedly showed his acquittal file and told it he had no reason to become approver. He refused despite immense pressure from the JIT.
Saeed Ahmed, also tangled in the original Hudaibia case, was allegedly presented with a pre-prepared statement incriminating the Sharifs and told to sign it by the JIT, and repeatedly pressurized to do so. Apparently, he was detained by the JIT from morning till after taraveeh (11.30 pm) and asked intermittently to sign the statement. He too withstood the pressure and was eventually let go.
Meanwhile Tariq Shafi was allegedly threatened with 16 years behind bars if he didn’t take back the affidavit he provided to the JIT. One would assume the affidavit was favourable to the Sharifs’ version of the money trail.
These acts have put grave question marks around the behaviour and credibility of the JIT. These are not acts of investigation, but acts of intimidation and criminal behaviour. A JIT is not authorized to use strong arm tactics to obtain results of its satisfaction, but has to go with findings obtained via professional and non-partisan processes and attitude. When it becomes clear that a body has a specific aim or result in mind, and is trying to satisfy those aims by hook or by crook, it loses the very justification for its existence together with all credibility. This the JIT has accomplished quite well with these acts.
As if all this were not enough, it provided an astonishing interim report to the implementation bench on June 7, with about a hundred pages dedicated to their own complaints against mainstream media anchors/ commentators and against social media users, saying peoples comments on the JIT were hampering their work. The hundreds of pages of samples of twitter comments of various people, or translations of TV anchors’ comments they had included was staggering and perplexing. With only two to three weeks time left before they were to submit their final findings, this was what they had been researching and monitoring and spending human and financial resources on? Not only that, their brief was trying to find answers to thirteen questions, not monitoring the social or mainstream media or threatening witnesses with dire consequences unless they complied. But the act of going crying to the implementation bench with moronic complaints against the public in general was unbelievable. Not only did it earn the JIT anger of the public, but also its contempt and mirth. Twitter at least exploded with memes, with one being ‘rondu’ (crybaby).
This JIT is also on record as having accused the SECP of forging or tampering with data, without any proof whatsoever. The SECP has provided detailed reply with proofs that it did nothing of the sort. However, so far the JIT has not faced any consequences for any of these bizarre acts, including the one of illegal surveillance of the Prime Minister house that it has admitted to in the second interim report.
The million dollar question here is this: why is the farce of this JIT still ongoing when it has so thoroughly discredited itself, and who can be expected to take its findings seriously after all that has gone on? No one in their right mind can now be expected to rely on any findings of this body.
No comments:

A bomb resembling a toy killed at least six children Sunday in South Waziristan.
The bomb exploded while the children were playing with it in Speenmark village in the tribal district.
“Six children aged between six to 12 years, all boys, were killed by a toy bomb and two others wounded critically,” a local government official said. Another local security official confirmed the incident and casualties.
The origin of the bomb was unclear.
South Waziristan is also one of the seven semi-autonomous tribal areas, where the army has for more than a decade been battling militants.
No comments: 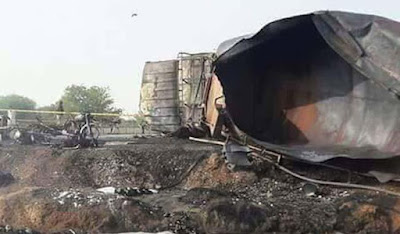 An overturned oil tanker burst into flames in Pakistan on Sunday, killing 153 people who had rushed to the scene of the highway accident to gather leaking fuel, a hospital official said as the death toll continued to rise.
Dr. Javed Iqbal at Bahawalpur's Victoria Hospital in south Punjab said the latest deaths occurred at a hospital in Multan where some of the 50 critically injured, many of whom suffered extensive burns, had been taken.
The death toll could rise further as another dozens are still in critical condition, said Dr. Mohammad Baqar, a senior rescue official in the area. There were dozens of other injuries of varying degree, he said.
Local news channels showed black smoke billowing skyward and horrific images of scores of burned bodies, as well as rescue officials speeding the injured to hospital and army helicopters ferrying the wounded.
The dead included men, women and children. Many were burned beyond recognition, Baqar said, and will have to be identified using DNA testing.
Provincial government spokesman Malik Muhammad Ahmed Khan told the Reuters news agency that 20 children were estimated to be among the dead.
Saznoor Ahmad, 30, whose two cousins were killed in the fire, said the crowd of people screamed as the flames engulfed them.
"The fire moved so fast," he said. When the flames subsided the field was strewn with bodies, and nearby were the charred shells of motorcycles and cars that the villagers had used to race to the scene.
As the wounded cried out for help, residents wandered through the area looking for loved ones.
Zulkha Bibi was searching for her two sons.
"Someone should tell me about my beloved sons, where are they? Are they alive or are they no longer in this world? Please tell me," she pleaded.
The disaster came on the eve of the Muslim holiday of Eid al-Fitr, which marks the end of the fasting month of Ramadan. While Saudi Arabia and most other Muslim countries celebrated the holiday Sunday, Pakistanis will celebrate on Monday.
The tanker was driving from the southern port city of Karachi to Lahore, the Punjab provincial capital, when the driver lost control and crashed on the national highway outside Bahawalpur.
A loudspeaker atop a local mosque alerted villagers to the leaking fuel, and scores raced to the site with jerry cans, said Rana Mohammad Salim, deputy commissioner of Bahawalpur.
“People living in roadside villages, carrying domestic pots rushed to the scene to collect oil and they also made phone calls to their relatives living in other villages to immediate come to collect oil,”Highway police moved quickly to redirect traffic but couldn't stop the scores of villagers who raced to collect the fuel, spokesman Imran Shah told a local TV channel.
When the fire erupted, the same mosque loudspeaker called on the remaining villagers to help put it out.
Mohammed Salim ran toward the smoke carrying buckets of water and sand, but said the heat was too intense to reach those in need.
"I could hear people screaming but I couldn't get to them," he said.
Abdul Malik, a local police officer who was also among the first to arrive, described a "horrible scene."
"I have never seen anything like it in my life. Victims trapped in the fireball. They were screaming for help," he said.
When the fire subsided, "we saw bodies everywhere, so many were just skeletons. The people who were alive were in really bad shape," he said.
Eyewitnesses said about 30 motorcycles that had carried villagers to the accident site lay charred nearby. Eight other vehicles were destroyed, they said.
Some of the most badly burned were evacuated by army helicopters to Multan, about 60 miles away.