Video Report - Election 2020: What could Super Tuesday mean for the future of the Democratic Party? | The Economist

100 Pakistan mercenaries in Syria to fight on behalf of Turkey, says US journalist

Pakistani Shia mercenaries Pakistan have earlier fought in Syria on behalf of Iran, but this will be the first time its nationals collaborate with Turkey in the war-torn country.

A batch of 100 Pakistani mercenaries has landed in war-torn Syria to fight alongside the Turkey-backed Free Syrian Army (FSA), with more expected to come in the near future, ThePrint has learnt.
Sources in the Indian defence establishment said they were trying to find out more about the development.
The fact that Pakistani mercenaries have landed in Syria has been revealed by Lindsey Snell, an American journalist who has covered the nine-year-long-and-counting Syrian war.
Snell, who has reportedly been abducted by an al-Qaida affiliate and even jailed by Turkey, told ThePrint that the information was given to her by a “source in the FSA”.
According to her source, she said, a total of 1,400 Pakistani mercenaries are to join the Turkish-backed group, which is one of the many non-government militias involved in the Syrian civil war.
Snell, however, added that the information had not been independently verified.

Not the first time

The Syrian civil war started in 2011 over concerns such as employment, corruption and democracy but has since transformed into a chaotic conflict involving multiple entities and nations. It is estimated to have killed over 3.6 lakh people until December 2018.
The FSA is one of multiple opposition forces involved in the war, each of them driven by different agendas. Different groups involved in the war are backed by different countries, with Turkish support for the FSA primarily aimed at keeping a Kurdish militia in check in light of a decades-long insurgency at home.
If Pakistan mercenaries have indeed entered Syria, it will not be the first time they play a role in the West Asian nation. In the past, several have fought under the Hezbollah flag, backed by Iran.
“There is a Zainebiyoun militia of Pakistani Shias deployed by Iran in Syria. We are looking into this new development involving Turkey and Pakistan,” a source in the security establishment said.
Sources added that the use of mercenaries in support of Turkey could not have occurred without the blessings of the Pakistani deep state — the ISI. It remains unclear whether the mercenaries in question are drawn from terror groups backed by the ISI or former servicemen.
There are several organisations that recruit former and current Pakistani soldiers as well as civilians to work in security-related jobs in West Asia, where they play a role similar to personnel of the US’ controversial Blackwater private security firm, the Washington-based think-tank Middle East Media Research Institute had said in 2011 while talking about Pakistan’s mercenary business.
Pakistan also formally sent its troops to ally Saudi Arabia, which backs some opposition fighters in Syria (rival Iran supports the Bashar al-Assad administration) on a “training and advice mission” in 2018.
Former Pakistan Army chief General Raheel Sharif (Retd) commands the Saudi-led Islamic military alliance to fight terrorism.
No comments: Links to this post

Bilawal Bhutto lashes PTI for targeting the spirit of democracy 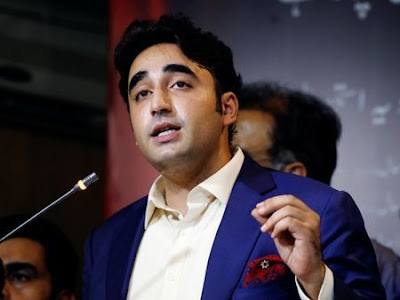 Chairman Pakistan Peoples Party Bilawal Bhutto lashes at the PTI government said on Monday that democracy is being targeted and economic rights of people are being stolen.
Addressing a news conference, Bilawal Bhutto lashes PTI and said, at this time political revenge was on the rise while “democratic struggle is everyone’s interest.
He said, “Today, attacks on democracy are being launched from all sides.”
“The government’s stance malfunctioned from the first day nobody is accepting that Nawaz Sharif went to jail or abroad due to corruption our leaders are in jail due to political revenge,” he said.
“Not even a political opponent’s late brother was sparred,” Bilawal added while referring to former PPP minister Khurshid Shah’s brother.
Bilawal further criticized the ruling Pakistan Tehreek-e-Insaf (PTI) for what he called “economic crisis”, and maintained that the National Accountability Bureau (NAB) and the state’s economy could not function parallel to each other. “After traders’ claim, Imran Khan also admitted that NAB and economy couldn’t run together democratic forces are disunited for some reason.” The current government attacked the media and stopped payments. Not only the political people but the people belonging to different institutions are at the helm of the government. Imran Khan also said that the NAB and the economy could work along.He added Positive criticism is good for the country it should be tolerated.
Today political revenge is on the rise, said Bilawal; he said.
Bilawal Bhutto said that he was surprised to see Sheikh Rasheed still to be the Railways Minister after all the incidents happened. 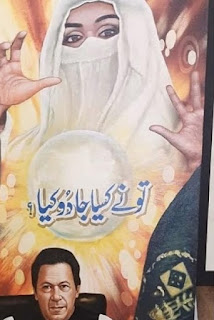 First-time premier Imran Khan is viewed as a rare breed of politician in Pakistan; one who garners immense public support but also enjoys the blessing of the country’s domineering army that has remained at odds with most civilian prime ministers over the past 72 years.
However, after 18 months in power, his government is struggling to revive Pakistan’s teetering economy, and faces increasing domestic pressure due to recurring displays of poor governance.
But his greatest concerns at the moment come neither from the powerful security establishment -- the military and its affiliated organizations -- nor an opposition severely weakened through a concentrated campaign ostensibly focused on rooting out corruption.
It is the deepening cracks within Khan’s party, the center-right Pakistan Tehreek-e-Insaf (PTI), that pose the greatest threat to his government and his hard-earned political status.
Presently, the PTI and its allies are holding the reins in the center and three provinces, including the northeastern Punjab province that is considered the country’s political powerbase.
The other two are the northwestern Khyber Pakhtunkhwa (KP) province, where the PTI was handed a second consecutive term, and the southwestern Balochistan province.
Of the three, KP is the only one where the PTI has full power as both Punjab and Balochistan are coalition governments.
His party stands divided into several groups across its political power bases, something that has affected its performance.
Earlier this year, mounting rifts in his party's KP chapter forced Khan to remove three ministers from the provincial Cabinet. He also issued a "stern warning" to other dissidents reportedly trying to replace his hand-picked chief ministers in Punjab and KP.
In the center, his three confidants -- Foreign Minister Shah Mahmood Qureshi, former Finance Minister Asad Umar and Jahangir Khan Tareen -- are often at loggerheads with each other, and it is publicly known.
"It's unfortunate that our party is not unified. It will harm us in the long run," Tareen, a former PTI secretary general, acknowledged in a televised interview last week.
Despite being barred from holding public office by Pakistan's Supreme Court in 2017 for concealing assets, he is said to be Khan's top aide on matters ranging from political wheeling-and-dealing to managing the country's sugar and wheat crisis.
Power game
The growing rifts among Khan's key lieutenants, analysts say, have led to poor governance both in Punjab and the center.
“The split within the government and party ranks has resulted in bad governance -- the only potential threat to the incumbent setup,” Salman Ghani, a Lahore-based political commentator, told Anadolu Agency.
After every few weeks, he said, the premier is forced to give a "shut up call" to the "troublemakers".
"Instead of fully focusing on the problems facing the masses, Khan's additional responsibility is to deal with divisions in the party," he added.
The power game in Punjab, the country's largest province, Ghani says, is the key to all discords among party bigwigs.
"I hold Khan partially responsible for this bitter power struggle," he said. "Appointing a weak chief minister in Punjab reflects his desire of running the country’s political power base from Bani Gala [Khan’s personal residence in the outskirts of Islamabad]."
Ghani said there were multiple contenders, including Punjab Governor Chaudhry Mohammad Sarwar, for the coveted post, but Khan’s choice was little-known Usman Buzdar.
"Now, there are five centers of power in Punjab," he said, adding that this took a toll on decision-making in the province.
Salim Bokhari, an Islamabad-based journalist, shared a similar view.
"The premier has chaired 70% of Punjab Cabinet meetings to improve the deteriorating governance structure in the province -- a direct result of internal 'leg-pulling,'" he told Anadolu Agency.
Disgruntled allies
Khan’s disgruntled allies, considered to have been holding his otherwise minority governments, also frequently surface as bottlenecks to the cricketer-turned-politician's vision of 'Naya (new) Pakistan'.
His government in Punjab, which has a simple majority, depends on Pakistan Muslim League-Quaid.
Coalition governments in the center, as well as in Balochistan, also include several regional parties, including the Karachi-based Muttahida Quami Movement (MQM), and Balochistan National Party (BNP).
Both the parties, on and off, threaten to quit the coalition, alleging that the government has not fulfilled its "promises".
In January, former Information Technology Minister Khalid Maqbool Siddiqui, a central leader of the MQM, resigned from the federal Cabinet on similar grounds.
"Except for KP, alliances in the center, Punjab and Balochistan are vulnerable as allies have frequently expressed their dissatisfaction with the affairs of the government," Bokhari said. "But again, it is neither the opposition nor the allies but the internal tug of war and poor governance that could drive out the PTI government."
https://www.aa.com.tr/en/asia-pacific/pakistani-premier-grapples-with-internal-rifts/1751605
No comments: Links to this post