Chairman Pakistan Peoples Party Bilawal Bhutto Zardari has directed PPP Punjab to take out ‘Go Nawaz Go’ rallies in every district of Punjab because Nawaz Sharif has lost all credibility and he does not hold himself accountable before the elected Parliament.
He was speaking to the meeting of Executive Committee PPP Punjab held at Zardari House Islamabad. He also instructed to complete party organization in Punjab so that he can visit every district and division and meet the people in Punjab. He informed the meeting that Manifesto Committee of the Party has begun its work and this manifesto will reflect party policy towards betterment of the common people of Pakistan according to Party’s philosophy. He said that Party will work hard and win with the support of people like it performed in Karachi and Gilgit-Baltistan bye-elections.
Bilawal Bhutto Zardari said that there are supporters of Party in every constituency and now time has come for them to become part of ‘Go Nawaz Go’ movement in their area. Qamar Zaman Kaira, Aslam Gil, Chaudhry Aslam Pervez, Asif Khan, Mian Azhar Hussain Dar, Javed Bhatti, Shahzad Saeed, Nadeem Afzal Chan, Mustafa Nawaz Khokhar, Usman Salim Malik, Asim Mehmood Bhatti, Raja Shahjahan Sarfaraz, Hasan Murtaza, Diwan Muhammad Shamim, Haji Azizur Rehman Chan, Haji Falak Sher, Khurram Jahangir Wattoo, Mrs. Samina Gurkhi, Shahid Nadim, Hafiz Asif, Musa Khokhar and Imran participated in the meeting. Syed Nayyar Hussain Bukhari, Chaudhry Manzoor Ahmed and Jamil Soomro were also present on the occasion.
Quran Khawani was also held on the death anniversary of Shaheed Shahnawaz Bhutto and prayers were offered. Senator Farhatullah Babar and Sabir Baloch were present on the occasion. 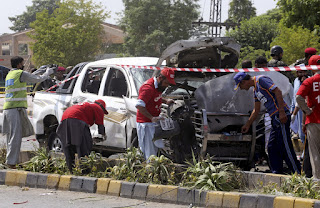 Separate bombings targeted members of Pakistan’s paramilitary border force on Monday, killing at least three troops and wounding eight, officials said.
In the first attack, a Taliban suicide bomber riding on a motorcycle hit a Frontier Corps vehicle in Peshawar, near the Afghan border, killing two troops and wounding seven. A few hours later, a second bomb struck in southwestern Chaman province, also on the border with Afghanistan, killing one soldier and wounding another.
Police superintendent Imran Malik said the Peshawar attack happened on the edge of the Khyber tribal area.
Pakistan’s Tehrik-e-Taliban, an umbrella for Pakistani Taliban factions, was behind the attack, according to a statement by the militants’ spokesman, Mohammad Khurasani.
The attack came a day after the Pakistan army announced it had launched an operation in the Khyber tribal region to rout Islamic State militants it said were operating in the area. The Islamic State in Khorasan as it is known in Afghanistan and Pakistan is based in Afghanistan’s eastern Nangarhar province which abuts Pakistan and the Khyber tribal region.
The local Islamic State affiliate emerged a few years ago, mainly from disenchanted Taliban fighters espousing the IS’ ideology.
The paramilitary force, known as the Frontier Corps, is the front-line force battling militants in Pakistan’s tribal regions stretching hundreds of kilometers (miles) along its border with Afghanistan.
In the Chaman attack, police said one soldier was killed and another wounded but details were scarce because of the remoteness of the area. No one immediately took responsibility for that explosion.
Copyright 2017 The Associated Press. All rights reserved. This material may not be published, broadcast, rewritten or redistributed.
No comments: Links to this post 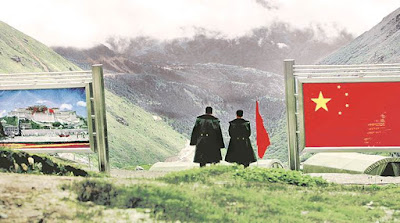 China’s official media on Tuesday “denounced groundless” reports by a section of Pakistani news outlets claiming the death of 158 Indian soldiers in attacks by the People’s Liberation Army (PLA) amid a military standoff along the border with Sikkim.
According to Dunya News, a 24-hours Urdu language news service in Pakistan, the Indian soldiers were killed, and several others were injured, on Monday in a Chinese rocket attack across the border.
India’s external affairs ministry on Monday denied the report, calling it “malicious propaganda”.
A day later, China’s official and mainstream media denied the report.
“Chinese mainstream media outlets on Tuesday denounced Pakistani media’s “groundless” report, which claims that over 150 Indian soldiers were killed in Sikkim due to a Chinese rocket attack,” the People’s Daily online said.
“According to an investigative report released by the People’s Daily on Tuesday, the Chinese embassy in India had noticed the report and has denounced its authenticity. Some Pakistani media outlets claim that the fake news is based on unverified information from social media and the Internet,” the PD article said.
The nationalistic tabloid Global Times also published a report on Tuesday, calling the Pakistani media report “groundless and fake.”
Several other news portals on social media published reports, denying the story.
A report in the Chinese version of the Global Times pointed out that the photographs carried with Pakistani media story were from “…conflict in the Kashmir region.”
On Monday, MEA spokesperson Gopal Baglay said “such reports are utterly baseless, malicious and mischievous. No cognisance should be taken of them by responsible media”.
Border troops from India and China are locked in standoff near the Sikkim border for about a month. But it has not escalated into exchange of fire.
China has blamed New Delhi for the ongoing Donglang (Doklam) impasse, accusing Indian soldiers of trespass and preventing Chinese soldiers from building a road in the region, which is also claimed by Bhutan.
Beijing wants India to withdraw its troops from Donglang before the two sides can open talks. New Delhi says the road, if built, will have serious security implications for India.
http://www.hindustantimes.com/india-news/chinese-media-denounces-groundless-pakistan-news-reports-on-death-of-indian-soldiers-along-sikkim-border/story-IHc7qsyVQxrySBZV4QVaLI.html
No comments: Links to this post

We are one unfortunate nation that feels pride in celebrating murderers. Whether Ghazi Alamdin, Aamir Cheema or Mumtaz Qadri, all of them are celebrated heroes of our people. Once such individuals are dead, society constructs myths to turn them into saints and pious people. People frequently use the word un-Islamic, when they fail to convince their opponents logically or politically. It is this way of looking at things that have led to the grotesque killing of Mashal Khan on his university campus.
More than forty days have passed since the JIT report on the case has been presented and the authorities have failed to take proper action against the responsible ones as per the recommendations of the JIT report. It is certainly shameful that no justice is given to Mashal even after he is no more living. The perpetrators of his killing are roaming free on the premises of university. The report clearly states that Mashal’s murder was premeditated. Mashal was accused of blasphemy to get away with his murder. Failing to take appropriate action against the responsible ones is beyond one’s comprehension. There is no reason why the university’s administration is reluctant to act according to the recommendations of the JIT report.
Failing to act upon the recommendations of the report suggests that our state and its institutions cannot ensure the supremacy of rule of law, and that these JITs are just a way to delay justice enough to make people forget. Societies fail to progress and develop if the law does not rule supreme. A society is certainly a declining one if people who are wronged, fail to seek justice. It is heart-wrenching to observe criminal silence on people’s part whenever such injustices occur.
People lack the patience to listen to any dissenting voice. The state, with aid from the intelligentsia, needs to address the issue of growing intolerance. Likewise, we need to realise the importance of maintaining the rule of law supreme. There are very few religious scholars who can understand the importance of a pluralistic society and promote non-violence. If the above-mentioned issues are not dealt with firmly, we will witness more cases of mob justice.

Pakistan’s Supreme Court began hearings this week on a case that may decide the fate of Prime Minister Nawaz Sharif, more than a year after revelations first emerged about links between his family’s wealth and the Panama Papers investigation.
The revelations led to protests in Pakistan and sparked calls from the political opposition for Sharif’s resignation.  Sharif and his family deny wrongdoing.
In April, a Pakistani court narrowly rejected a motion to disqualify Sharif as prime minister. Instead, it established a joint investigation into reports that linked Sharif’s children to valuable property in central London held through offshore companies.
This month, the joint investigation team issued a 254-page report. It accused the Sharifs, one of the wealthiest families in south Asia, of hiding assets, perjury and forgery.
Included in the report was the finding that Sharif’s daughter, Maryam Nawaz, potentially falsified ownership documents that were dated 2006 but written in a font that was not commercially available until 2007. The resulting furore trended on social media under the hashtag #fontgate.
“The report is a pack of lies,” Sharif said in response.
The Supreme Court will now decide how to respond to the report, which could involve removing Sharif from office or ordering his trial on charges of corruption. Sharif is expected to be summoned to appear before the court in the coming days or weeks.
Elsewhere, repercussions from the Panama Papers continue.
On June 28, U.S. lawmakers introduced bills to curb the abuse of domestic shell companies. Advocates argue that U.S. shell companies can be used to enable criminal behavior, including financing terrorists.
“Just over a year ago, journalists worldwide began publishing the Panama Papers — exposing global webs of anonymous shell companies used to facilitate all forms of corruption and criminal activity,” said Gary Kalman, the executive director of the FACT Coalition.
“While Panama received all the unwelcome attention, U.S. laws are no better.  In many ways, it is easier to hide behind an anonymous company in this country than Panama or any other in the world.”
Earlier this month, in France, a cardboard packaging executive received a one-year suspended sentenceand a $2 million fine after reports by ICIJ partner, Premiére Lignes’ Cash Investigation, that he hid more than $20 million offshore.
On Friday, the U.S. Department of Justice filed a $144 million civil suit in relation to allegations of corruption involving Nigeria’s former oil minister and business associates. The DOJ described one company set up by Mossack Fonseca, Earnshaw Associates Limited, spending tens of millions of dollars to buy luxury real estate in New York City and an $80 million yacht.
“I spoke to you several times about your general behavior, acquisition of assets, etc., asking you to be a bit more careful,” said the former oil minister, Diezani Alison-Madueke to Kolawole Aluko, in recorded telephone conversations disclosed in the court filing.
ICIJ wrote about the links between Alison-Madueke and Aluko as part of the Panama Papers investigation in 2016.