Activists on Friday urged women to get behind the wheel for Sunday's first anniversary of the Women2Drive campaign, which resulted in the arrest of people defying Saudi Arabia's ban on women drivers. "The key to ending the ban imposed on women driving in Saudi Arabia starts with women themselves," said a statement from the Women2Drive initiative, received by AFP. It urged "women who hold driving licences (from abroad) to drive on the anniversary day, June 17, and document their acts." It also urged men to get in the passenger seat and support their wives, mothers, or sisters who decide to flout the ban in the act of protest. The statement called on women to flood the traffic department with applications for driving licences, knowing that women will not get such permits, and then to write to the head of the department to complain. Nearly 600 people petitioned King Abdullah on Wednesday to allow women to drive in the only country in the world they are banned from doing so. The petition urged the monarch of the ultra-conservative kingdom to "encourage women who have obtained driving licences from neighbouring countries to begin driving whenever necessary." They also called on the king to "establish driving schools for women and (begin) issuing licences." The petition thanked the king, a cautious reformer, for giving women the right to vote in municipal elections set to take place in 2015, saying "our initiative is not aimed at violating laws." "We only want to enjoy the right to drive like all women over the world," said the petition signed by Manal al-Sherif, the icon of an Internet campaign launched last year urging Saudi women to defy the ban. Many women have driven since the campaign was launched last year and many have been arrested and forced to sign a pledge that they will never drive again, activists say. One group of defiant women drove cars last June in response to calls for nationwide action to break the ban. The campaign, which spread through Facebook and Twitter, was the largest mass action since November 1990, when 47 Saudi women were arrested and punished after demonstrating in cars. No law specifically forbids women in Saudi Arabia from driving, but the interior minister formally banned women from doing so after that protest. Women with the financial means hire drivers, but others depend on the goodwill of male relatives to get around.
No comments: Links to this post

Pakistan's Supreme Court has ordered strict action in a bribery case involving Chief Justice Iftikhar Muhammad Chaudhry's son and a real estate tycoon. Wrapping up the case, a two-member bench ordered Attorney General Irfan Qadir to take strict action against the chief justice's son Arsalan Iftikhar, real estate tycoon Malik Riaz and the latter's son-in-law Salman Ali Khan, Dawn reported. Justice Jawad S. Khawaja read out the short order after Thursday's proceedings. "It is our expectation that he (the Attorney General) will set the machinery of the case in motion so that all those who may have committed any illegal acts, including Malik Riaz Hussain, Dr. Arsalan, Salman Ali Khan etc are pursued and brought to book with the full force and rigor of the law," the 14-page order read. Not only was the Pakistan Supreme Court's credibility questioned, the bench said, but allegations were also levelled against the chief justice and the judiciary. It added that bribery is a sin, and both givers and takers of bribes were sinners. On Tuesday, Riaz had detailed before the court the alleged payments he made to Arsalan Iftikhar over the past three years, including for his foreign visits, stay at high-end hotels in London and Monte Carlo, and picking up his gambling losses. About the reasons for taking the suo motu notice of the case, the Bench stated that such a notice was necessary to counter the erroneous perception about the Supreme Court being created due to media reports. The court ruled that Riaz attempted to "buy justice" through bribery, and that he had grown into a habit of buying everything with money. He fuelled kcepticism and raised doubts on the apex court's credibility.
No comments: Links to this post 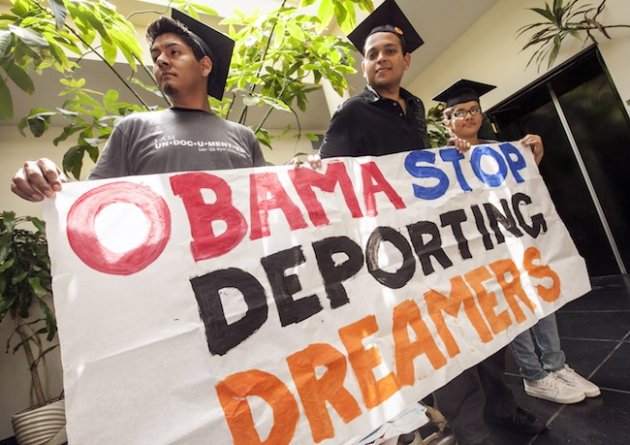 The White House will halt the deportation of as many as 800,000 young illegal immigrants and in some cases give them work permits, in a sweeping new initiative announced by the Department of Homeland Security. People under 30 who entered the country illegally or overstayed their visas when they were under the age of 16 will be immune from deportation if they have not committed a significant misdemeanor or felony and have graduated from a U.S. high school or joined the military. They can apply for a renewable two-year work permit that won't provide a path to citizenship but will allow them to work legally in the country. Applicants will have to prove they've lived in the country for five consecutive years. Homeland Security Secretary Janet Napolitano told reporters on Friday that she believed the move "is the right thing to do," and will help the agency focus on deporting criminals. "It is not immunity, it is not amnesty," she said. "It is an exercise of discretion so that these young people are not in the removal system." Young people will have to proactively apply and pay for the temporary legal status at a local United State Citizenship and Immigration Services office. If the deferred status is granted, they can apply for a work permit. "I wouldn't say we are encouraging people to step forward," an Obama administration official told reporters. "We are making a process available and people can make their own decision." President Obama will address the change in a speech at 1:15 pm. Young people who were brought into the country illegally or overstayed their visas as children are commonly referred to as "Dreamers," referencing the title of a decade-old bill that would have given them legal status if they joined the military or attended college. The Dream Act passed the House nearly two years ago, but was blocked by Republicans in the Senate. Opponents of the bill have argued that it would encourage more people to enter the country illegally, while supporters say it helps people who were brought up as Americans and whose lack of status is not their own fault become full members of society. President Obama has faced criticism from the crucial Hispanic electorate for ramping up deportations under his tenure and for failing to deliver on his campaign promise to pass comprehensive immigration reform within his first year in office. Several times in the past year, Obama has told Hispanic audiences who asked him why he did not issue an executive order halting deportations of some classes of immigrants that such a move would be legally impossible. "There are enough laws on the books by Congress that are very clear in terms of how we have to enforce our immigration system that for me to simply, through executive order, ignore those congressional mandates would not conform with my appropriate role as President," Obama told one Dreamer who asked him why he couldn't halt young people's deportations in July. It's unclear what made him change his mind. "We've been hearing all sorts of things from the White House, that it's not legally possible, that it's not politically possible," said Erika Andiola, a 25-year-old Arizona-based Dreamer and advocate who has met with administration officials on the subject. "I can't even believe it. We've been working for this for so long." The move may generate enthusiasm among many Latinos: 85 percent of registered Latino voters said in a Latino Decisions poll that they support the Dream Act. The president enjoys a strong lead among Hispanic voters over Mitt Romney, but a lack of enthusiasm among these voters could mean they stay home on Election Day in swing states like Nevada, Colorado and Florida. During the primary, Mitt Romney said he would veto the Dream Act, but in recent weeks he has seen open to a proposal by Sen. Marco Rubio to grant Dreamers a worker permit but not a path to citizenship. Republicans have rushed to criticize the move as an executive overreach. "This decision avoids dealing with Congress and the American people instead of fixing a broken immigration system once and for all," wrote Sen. Lindsay Graham, one of the few Congressional Republicans who supports immigration reform.
No comments: Links to this post

An orchestrated campaign was launched against Dunya TV by nefarious elements. Talking to Dunya News, senior politicians and journalists revealed that certain insignificant media groups in league with nefarious elements launched a well-thought out conspiracy against Dunya News and its workers to thwart media-group’s swift progress. Dunya newspaper is in the offing and its popularity has threatened the vested interests. Thousands of Dunya News workers have vowed to valiantly defeat this conspiracy. Rana Azeem - the president of Punjab Union of Journalists - said that those involved in such anti-media propaganda would not succeed in their cause. "Dunya News achieved exemplary success in short span of time" he added. PPP s deputy parliamentary leader in the Punjab Assembly Shukar Basra said Dunya News raised its voice against the dictators and always kept public interest in view. PML-Q leader Chaudhry Zaheeruddin vowed to support Dunya News and asked its administration to continue serving the masses through unbiased reporting. He also said that the matter should be taken to the court and those involved in the conspiracy should be brought to justice. PML-N leader Ayaz Amir said leaked off-air footage of the program is being used by various media groups as a tool to fuel anti-Dunya News sentiments. Inamullah Niazi, member of PTI said that leakage of the footage was a violation of privacy law.
No comments: Links to this post

Pakistan Peoples Party Parliamentary leader in the Punjab Assembly Zulfiqar Gondal has urged the Punjab chief minister to refrain from misusing the development funds allocated in the provincial budget 2012-13 for various sectors on the PML-N’s election campaign. Speaking at the chamber of opposition leaders on Thursday, he said, the Punjab budget was a mere eyewash in which no relief was given to the poor, alleging that Shahbaz Sharif kept billions of rupees with him to run his party’s election campaign. Last year, he said, he had allocated Rs 9 million for the use of his helicopter while in this budget Rs 39 million were earmarked which he said consolidated their doubts that he would recklessly use the helicopter for his election campaign. He said the PML-N leadership’s blaming the federal government for load shedding was abstruse as his own government could not add a single megawatt of electricity to the national grid during the last four and a half years. Answering a question, Gondal said the Sharif brothers will not hold local body elections because they know the results will not be in their favour. He demanded the government to present a complete report regarding the Services Hospital fire in the House.
No comments: Links to this post

Funeral prayers of Ghazal maestro Mehdi Hassan was held on Friday amidst thousand of mourners. His Funeral prayers were held in an open ground near Noorani Mosque at the area of Ancholi in Karachi. Speaker National Assembly Nasir Ahmad Khoro, MQM, Pakistan People Party leaders and many singers, actors and stage drama actors, admirers and friends also attended the funeral prayer. After funeral prayers he was buried in Shah Muhammad Shah graveyard.
No comments: Links to this post