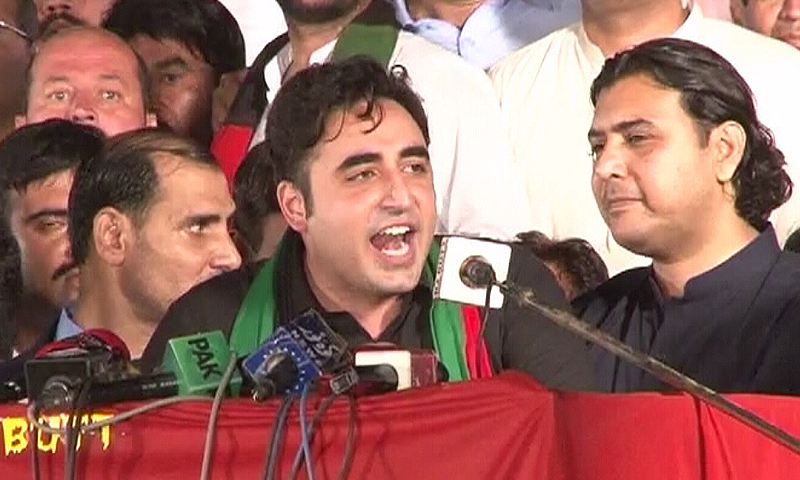 Govt fails to provide any relief to people who are facing worst-ever economic crises in country Asks people to get ready for fresh elections.

Pakistan People’s Party (PPP) Chairman Bilawal Bhutto Zardari said that we were all set to throw away ‘selected’ rulers imposed on the people of country, a year back through ‘rigged’ elections.
He was addressing big public gathering in Islamkot on Wednesday.
Speaking to the charged crowd gathered from various parts of the desert district and other areas of the region, Bilawal said that the days of misrule of Imran Khan-led PTI government were numbered and asked the people to get ready for the fresh election so that they could elect their true representatives to lead them from the front and give them relief.
“We have begun our decisive protest movement by staging the huge power show first in Karachi and now in Thar and are moving to other parts of the country to create awareness and to mobilise the people to get rid of the incompetent rulers, who according to him, had made lives of people miserable,” he added.
The PPP chairman said that PTI puppets had failed to run the country and had compromised on the issue of Occupied Kashmir adding that they would soon throw them away.
He reiterated that National Accountability Bureau (NAB) and economy of the country could not go together, adding that NAB was formed by a dictator to use a tool to politically victimise those believing in the true democratic values. He said that under the given situations, it would be difficult for PTI government to survive when all the democratic forces with massive public support were getting ready to massively protest against government for its flawed and anti-people policies.
Bilawal also came down hard on PTI government for launching the controversial projects including power plant at Chashma-Jhelum Link Canal, the appointment of a member in Isra despite the protest by Sindh government. He said that water of Sindh’s share was being stolen adding he would resist against the injustice and would not allow anybody to occupy Karachi.
He said that he was equally proud of freedom fighters including Rooplo Kolhi and brave Thakurs, who had fought against the invading forces adding he was also proud of legendary Marvi and peasant leader Mai Bakhtawar.
The PPP chairman said that he was delighted to see the green Thar after years of droughts.
He lashed out at the federal government for its failure to provide any relief to the people, who were facing the worst ever economic crises in the country. He said that though Imran Khan was himself a ‘wicked’ man but those supporting him in Sindh were also against the prosperity of Sindh and Pakistan.
He said since the all opposition parties were on the same page to get rid of such insane rulers, who were creating the hatred and unrest among the provinces by their illegal moves and policies.
The PPP chairman highly lauded the efforts of both Sindh government and the mining firm, which accomplished their task of power generation much before the scheduled time and hoped that more power plants in other blocks would bring the revolution and would greatly help overcome the power crisis in the country. He said that federal government had created number of the hurdles but the PPP leaders including Asif Ali Zardari were focused on the mega projects to fulfill the dream of his slain mother Ms. Benazir Bhutto, who had visualized tapping the resources of Thar including the huge reserves of coal. He said that power being generated here in Islamkot was being pumped into Faisalabad but PPP government had already decided to provide the one-hundred unit of power free of cost by footing the bills of the people of consumers. He said that nobody would be allowed to steal the resources of Thar adding he asked the federal rulers to make mockery of the people of Thar.
Sindh Chief Minister Syed Murad Ali Shah speaking on the occasion said that the people gathered in the public gathering in Islamkot would be enough to topple the PTI government adding he said Bilawal Bhutto Zardari would soon become Prime Minister of the country. He announced to establish a university in Islamkot very soon. Nisar Ahmed Khuhro, Senator Aajiz Dhamrah, MNA Dr Mahesh Kumar Malani and other PPP leaders also spoke on the occasion.