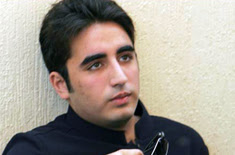 Chairman Pakistan Peoples Party Bilawal Bhutto Zardari has stressed that Federal and Provincial governments should carry out special initiatives to bring nation’s 1.5 million street children into the mainstream enabling them to contribute their full potential for the country’s progress.
On the International Day for Street Children being observed in many countries in the world, the PPP Chairman said that it was the responsibility of the state and the government to provide equal and adequate facilities to street children.
“It is terrible that over 100 million children are growing up in the urban streets of the world and 1.5 million of them are in Pakistan alone,” Bilawal Bhutto Zardari pointed out and stressed for legislation to facilitate them to become responsible and potential citizens of the country.
He endorsed the campaign #OurTime17 by an international organization Consortium of Street Children and emphasized for more coordinated global efforts to improve the lives of street children and protecting them from falling into wrong hands to pose threat to the future societies.
Bilawal Bhutto Zardari said that PPP manifesto for 2018 elections will contain special initiatives for the betterment of children and protection of their rights including those of wandering in the urban streets without any solace.