Would pull govt down now if I could: Bilawal Bhutto Zardari 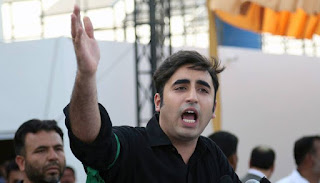 The Pakistan People's Party Chairman, Bilawal Bhutto Zardari, said that he would oust the government then and there if he could.

He said the PPP wants to remove the government within the ambit of the Constitution. He said that PPP would not be part of any conspiracy to topple the government unconstitutionally. He said that he was asked if he was acceptable to the establishment but he had the criterion to be acceptable to the people.
He urged Opposition Leader in the National Assembly Shahbaz Sharif to return to the country and play his role in the prevailing situation. Talking to the media after visiting the residence of party member Jameel Ahmed Manj to express condolence over the death of his mother, Bilawal said the nation would reject the opposition parties if they don’t come out to support them. He announced holding rallies against inflation. He said people would certainly raise the question to the opposition parties in the next polls over their performance. He said for the sake of the poor population of the country, the PPP is ready to move ahead with any political party.
The purpose behind his opinion of the party stalwarts and devise a strategy to rid the country of present rulers who are running the government through magic. He said that ministers, instead of consulting Moody’s and Bloomberg, should contact people to register the actual situation of the economy.
To a query, he said the court gave a remarkable verdict on Article 6 and stated that a traitor is a traitor, his definition cannot be changed. To a question, he said Maryam Nawaz should be granted permission to see her father. He said an incapable leadership is ruling the country and the entire nation is aware of this fact, but the government is shifting blames for its own failures to previous governments.The PPP chairman said people are being murdered economically and instead of asking the IMF, the rulers should ask the nation about their performance. Referring to the MQM and the PML-Q, the two main allies of the PTI government, Bilawal said neither the people of Karachi nor the people of Gujrat are happy over this alignment.
Expressing solidarity with the journalists community, he said the PPP expressed profound grief over the killing of journalist Aziz Memon and the Sindh government could also think of setting up a judicial commission on the demand of the family of the deceased. He said the PPP wouldn’t compromise on the interests and rights of the nation.