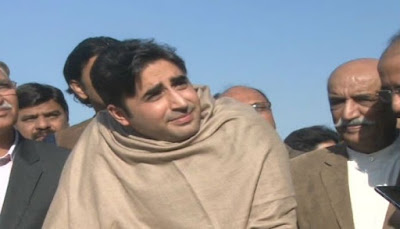 Pakistan Peoples Party Chairperson Bilawal Bhutto Zardari advised political opponent and former prime minister Nawaz Sharif to take retirement from politics.
While speaking to media in Islamabad on Monday, the PPP chief remarked: “What more does Nawaz want from politics?”
Nawaz should take a retirement for the betterment of democracy and Pakistan Muslim League-Nawaz, said Bilawal.
On PPP’s future plans, Bilawal shared that he will share the party’s plan of action during the PPP rally in Islamabad.
The PPP leader said that Nawaz-government has not remain serious in governance from last four years. He said that from last four years the country did not have any foreign minister.
On November 30, Pakistan Peoples Party Chairperson Bilawal Bhutto Zardari on Thursday said it was demoralising to see the writ of state erode.
The PPP chairperson was addressing a press conference on the occasion of PPP's golden jubilee celebrations.
“It was demoralising for my entire generation to see writ of the state erode, to see the abject surrender of the state, to see the rule of law made a mockery of, to see the freedom of press strangled," said the PPP chairperson in regards to the Faizabad sit-in and the subsequent agreement reached to end the protest.
Commenting on the country’s political situation, he further said that the conditions had deteriorated in recent times.
Bilawal had also announced that PPP will hold a rally at Islamabad's Parade Ground on December 5, in honour of party's golden jubilee.