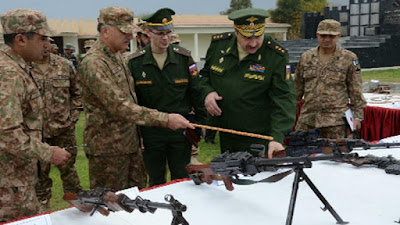 In an unprecedented development, Pakistan Army on Thursday took a Russian military delegation headed by Deputy Chief of General Staff Colonel General Israkov Sergi Yuryevich to North Waziristan Agency to give them firsthand account of the country's anti-terror gains. This was the first time any Russian military delegation was taken to the region once considered a hotbed of local and foreign militant outfits. The development suggests ever increasing ties between the two countries, who remained bitter cold-war rivals for years. An Inter-Services Public Relations handout said the delegation was briefed about Pakistan Army's efforts to clear FATA from terrorists of all hue and colour. The visiting Russian military officers were also briefed about border management on the Pak-Afghan border and socio economic development projects in the area.
"The delegation acknowledged and appreciated Pakistan Army's achievements in the fight against terrorism and efforts to bring stability in the region," added the statement.
Cooperation between the armed forces of Russia and Pakistan has grown in recent times. In September 2016, a contingent of Russian ground forces arrived in Pakistan for the first ever joint Pak-Russia exercises. Around 200 military personnel of both countries participated in the drills. The special operations drills codenamed 'Druzhbha-2016' - a Russian word meaning 'friendship' - saw Russian troops and Pakistani special forces working in close cooperation. Building upon the cooperation, Russian Navy's largest anti-submarine warfare ship Severmorsk arrived in Pakistan for participation in the Aman 2017 international naval exercises in February 2017.