Top PPP leader Asif Ali Zardari has left for Dubai from where he will fly to the United States on January 17 to attend the inauguration ceremony of US president-elect Donald Trump. 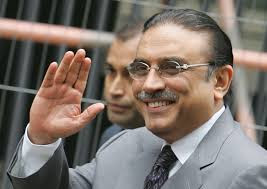 Trump, who defeated Democrat candidate Hilary Clinton in November 8, 2016 US elections, will take oath on January 20 in Washington. Interestingly, Trump has invited only former president Zardari from Pakistan to his oath-taking ceremony.
The former president returned to Pakistan after his 18-month-long self-exile on Dec 23 and announced plans to enter parliamentary politics along with his son – the PPP chairman Bilawal Bhutto Zardari – on Dec 27, during a rally at the 9th death anniversary of the PPP’s slain chairperson Benazir Bhutto.
During his visit to the US, Zardari will also attend the farewell dinner of President Barack Obama on February 2. Bilawal is also expected to join him on January 25 after the PPP’s Lahore-Faisalabad rally, which is scheduled to be held on January 19.
According to the PPP sources, the party’s leaders are expected to meet the outgoing and the new US administration, adding that these meetings have been set.
Besides US-Pakistan ties, issues related to Pakistan-India relations, Afghan Policy and the China-Pakistan Economic Corridor (CPEC) will also come under discussion during one-on-one meetings with the US authorities, including the Congressmen and senators.
Sources at the Bilawal House said the agenda of the meetings of Bilawal Bhutto Zardari is to improve the soaring relations between Pakistan and the US. Zardari will also undergo a medical examination in the US and is expected to return to Pakistan in the first week of February.