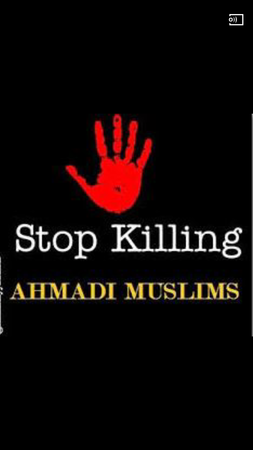 YOU are free; you are free to go to your temples, you are free to go to your mosques or to any other places of worship in the State of Pakistan. Muhammad Ali Jinnah 11 August 1947
In the heart of every minority residing in Pakistan lives the tightly coiled nightmare of persecution. Every time a minority is attacked or their rights abused, the above often quoted and considered Charter of Pakistan stands mocking in the faces of the persecuted. The continued one sided response of the Government has focused a serious concern on the predicament of minorities in a country that is generally considered a homogenous Muslim nation.

The recent arson of the Ahmadiyya owned chipboard factory at Jehlum followed by the torching of Ahmadiyya place of worship, has once again proven the claims of the Government merely to be biased. One is completely taken to awe by the justice authorities provided in compensation to the loss of the owners of the factory and the members of Ahmadiyya Community…three of its members arrested instantly… Great job done!
Make no mistake; the government has only exercised a complete implementation of the recently Established National Action Plan which clearly declares that the ''elements spreading sectarian violence will be prosecuted.''
The continued persecution without prosecution for decades has fueled the violation of the rights of minorities particularly Ahmadies in Pakistan. The hate speech can often be observed in the form of pamphlets and wall chalking in several cities. Posters declaring the members of the community ''heretics'' can be seen on the mirrored walls of the shops. From target killings to mass violence and pogroms this community holds a long history of suffering.
Ahmadies were constitutionally declared non-Muslims in 1984. Since then they have been deprived even the right to live. They are not allowed to call themselves Muslims.
While they have to declare their beliefs as incorrect to obtain citizenship the others have to sign on the passport form to certify that Ahmadies are non-muslims and their founder as an imposter. Anyone can file a blasphemy case against Ahmadies claiming that their religious feelings are injured for any reason. They are not allowed to carry out their religious practices nor to preach their faith to anyone.
The verdicts of killing Ahmadies, looting and plundering their properties to attain entry into paradise are openly circulated by the Mullahs who blindfold the public with their luscious speeches exploiting religion as their tool.
One can imagine the response of the Muslims today, if they were deprived from worshipping and following their beliefs in the west as a reaction to the recent Paris attacks. But one is amazed at the peaceful reaction of Ahmadiyya Community, who at each and every barbaric and inhuman act committed to them, response peacefully.
''We only pray to Allah to guide these people and that He may protect us from their brutal activities'' said, Ahmad, one of the members of the community, whose family was displaced along with six others after an infuriated mob set ablaze to their houses in Arafat colony Gujranwala.
Five-year-old Hira Tabassum, eight months old Kainat Tabassum and their grandmother Bushra Begum were burnt alive in the incident. Before this Ahmadiyya mosques were attacked in Lahore, Punjab during Friday prayers leaving 94 killed and more than 120 injured.
The community is so much hated that even their dead have not been spared. Over hundred Ahmadi graves were desecrated in Lahore in 2012. Series of such horrific and tragic events continue to take lives and plunder the properties of Ahmadies residing in Pakistan. One can speculate the current Pakistan to be completely against the ideology of its Founder Muhammad Ali Jinnah who declared:
''Ahmadies are Muslims. If they say they are Muslims then, no one, not even the Sovereign Legislature, has the right to say otherwise''
(Muhammad Ali Jinnah 5 May 1944)By Haseeb Ahmad