Heading into the second Democratic presidential debate, Hillary Clinton seems to be winning her party back. 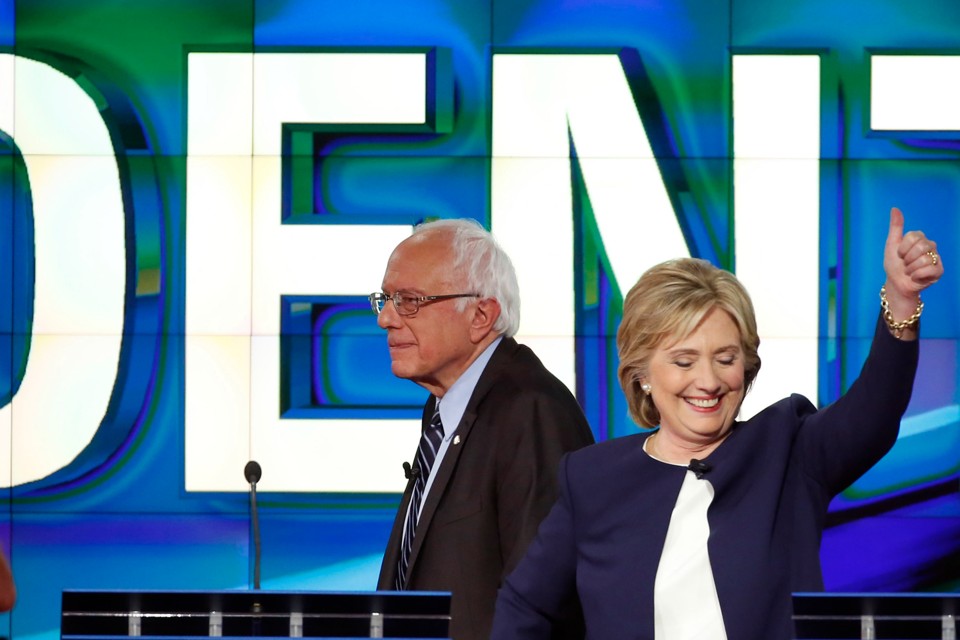 Polls taken in the last two weeks show Clinton widening her lead over Bernie Sanders, as she’s used sterling performances in the first Democratic debate and amarathon session before Congress to blunt the momentum Sanders had seized over the summer. When the two meet Saturday night in Iowa, the pressure this time will be on Sanders: Can he sharpen his contrast with Clinton without veering into the kind of negative attacks that he repeatedly promised to avoid?
Clinton has benefitted from a number of developments in the last month—and not all of them her own doing. Vice President Joe Biden’s decision not to seek the nomination deprived establishment-minded Democrats of another alternative to the former secretary of state. And the dubious choice of House Republicans on the Benghazi committee to have her testify for 11 hours—while harping on emails from Sidney Blumenthal—played to her advantage by allowing her campaign to portray her appearance as one of resilience and grace under fire rather than the long overdue reckoning for a dithering diplomat.


Still, Clinton deserves some of the credit. Her campaign was understandably mocked when it informed The New York Times that Clinton would suddenly become more spontaneous, warm, and funny. But the plan seems to have been executed well. Her appearances on late-night talk shows have been filled with smiles and not-too-cringe-worthy jokes, and despite getting lower ratings, Clinton’s cameo on Saturday Night Live won stronger reviews than did Donald Trump's recent hosting gig. When Clinton has stumbled, such as when shelaughed in response to a man saying he wanted to “strangle” Carly Fiorina, it has been overshadowed by news from the increasingly bizarre race on the Republican side. On the whole, a more joyful Clinton has replaced the halting, defensive candidate of the spring and early summer.

Sanders, meanwhile, has been hemmed in by his own tactical decisions. His dismissal of Republican attacks on Clinton’s email use in the State Department won cheers from Democrats in both camps, but his subsequent avowal that the ongoing FBI investigation was legitimate sounded like a belated attempt to take it back. And Sanders has an even narrower line to walk as he tries to take a more aggressive posture toward Clinton. The media tends to make little distinction between “drawing a contrast” and “attacking,” so when Sanders made some implicit criticisms of Clinton’s record at the Jefferson-Jackson Dinner in Iowa, the Clinton camp immediately accused him of ditching his pledge against negative campaigning. It’s easy to imagine Clinton having ready a more-in-sorrow-than-in-anger reply for any sharp words that Sanders directs her way in Saturday’s debate.
“There are two very different governing visions between Clinton and Sanders that really have not been fully fleshed out for voters.”
All of this might explain Clinton’s stronger position in the polls. A national survey by the Times and CBS News released on Thursday found that Clinton not only held support from a majority of Democratic voters—52 percent to 33 percent for Sanders—but she was seen as the candidate most likely to bring “real change” to Washington. That latter finding strikes at the core of Sanders’s message that a “revolution” is needed to root out corruption from the political system and reduce the gap between the rich and the poor. While Democrats found Sanders to be more genuine than Clinton, she inspired more confidence in regulating big banks and financial institutions—another key aspect of his platform.
Those results could also reflect the fact that Clinton has narrowed the gap in policy with Sanders by embracing calls for debt-free college, get-tough policies on Wall Street, and more aggressive action on immigration, gun control, and criminal-justice reform. Her platform has quieted criticism from some progressive activists who have pushed leading Democrats to adopt an “Elizabeth Warren-style” agenda. “Generally speaking, there’s not a big debate about which direction the Democratic Party should go,” said Adam Green, co-founder of the Progressive Change Campaign Committee. “All candidates are advocating for a more economic populist Democratic Party. The debate has been how big to go and how exactly to get there.”
Democratic voters may see Clinton’s platform as more realistic than the more expensive agenda Sanders is proposing, or simply that she is the more viable candidate to achieve it. In explaining Clinton’s growing lead, Green suggested that the onus was on Sanders to explain the reasoning behind his vision in a way that inspires Democrats to come out and vote. “There are two very different governing visions between Clinton and Sanders that really have not been fully fleshed out for voters,” Green said. “Given her background and frontrunner status, the tie basically goes to Clinton.”
The focus of Saturday’s debate, which will air on CBS at 9 p.m. ET, will understandably shift more toward foreign policy and national security in the wake of the coordinated attacks in Paris that killed more than 120 people. “There is no question that the emphasis changes dramatically,” Steve Capus, the executive editor of CBS News, told the Times late Friday. Both Clinton and Sanders released statements of solidarity with France. They will likely face questions of whether they would expand President Obama’s war against the Islamic State and whether the Paris attacks should give the U.S. pause about taking in refugees fleeing Syria.

The debate also offers another chance for Martin O’Malley, who continues to struggle to make himself a legitimate threat to either Clinton or Sanders. He’ll at least get more speaking time without competition from Jim Webb or Lincoln Chafee, who dropped out after shaky performances in the first debate. (That opportunity might be limited more by the fact that the debate was scheduled for a Saturday night, a source of frustration for many Democrats.)
For Sanders, the challenge of stopping Clinton’s surge is clear, and reports suggest the famously unpolished candidate is preparing more for this contest than than he did for the first one. Clinton’s strategy is more of a mystery. While she has consolidated her frontrunner status in the primary, the same polls show that more voters overall view her unfavorably. Will she take on Sanders as she did in October, or will she focus her attacks on the Republicans she hopes to face a year from now? The choice Clinton makes will show just how comfortable she with the solid footing she’s regained.