Michelle Obama Makes a Star Turn at the Oscars

She may not have walked the red carpet, but Michelle Obama — all bangs and biceps and bling — had her own star turn during Sunday night’s Academy Awards ceremony, when she announced the winner for best picture via satellite from the White House. 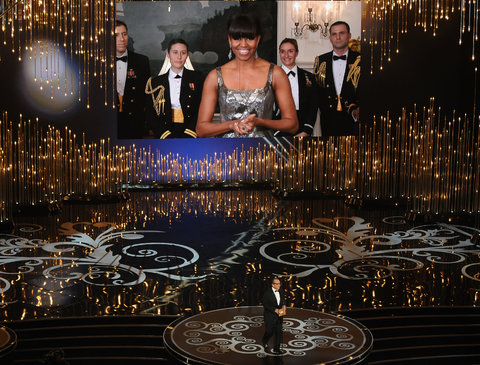 Barely moments after Mrs. Obama’s late night revelation of the fate of the nominated best films, the question of whether it was proper or dignified or awesome for the first lady of the United States to dirty her hands with a motion picture envelope disintegrated into a predictably-partisan rhubarb. But this seemed to matter little to the White House, where both President Obama and the first lady seem untethered from the safety net of a political campaign, and free to pursue their respective agendas. “The Academy Awards approached the first lady about being a part of the ceremony,” said Kristina Schake, a spokeswoman for Mrs. Obama. “As a movie lover, she was honored to present the award and celebrate the artists who inspire us all, especially our young people, with their passion, skill and imagination.” The idea to have Mrs. Obama participate in the ceremony was hatched by the producers of the show, with a big hand from the film executive Harvey Weinstein. Mrs. Obama agreed right away, but secret negotiations, including a final one involving a stealth flight from Los Angeles to Washington a few weeks ago to finalize details, ensued. “Literally from the first day we were hired we thought, ‘How can we make this special?’” said Neil Meron, who was hired last fall to produce the Oscar event with Craig Zadan. “We were hoping Obama would win so we could have our plan executed.” After the election, they decided the plan would need a fast track, lest it get stuck in the bureaucratic maw maw of the East Wing, so the two approached Mr. Weinstein. “We were very aware that Harvey was close to the Obama family,” Mr. Zadan said, “and if we went through normal channels the odds were small it would happen.” Mr. Weinstein reached out to the White House, originally with the idea of having Mrs. Obama be a guest at the awards show. The plan was for her to sneak backstage to morph into a secret Oscar presenter. But because the first lady had a conflict that night – the governors would be in town for a White House gala – the idea of a remote play was born. (Others involved with the process insist that the idea was actually that of Mr. Weinstein’s daughter, Lily, but like most Hollywood stories, one picks their own ending.) Only two top executives at ABC knew of the plan, along with the actor Jack Nicholson, who was charged with presenting Mrs. Obama from the stage in Hollywood. Mr. Meron and Mr. Zadan were given a private jet for the flight to Washington, although they told people they were going to New York to avoid suspicion. Mrs. Obama, wearing a shimmering gown designed by Naeem Khan, was hand-delivered the shiny classified envelope opening containing the winner, “Argo,” the Ben Affleck-directed film about a C.I.A. plan to rescue Americans from Iran during the hostage crisis, by Bob Moritz, the chief executive for PricewaterhouseCoopers from New York, which certifies the awards. White-gloved White House military social aides stood in the background. But Washington was as absorbed about the propriety of a first lady having such a central role in the Oscars, suggesting it was less proper than, say, a president throwing out a baseball pitch or flipping pancakes in Iowa in the courting of voters. “Now the first lady feels entitled,” said Jennifer Rubin, a conservative blogger for the Washington Post, “with military personnel as props, to intrude on other forms of entertaining, this time for the benefit of the Hollywood glitterati who so lavishly paid for her husband’s election.” Others were more charitable. The Web site Slate pointed out that Laura Bush taped a “What Do the Movies Mean to You?” segment for the Academy Awards while she was first lady in 2002 and that President Franklin D. Roosevelt opened the 13th Academy Awards ceremony by addressing the nation and the crowd at the Biltmore Hotel. The first lady’s Oscar turn followed her appearance last week on NBC’s “Late Night with Jimmy Fallon,” where, to kick off the third year of her “Let’s Move” exercise campaign, she presented a comedy sketch, the “Evolution of Mom Dancing.” The sketch was an instant hit. Though only posted last Friday, it had racked up almost five million views on YouTube as of Monday.