Obama crams for debates, works on being concise

On long flights to swing states in the West and late nights at the White House after his children have gone to bed, President Barack Obama is cramming like a student for a test that could determine his political future. 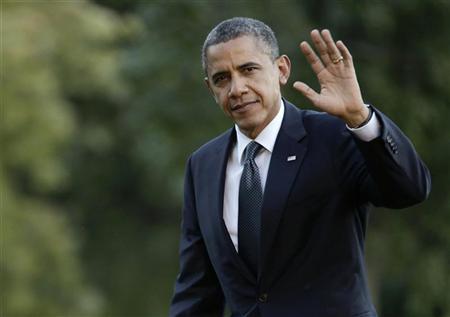 The subject? His opponent, Republican presidential nominee Mitt Romney. The test? His face-off with the former Massachusetts governor at their first one-on-one debate next month. With the race still tight despite Obama's slight lead in the polls, the stakes are high for both men to perform well at the three debates this fall and gain momentum toward sealing the November 6 election. Forced to juggle his governing and campaigning responsibilities, Obama is squeezing in debate prep when he can. "We don't have the same luxury that Romney does in terms of time," Obama's chief campaign strategist David Axelrod said. That means Obama uses flights to Nevada, Colorado and other election swing states on Air Force One to read up on Romney's positions, or studies in the evenings at the White House when he's in town. "He's spent a lot of time reading material and most of it is familiarizing himself with what Governor Romney said in this campaign," Axelrod said. "I mean, he's pretty conversant with his own record but he wasn't very conversant with Romney's." Obama will sharpen his debating skills against Senator John Kerry, the 2004 Democratic presidential nominee, who will play Romney in mock sessions. Aides want him to work on being brief - a departure from his tendency to be long-winded, which can turn off TV viewers and make him look aloof. "He's got to speak shorter, that's all," Axelrod said. "He just hasn't had to do that for the last four years so that's a part of the discipline of preparing for these debates." Romney's sparring partner is Ohio Senator Rob Portman, who has played the president in several mock debates in recent weeks. Portman told reporters on Friday that Romney was "doing great." ROMNEY NEEDS TO STRIKE BLOWS Now that the two parties' conventions are over, the debates are the last high-profile, set-piece events left to shape the race for the White House. The first encounter at the University of Denver in Colorado on October 3 will focus on domestic policy while the second, at Hofstra University in New York state on October 16, will allow audience members to ask questions. Vice President Joe Biden and Representative Paul Ryan face off in Danville, Kentucky, on October 11 in the only vice presidential debate. The final match between Obama and Romney, in Boca Raton, Florida, on October 22, will focus on foreign policy, a strong point for Obama. If polls stay the same until the debates begin, Romney will need to strike a rhetorical blow strong enough to reverse Obama's momentum. He gained some experience in doing that while knocking out a series of Republican opponents in a series of debates held during his party's primary elections. "Romney is at a considerable advantage going into the debate because of the sheer amount of GOP debates he successfully navigated only months ago," said Republican strategist Ron Bonjean. "Although Obama is an incredible speaker, he doesn't often hold news conferences or allow himself to be challenged." A one-on-one debate with the president naturally elevates the challenger, and historical precedence shows the incumbent often loses the first debate. But Romney has disadvantages. Voters view him as less likeable than Obama, a quality that could be magnified on the debate stage, and the wealthy former private equity executive is more prone to gaffes than his Democratic opponent. Romney challenged Texas Governor Rick Perry to a $10,000 bet during one of the primary debates, reinforcing an image of being out of touch with average Americans. "Romney needs to ... show he's ready for prime time after multiple gaffes, connect with people in a genuine way and lay out actual plans for how he'd govern. So far, he's failed on all three counts," said Democratic strategist Doug Hattaway, a former adviser to Hillary Clinton's 2008 presidential campaign. "President Obama will need to win back independents who gave him a chance in 2008 and re-inspire the new voters who turned out in great numbers to put him into office," he said. "The debates offer a good platform to do both." Both campaigns are engaging in a familiar political strategy ahead of the debates: raising expectations for the other guy. "Mitt Romney had many, many debates and he was very good in them," Axelrod said. "By and large when he needed to bring it, he did. He memorizes his set pieces and he delivers them well. He obviously has no hesitance at all about going after someone." Romney already is predicting Obama will be less than truthful at the debates, sewing seeds of doubt in viewers' minds that Obama's words can be trusted. "I think he's going to say a lot of things that aren't accurate," Romney told ABC's George Stephanopoulos last week. "And you know, I'd be tempted to go back to that wonderful line by Ronald Reagan, 'There you go again.' But you can't use something that." Obama's team has raised doubts about Romney's truthfulness, too, and former President Bill Clinton already used a version of Reagan's famous line to describe Republicans during the Democratic convention.